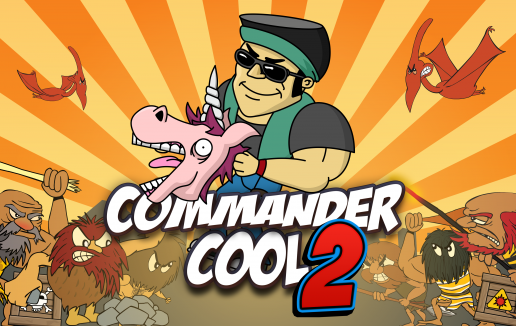 Commander Cool 2 is a run and gun platformer by German studio Orlyapps, featuring a time travelling protagonist and a colourful cartoon world. It’s also, unfortunately, devoid of anything to set it apart from any other platformer available on PC. While the game itself is perfectly functional, the mechanics and design philosophy seem as if the developers just aimed to meet the minimum expectations of the genre and never dared to venture further. This might be in Early Access still, but even now you can tell that this game isn’t going to challenge the greats of the genre.

Commander Cool 2 is a fairly standard platformer as far as mechanics go. Movement is handled with the arrow keys, jumping with space and shooting is mapped rather uncomfortably to Q. Levels are short affairs, the longest of which are around two minutes, and they lack the branching paths that have become almost standard for the genre that would have added a sense of progression and movement to your platforming. Each level comes with three different achievements for collecting all coins, meeting a speedrun time and not dying, although I found that the required times are often too lenient. Levels also contain a collectable diamond, each of which unlocks a costume for the main character which range from uninspired to mildly amusing. Eventually the levels will start throwing standard platformer mechanics at you – moving platforms, giant enemies to outrun, switches and teleporters among other things. There was not a single mechanic in the current build of the game which I haven’t seen in an earlier title though, and Orlyapps seem to struggle with designing levels which show off the fun that can be had with these mechanics.

Looking through the game’s synopsis reveals a list of empty promises. For example, the game promises 90+ levels, but only the first thirty Stone-Age-themed levels are available with the rest marked “coming soon”. I can’t help but feel that this is an abuse of the Early Access system on Steam; what was originally designed to help developers launch novel but niche ideas is being used by Orlyapps to release a game before it’s finished for a little extra money and press. The thirty Stone Age levels are not much more than a tease, able to be completed in less than two hours, which doesn’t fare well for the upcoming sixty levels either. Similarly, the advertised 30+ enemies is technically true, although many of them share behaviour and will just run back and forth on their platform trying to hit you. The same problem is evident in the 9+ weapons, which all do comparable things to one another. On a side-note, the much toted rainbow shooting unicorn head is funny at first but loses appeal immediately upon the second firing. 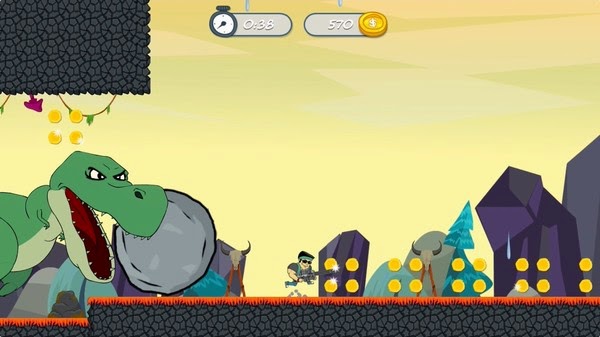 Commander Cool 2 also offers co-op multiplayer and a simple arena mode. Having a partner in the platforming levels adds absolutely nothing to the gameplay, since the difficulty isn’t adjusted at all and the game is perfectly playable and enjoyable on your own. The arena mode is a fun distraction if you can convince someone to play with you, and it’s a shame that there is no single player option for it. I would’ve actually preferred to have seen the arena mode integrated into the main story, as it would have varied the gameplay enough to keep me engaged.

It’s a bit worrying already that Commander Cool 2 is a sequel to an iOS exclusive title which uses a mix of bland, pixelated sprites and art assets that look like they’re directly lifted from Metal Slug. To Orlyapps’s credit, everything you see in Commander Cool 2 is original and some of the art is admittedly good. The same can be said about the music, which is catchy and evocative but all too often muddled by some obtrusive sound effects.

Through the combination of uninspired mechanics, clumsy level design and a dearth of memorable content, Commander Cool 2 lacks any potential as a platformer. The premise might have flown on the app store where good platformers are few and far between, but on the Steam platform and up against both indie developers and big publishers Commander Cool 2 starts looking like a tiny fish in a vast ocean. Orlyapps notes on its website that one day they would like to make “a game that has a soul and which we ourselves would enjoy playing”. Here’s wishing them the best for the future, since despite my hardest efforts I couldn’t find much soul in Commander Cool, and I’m not sure that, as far into development as it is, the game will acquire this soul by the time it hits full release.