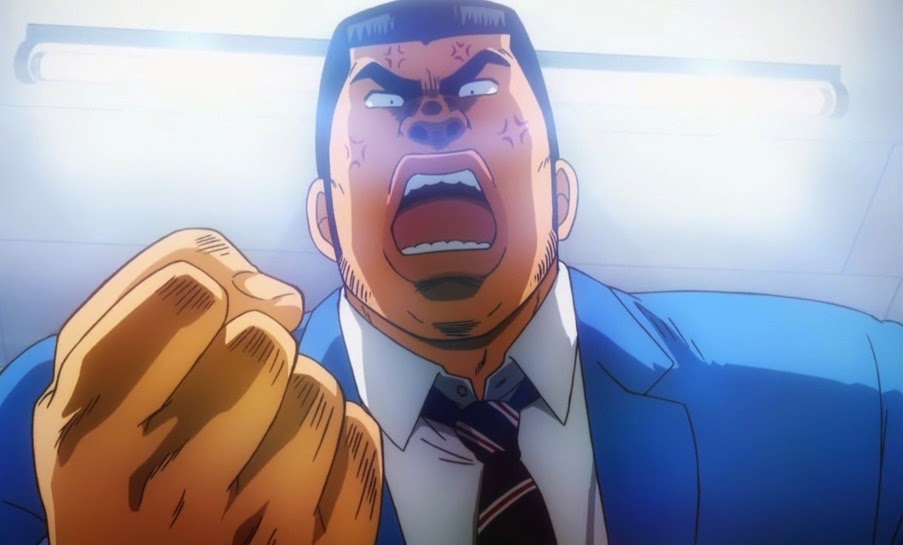 The story of an outcast’s journey to acceptance is one that transcends cultures and time itself, from old testament bible stories to Rudolph the Red Nosed Reindeer. It’s no mystery why it resonates with a myriad of audiences from all across the age spectrum; there’s a very human inclination to sympathise with the plucky fellow who’s either in over his head or unjustly subjugated to cruelty. My Love Story!! (Ore Monogatari) is a refreshingly modern take that endeavours not to depict its protagonist as an unrealistically oppressed charity case but still positions him as the odd man out.
Incidentally, “odd man” is indeed an apt descriptor of Takeo Gouda. His brutish, endomorphic physique – 2m in height and 120kg in weight – has him towering above his classmates and his bulbous countenance is hardly the spitting image of beauty. Passersby don’t instinctively cower away from him in a cartoonish manner, but his well-intentioned actions are often interpreted by others as having a sinister air to them. He found niche social acceptance in the form of clubs (which played to his physical prowess) and a childhood friend, but Gouda has this silent, almost passive-aggressive stigma pasted onto his skin.
In terms of redeeming features, Gouda is more down-to-earth than the absurd statistics of his build would imply. Studying is not his forte and he’d rather spend his afternoons cooped up playing video games in his messy room. Much of his dialogue would pass for charming in the body of a bishie, but comes off a tad eerie when juxtaposed by his hulking stature and gruff voice. 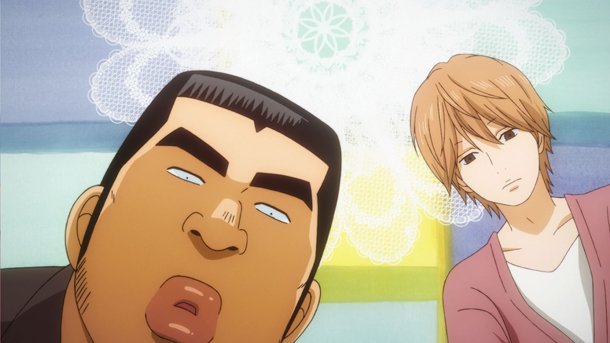 There to solidify his role as an object of compassion is a strong sense of justice, which leads Gouda down the figurative road to Lover’s Lane when he saves a young woman, Rinko Yamato, from a sex offender on the train one day. Given Gouda’s body image and that his best friend, Makoto Sunakawa, is the apple of his school’s eye, Gouda fears he has no shot at dating the lovely Yamato.
Yamato very much follows the sweet, innocent girl archetype so far, but I suspect we’ll see her fleshed out in future episodes as her past is revealed. She has an apparent infatuation with Gouda rather than the beguiling Sunakawa (who tags along with Gouda almost indefinitely and thus was definitely noticeable) and whether her affection is based solely on one heroic act or something deeper will be an interesting mystery. Maybe she’s just a sucker for that big, manly nose?
Sunakawa, meanwhile, plays the role of the supporting friend to a tee, but he also lends the show a rather inventive dynamic by dwelling simultaneously “above” Gouda and precisely on his level. The way Sunakawa acts around Gouda versus the rest of the world has this heart-warmingly pleasant legitimacy to it that I’ve yet to see any anime capture so organically. He’s definitely going to complement Gouda’s more eccentric moments by keeping him in check, but perhaps he’ll also function as an unexpected roadblock to Gouda’s romantic escapades. 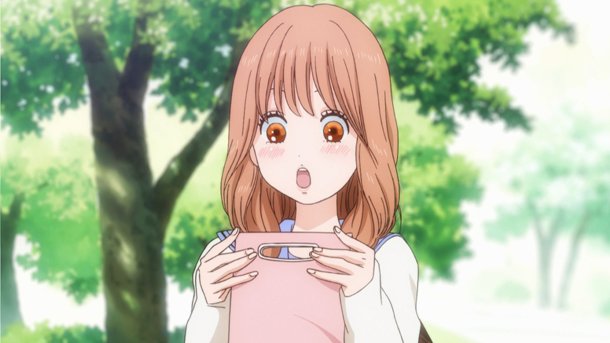 Who would have guessed the show about an unappealing human colossus would be one of this season’s best? A blend of A-grade teen comedy and cleverly written human relationships, My Love Story!! is positively ace so far.