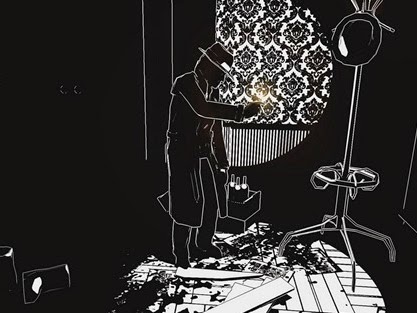 The indies are producing some truly awesome stuff for consoles at the moment. White Night is coming to us from OSome Studio, and it looks incredible.

It’s apparently a homage to classic horror titles such as Alone in the Dark. As you’ll see in the trailer below it seems to be taking place in a deserted mansion deep in the countryside. Where this game is different, however, is in its art style; it’s noir. Very, very noir.

For those who aren’t familiar with noir – it’s a distinctive aesthetic that was really popularised by novels from the likes of Raymond Chandler and then turned into films a couple of decades ago (with Humphrey Bogart being perhaps the most famous actor to make the genre his own). Although the genre’s sheer popularity has waned somewhat in the years since, it remains a popular approach to aesthetic design and theme thanks to the heavy use of darkness and shadow as an easy visual metaphor representing the dark underbelly of society. And so the genre has persisted on to this day, with a modern examples such as Sin City, and other games, such as Goichi Suda’s Killer is Dead, taking heavily inspiration from noir.

Despite what you should think would make for an easy crossover, noir themes have rarely been used in the horror genre, and so we’re very keen to see how White Night turns out. Is it more mystery than horror? Is it more action or adventure? We only get a hint from the short trailer below, but we can’t wait to experience the whole game ourselves.

The best news is we won’t have to wait long to experience it – it’s going to be available on March 3.

Related reading: It seems to be the season for indie horror games, with NightCry also looking exceptional.

Here we go: the first English screenshots of Eiyuu Senki on PlayStation 3