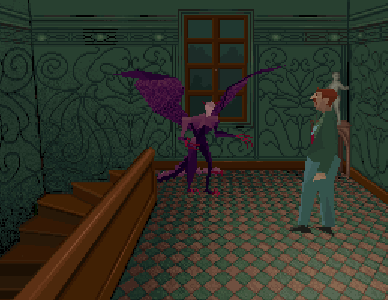 Before Resident Evil became the definition of survival horror, there was Alone in the Dark. A truly groundbreaking game, Alone in the Dark was released in 1992, and was one of the very first to feature full, 3D environments and because that visual style was so new, it offered an intense action horror experience that simply hadn’t been seen previously.

And now that game, in all its ancient glory, is available on the iPad, courtesy of Atari and The Kung Fu Factory. It’s a very simple port that doesn’t even try to update how that original game played, so let’s get some of that out of the way first:

Alone in the Dark is too primitive to be truly scary any more. As you play you’re still have respect for the monsters, and assuming you haven’t already played the game so many times by now that you’ve memorised it, you’ll still be concerned about opening any given door because you just know that there’s something behind it, but that trepidation does not come because the monsters are frightening.

It’s because the game controls like hell. Silent Hill – the original Silent Hill – has a better control system than Alone in the Dark. This is a game with tank controls that turn so slowly that unless the creature is right in front, the time that it takes to turn the hero around is going to be simply too long and the monster is going to be able to close and to do damage. Weapons aren’t always useful either, since the process of aiming and then firing the weapon is so long that if the enemy is within attacking range it’s going to land a hit, and if that happens the attack is broken and the next attack will likely come in too quickly to be able to reset the weapon. I’ve lost count of the number of times over the years that I’ve seen the Game Over screen because a single enemy has reduced my character’s life from full to zero without giving a single opportunity to retaliate.

Alone in the Dark has also aged very poorly, as with most early 3D games. Backgrounds are pre-rendered and blurry 2D graphics, and the 3D characters that move over the top of these images are blocky and lack any kind of personality (or menace, in the case of the monsters). Back in the day it worked because it was a completely new approach to game design, but now it is looks and feels truly artificial. 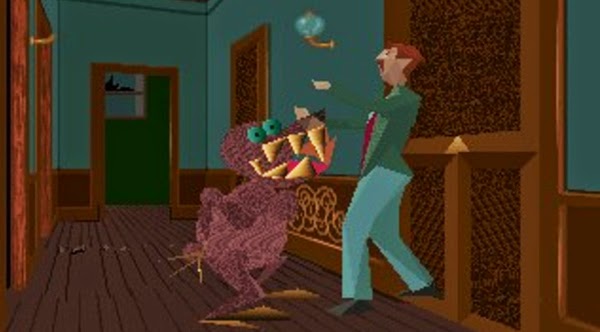 But despite all this, Alone in the Dark is a historical artefact, and well worth playing for anyone who has an interest in he genesis of he horror genre. Thematically it makes good use of the Lovecraftian style, kicking off with placing players in control of either Edward Carnby or Emily Hartwood who are investigating a supposed butt very strange suicide within a large and now inhabited mansion. Not every monster can be defeated by physical force, and instead players need to solve puzzles wherever possible in order to bypass the monster challenges.

It’s also worth noting that the game is largely non linear. The entire game is a single mansion, but players are largely free to explore as they feel fit once they’ve completed an introductory sequence. Given how relentlessly linear horror games are now, this simple feature alone is a breath of fresh air. The game had simple controls in the first place, but they’ve been recreated as virtual controls on the iPad nicely, and the extreme slow pace of the game means that I never had a moment where the virtual controls got in the way.

Lovecraft fans will get a kick out of the references to the horror maestro’s body of work that are scattered throughout the mansion as well. From Deep One through Necronomicon it’s all there. As primitive as the game is by modern standards, Alone in the Dark is a true classic, and for a dollar or so on the iOS it’s well worth playing, either for nostalgia value or to experience the very formation of the horror genre.

Pokémon anime Mega Evolves in America on May 31