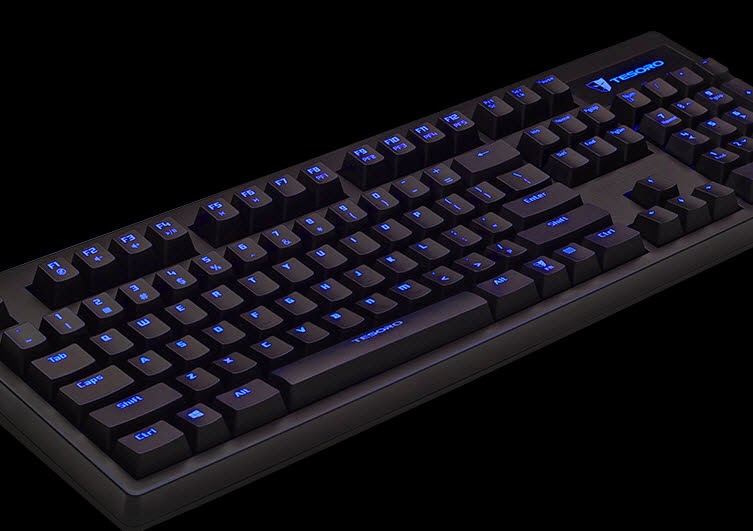 The term ‘gaming keyboard’ indicates additional functionality above and beyond just precision typing. But that implies that it should also do typing very well, and while I spent more than enough time using my mouse and keyboard for gaming, I actually use my keyboard for traditional typing even more. For me the Tesoro Excalibur G7NL LED Backlit Mechanical Gaming Keyboard blends both of those purposes expertly, creating a precision typing instrument that also has gaming utility.

So the first and most important part of any keyboard for me is how well it types. That may seem like an obvious one, but keyboards have got it wrong in the past. In terms of design and appearance, the Excalibur reminds me a great deal of the Durandal offering by Tesoro. The layouts are very similar with key size and location. Since the Durandal is my primary keyboard for writing articles or emails for work, there was no adjustment period for using the Excalibur. For typing purposes, the Excalibur comes out well ahead of something like the Manticore, which had oddities like a half-sized backspace key, wider dimensions to the board itself and keys that lacked the precision of a true mechanical keyboard.

The build of the Excalibur is sturdy as well. It is not a terribly flashy board in and of itself. There is a Tesoro logo in the upper right, but otherwise there is very little extra trim around the edges of the keyboard which is a simple black rectangle. It fits perfectly on my lap or in front of the PC in a variety of spaces. It is not quite as stylized as the Durandal and one thing I liked about the Durandal better was that it had a wrist rest that could be attached. No such luck here. However, I like the weight and grip of the Excalibur better. This is a hefty keyboard, and it has rubberised ridged pads on the bottom (both when you lay it flat and when it is propped up using the kickstand legs in the back) so it does not slide around at all.

Another point of aesthetics is the backlighting. The keys look really sharp with clearly cut lettering that has a blue illumination that shines through. There are five settings (off, dim, bright, pulsating and two different common-key gaming arrangements). Because I am usually working in a dim office at work or den in my home, the lowest illumination setting does the job quite nicely. The brightest setting is actually very bright. Not that the need should be there in a well-lit room, but the glow of the keys on the brightest setting can still be seen in a bright office. The first game-lighting combination is WASD, spacebar, F8-F12, Enter, the arrow keys and 2,4,6 and 8 on the numpad. The second combination keeps the above keys and adds numbers 1-0 across the top as well as shift, control and alt.

There are some additional features for users looking for shortcuts. For those looking to control their multimedia, the F keys serve as play, mute, volume control and more. Additionally you can toggle between regular and gaming modes on the keyboard (essentially serving as profiles). There are five profiles that can be switched through, so I can use different macros for different games, or players. There are no independent gaming specific keys like on the Manticore, but keys can be programmed and this allows the Excalibur to keep its narrow profile. While I appreciated the additional keys on the Manticore for some games, the width of that keyboard made it about two inches too wide to sit in my lap properly in an office chair when I wanted to lean back and type. The Excalibur has no such space issues.

The Tesoro Excalibur G7NL LED Backlit Mechanical Gaming Keyboard’s versatility and incredibly solid build design help to it apart from many of the other keyboards out there. It does not have as many independent keys or buttons as some gaming keyboards on the market, but the Excalibur makes up for that with a durable build and precision keys that serve those who keyboard frantically to folk looking for some convenient shortcuts.

This keyboard can be found on the Tesoro website