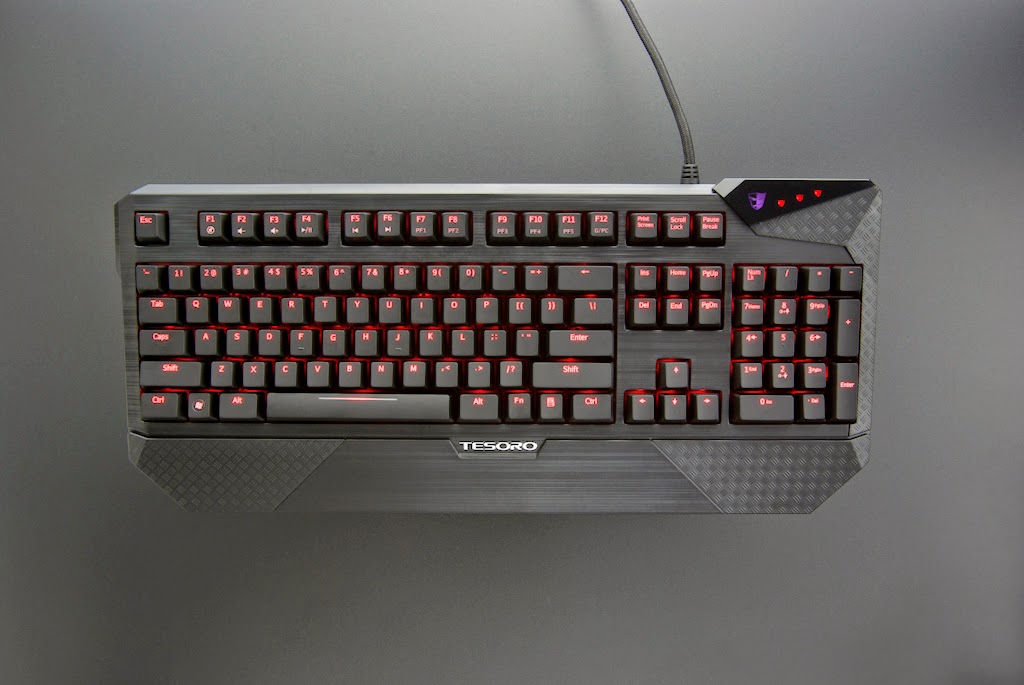 Something about the Tesoro Durandal Ultimate G1NL Mechanical Gaming Keyboard clicked with me almost the moment I took it out of the box. It feels sturdy, looks sharp and keys immediately felt good and tactile. The form is definitely there, but the function is even more important, and I came away quite impressed with what this keyboard had to offer.

Visually, this is a very sweet-looking keyboard. The blue backlighting can be shifted between different brightness levels and even set to pulsate. Each key is individually lit, and it looks sharp. The keys are quite visible from several feet away, even in a mostly but not entirely dark room. A handful of helpful lit icons in the upper right corner help to navigate things as well. All of this illumination is quite handy because I have a tendency to play in a dimly (if at all) lit den. I am a sucker for dark electronics, and the dark greys suited my aesthetic tastes nicely.

The braided cable is lengthy enough to reach the PC with ease, at around six feet, and the keyboard itself feels substantial, yet is not too large. I like to game with a keyboard in my lap when I am in my recliner, and this one sat between the armrests comfortably in those instances. When I put it on the desk, it did not slide around any and the keyboard itself was at a comfortable angle. It is worth nothing that this keyboard also feels very solid. It is a little bit heavier than some of my other recent keyboards, but that only helped increase the perception that it was really well made. 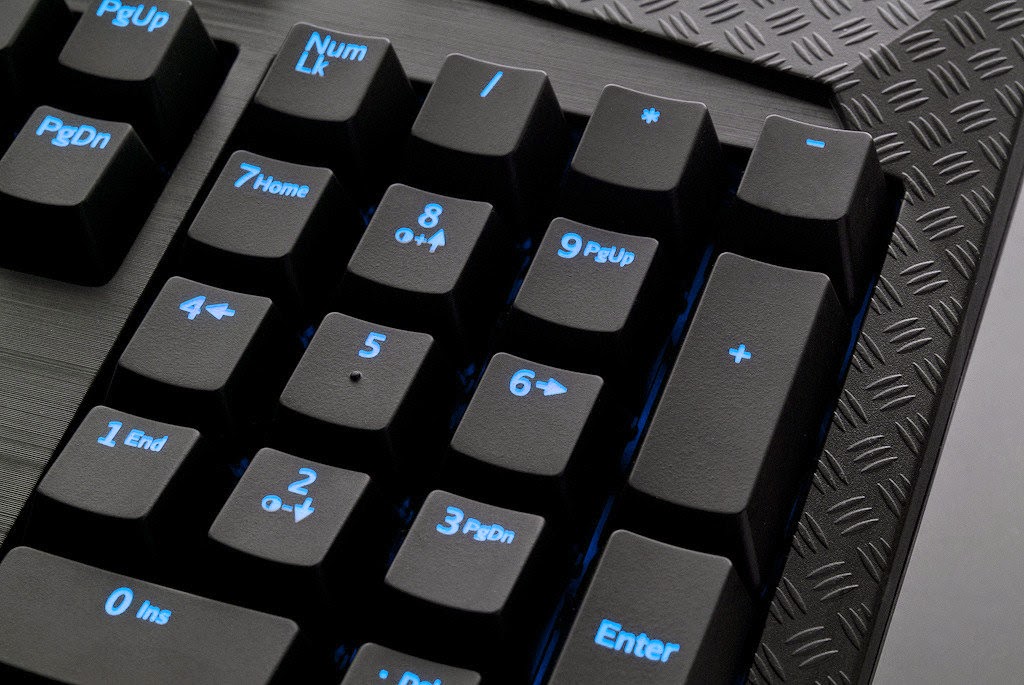 The keys themselves were all traditionally sized and incredibly responsive. Touting cherry mechanical key switches, there was the perfect amount of click and the typing experience was incredibly responsive. I do a lot of writing – not just for this site but also fiction writing in my spare time. When this happens, I can very well spend hours straight in front of the computer, typing away from a variety of angles as I move about in my chair or put my keyboard on the desk in front of me.

I am a very firm and fast typist, so a few straight hours of use from me is some serious key punching, but the Durandal felt accurate and crisp from start to finish. It is however, a somewhat noisy keyboard. If you are someone who spends a lot of time writing at it and commonly share a room with people, it might get on their nerves. Another keyboard we reviewed in the past was much quieter, a feature that our Editor-in-Chief Matt praised. For me it was something of a non-issue since I tend to use this in my den, which the door closed or closed most of the way, with a set of headphones on as I game or listen to music while writing.

There are several other convenient features worth going over. One is a detachable wrist rest for the bottom of the keyboard. I do not use these when I have the keyboard on my lap, but I do when I have it resting on my desk. I actually have a gel wrist rest for keyboards that do not come with this – so having that option is nice. There are also a few handy ports on the keyboard. There are a pair of USB 2.0 connections as well as some jacks for headphones and speakers. These combined with the multimedia short cut keys make this very handy to use. 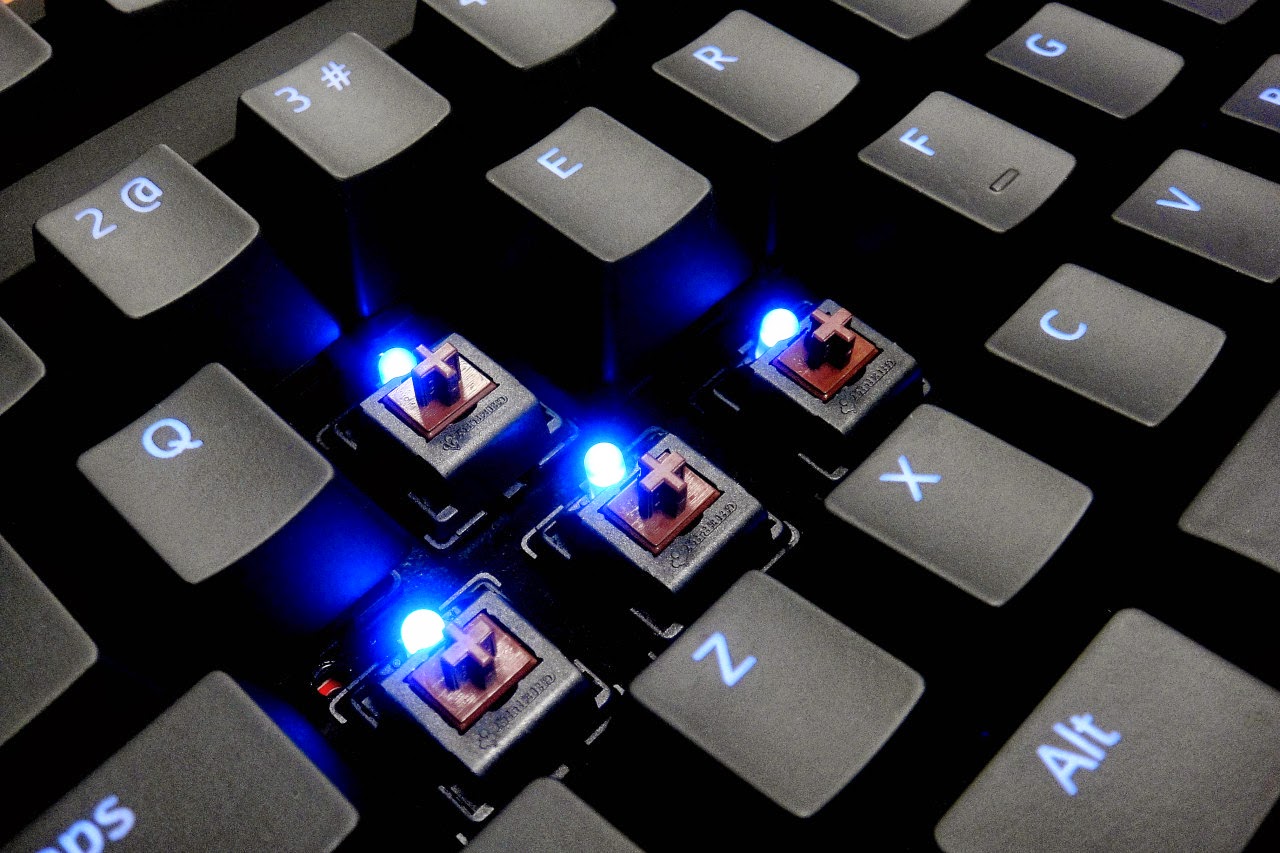 The Tesoro Durandal is a gaming keyboard, so the precision is helpful, but the ability to program macro keys (using an optional software that can be downloaded – but is very easy to use) is also quite important. I recently reviewed the Manticore keyboard by GX Gaming, and it did have more programmable features and bells and whistles, but in the end I felt that keyboard’s width and design, while good, were not as rock solid as the Durandal.

For me, the Durandal is just about the perfect keyboard. I do plenty of gaming on my computer, and this is more than suitable for that. However, I also do an inordinate amount of typing and the Tesoro Durandal Ultimate G1NL Mechanical Gaming Keyboard excelled on that front. It provided an accurate, comfortable experience for the hours I spend behind the keyboard at my PC, and it looked great while doing it.

This keyboard can be bought on the Tesoro website