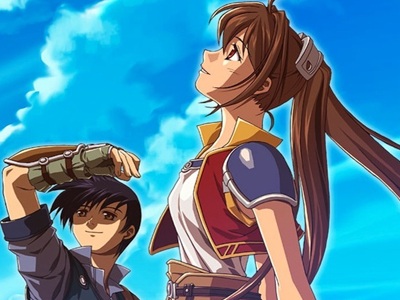 It’s a popular sentiment that games need to justify their price tag with either substantial content or considerable replayability. It’s a topic we’ve discussed at length in the past and a plight I can sympathise with – games aren’t free, after all. One of the many consequences of developers prioritising what consumers see as “value”, though, is that filler content is often crammed in for the sake of extending what would be better as a very brief, focused experience. I often find my interest in titles I would have eagerly completed suddenly waning two thirds in due to superfluities designed to elongate the game.
The Legend of Heroes: Trails in the Sky, though, has me reassessing just how far a lengthy JRPG can go without the brain tuning out at some point. And boy, does it ever “justify” its price tag.
Its freshness first became clear through the stellar battle system, which seems perfectly mundane on paper but truly works in practice. Skirmishes play out by navigating parties of characters around grids. There’s the standard range of weaponry to work with from swords and staves to magical attacks and special moves. Atop the typical micromanagement of equipment, there’s also a system vaguely reminiscent of Final Fantasy VII’s famous Materia system, whereby players will be able to customise their characters to an extent and create unique combinations that suit their personal play style. 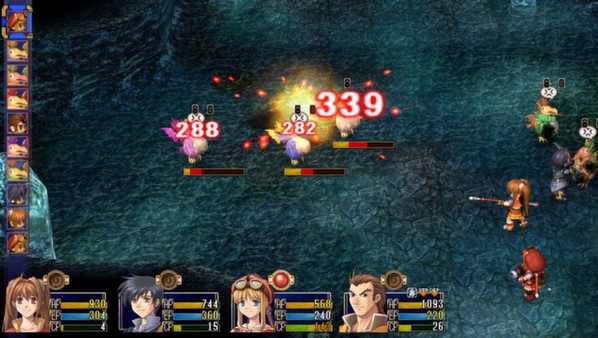 As much as Trails in the Sky shares its roots with classic JRPGs, though, it also offers plenty of deviations from those formulas which might be common place now, but were something of a revelation back in the day. One little reel on the left side of the screen changes everything by telegraphing the movement order of every combatant, player or computer controlled, on the screen. This reel also keeps track of incoming randomised stat upgrades, which again, apply to both friend and foe.
The resulting foresight adds new dimensions to intense scuffles. Do you select a physical attack because strength is going to be boosted in this specific turn or do you instead devote the turn to healing and squander the bonus, knowing the beast will recover as well, but keeping your party in better shape if something goes wrong somewhere? Do your fighters remain stationary to execute a boosted magic spell but risk an attack from the boss’s charged minion on the counter?
If you balked at the word “random”, rest assured that Trails in the Sky is not focused on luck. We all know that a heavy emphasis on luck can suck a lot of fun from a game, but here it’s an exciting mechanic that ensures battles remain engaging while still allowing players to be in control of their fate. The game of chance is never the overwhelming factor and, most importantly, the player actually has the power to adapt to turn the tide in their favour. The player’s mettle is tested fairly when the enemy snatches a valuable bonus as well. 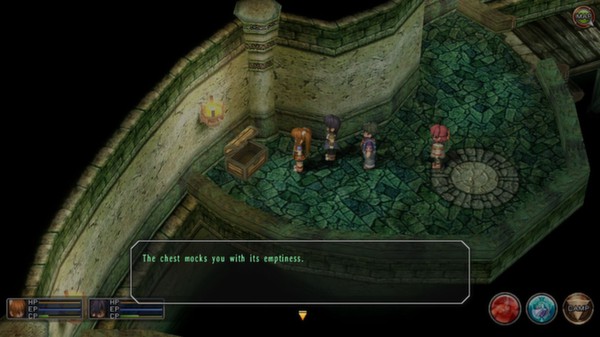 Other fairly common elements in the genre are enhanced by Trails in the Sky’s aforementioned reel. Since battles take place on grids, knockback plays a huge role in tight situations. As turns are based upon character speeds, the upcoming positions on the reel help players determine whether it’s worthwhile to coordinate consecutive hits with partners or spread out to keep the opposing forces from ganging up on one weak unit on their side. Killing an enemy means it forfeits its turn, too, so you can potentially prolong the player phase for an entire match with the right manoeuvres. The combat possibilities are so expansive that I’ve barely scraped the surface; the rest of this review could be dedicated to just gushing over them.
The brilliant mechanics would all be for naught if only the battle system of a JRPG was solid, of course. Thankfully, Trails in the Sky provides plenty of narrative context for wailing on amorphous blobs and colossal scorpions alike. The game’s central protagonists, Estelle and Joshua, are a charismatic pair that carry the game through its early chapters using the delightful banter inherent in their clashing personalities. The sprinklings of dry humour hidden elsewhere certainly don’t hurt either; XSEED didn’t hold back with this localisation.
As aspiring heroes, Joshua and Estelle wish to become senior bracers (a status held by the crème de la crème of those who aid civilians) and the player grows actively invested in this goal due to how fun the quests are. Events often move along at a leisurely pace, accentuated by music that flawlessly captures the tone of a whimsical adventure. As you complete the mandatory missions, new sidequests unlock at a manageable rate so as to give the player options but never leave them swamped.  What would feel like padding elsewhere comes across as a natural extension of Estelle and Joshua’s story. The actions the player performs under the guise of the in-game characters wholly represents their occupations. 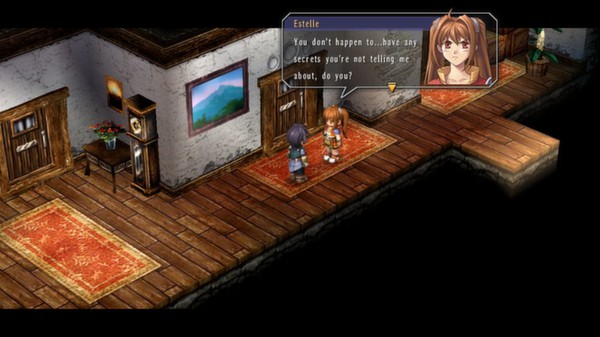 A trusty notebook obtained early on serves a dual purpose in chronicling every event to keep players on track whilst providing notes for those wishing to reminisce over assisted citizens. Some tasks are simple fetch quests, sure, but even those are enjoyable as there’s narrative justification and some plot to create the feeling that what you’re doing is consequential. NPCs often revise their dialogue to account for the player’s actions and ultimately keep the player enamoured.
If you do want to rush through to the end credits, the option is definitely available. I, however, found myself savouring every moment and pursuing every quest because of how pleasant and atmospheric Trails in the Sky remains throughout. The world of Liberl just oozes lore that is genuinely captivating, demanding players take their time to soak it all in. This game’s focus isn’t just run of the mill dungeon exploration; it’s all about exploring the grand world and chatting with the characters that reside within it. This new PC version only makes that easier by virtue of some nifty button shortcuts.
If the game falls flat in any regard (and that’s a big if), it’s due to the game’s reliance on missable quests and items. After all, no one wants to restart a twenty hour save file just because of one snazzy sword they never knew existed. The reasoning behind their existence is sound, given that you’re playing as just one of many adventurers fulfilling the duties of the citizenry and time passes between chapters, but completionists won’t appreciate having to bust out a walkthrough out of paranoia. If there’s a silver lining, though, it’s that the game gives you over a hundred save files to work so the devoted crowd can compile easily compile a self-made “scene select” of sorts. 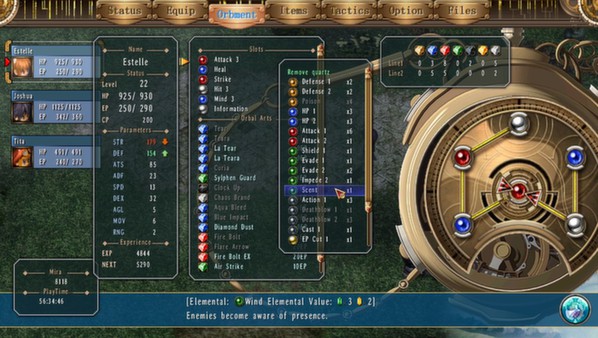 Even if you miss out on a tonne of optional quests, you’re guaranteed a game that’s as long as I originally alluded to. Seriously – an experimental player could well spend over 10 hours on just the prologue and over a hundred on the remainder. Despite my affinity for more succinct experiences, Trails in the Sky kept me on my toes thanks to how excellently it captures the spirit of an adventure. Throw in an excellent battle system and you can’t go wrong. This game absolutely benefits from being long.
The Legend of Heroes: Trails in the Sky isn’t just a wholly brilliant example of the genre done justice – it goes the extra mile in crafting a lengthy game that also maintains its initial entertainment value right through to its end. Steam is slowly nurturing a credible lineup of JRPGs, but this one easily gets my vote for finest yet.