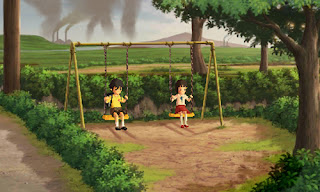 I’ve recently finished the main plot of Attack of the Friday Monsters on the Nintendo 3DS. That wasn’t much of a feat actually as the game only took two hours and thirty minutes. And yet after finishing it I couldn’t help but think that I would love for more games to be just like it.

There’s certain consequences that come as a result of a game having a bloated length; it becomes difficult to sustain the emotional connection that a player has to the characters and world when the game drags on and on. Any dull elements in a game become elements that encourage players to put the game down and never come back to it at about the 50-hour mark. For a perfect example, look at Ni No Kuni. I truly loved the game, but where the opening had me at the verge of tears, the last 20 or so hours of the game had me going through the motions. Enjoying myself for sure, but I couldn’t help but think “if Ni No Kuni was half as long, it would be twice as effective.”

Another great example is Persona 4. Another game I love with a passion, but at about the 70-hour mark, once I’d turned Rise into the love interest and maxed out all my numbers, I realised something when I was set with the task of going into the dungeon and rescuing the little sister; here’s a game that has just asked me to do something that should be extremely emotionally loaded, and here’s a game that I’ve connected with all the characters. This is a game where I have lost time playing, but I just don’t care any more. I’ve been through the dungeons, I’ve killed the monsters, I’ve rescued enough people. Just show me the end credits for the sake of closure.

The basic reality is that when a game’s length gets extended to a certain point, it’s difficult to maintain a player’s attention, let alone have the kind of dramatic highs and lows that mark out a good narrative. There’s a reason that there is resistance to three or four hour films, and the “sweet spot” for most films has been 90 minutes to two hours for years. Any longer than that and attentions start to waver. I would argue that length is a similar issue for games that want to maintain a player’s attention.

By contrast to Ni No Kuni and Persona 4, Attack of the Friday Monsters is an incredibly limited game. It’s barely interactive in that aside from a card game minigame all I needed to do was run from one clearly-market objective on the game’s map to the other.

And yet not once when I was playing it did I want it to end. It was never a grind, never a source of frustration. Just a textbook example of brilliant writing and a near-perfect recreation of something I’m have an emotional attachment to – in this case life in a Japanese small village. I was emotionally engaged from start to finish, and to me that makes Attack of The Friday Monsters the superior game. It meant more and it didn’t require more from me than I was willing to put into it.

I understand why game developers focus on the bloat at the moment. The majority of consumers out there have this funny idea that a game can be “expensive” when $60 buys 50 hours of gameplay, and so the nature of escalation means that game developers have pressure to extend the length of their games to 100 hours if not more in terms of raw play time.

But I don’t think that’s healthy for the industry. If a game runs to 100 hours, that’s 100 hours where the consumer is going to have no interest in any other game by any other developer. That means one developer profits, but at the extent of many others. If five developers were to produce five games of 20 hours content a piece, then the revenue would be better split, and if 20 developers were to produce 20 games of five hour length, then suddenly the games industry would enjoy a healthier range of experiences and the creative development of the industry would be quicker.

Independent developers do this already, of course. With limited resources most indie games only run for 10 or so hours at most, and as a consequence they tend to be cheaper to buy and play. But it’s not a coincidence that that is also where the innovation is and the truly artistic experiences are found. Part of the solution to the issues that AAA-game development faces at the moment, I feel, would be an understanding that by cutting the length and bloat of these games by 50 per cent or more, and dropping the price and production budget to match, then the developers would be able to branch out and be more creative, and ultimately the consumer will wind up with better quality products that don’t risk boring people for the sake of simply keeping them glued to the same game for weeks at a time.