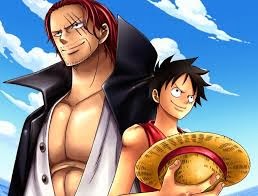 Ever played a game that you know is terrible, but you just can’t stop playing? It has unappealing presentation, dull or broken gameplay, and almost no depth or finesse, but it’s something that you just have to complete?
One Piece Romance Dawn is one of those games for me.
That in itself is really strange because I’m not the biggest fan of One Piece in the world. I vaguely know the characters (thanks to the One Piece Warriors game, because I haven’t watched the anime or read the manga), but it’s not like this is a Bleach game; where I’d rush out to buy one of those I’m not going to go out of my way to track down One Piece stuff.
So in theory it should take something pretty spectacular in a One Piece game to get my interest, but for some reason Romance Dawn pulled me in right from its rather dull eShop page. The idea of a manga-based JRPG is a pull, certainly (especially in the absence of anything interesting being done with Bleach at the moment), but I can’t put my finger on what it was that got me over the line to hit the “buy” button. 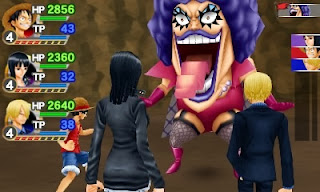 In some ways it actually worked out. Despite its many flaws, which I’ll get to shortly, Romance Dawn does do a reasonable job of explaining how pirate boy Luffy and his band of merry misfits ended up sailing the high seas together. In other words; this game saved me from reading the early manga or watching the early anime, and filled me in with the backstory that will make any One Piece games I play in the future more appealing.

It also saved me from getting too invested in following a narrative that is fun, but hardly groundbreaking. Yes, anime fans, I’m going there; I’m not a huge fan of One Piece. The characters are silly for the sake of being silly and there’s not really anyone (aside from, ironically, the most ridiculous-looking of them all, Chopper the reindeer) that I could form a bond to. Contrasted with something like Bleach, where I found nearly every character likable, and I know for a certainty now that I’m never going to feel inspired to really pick up on One Piece. 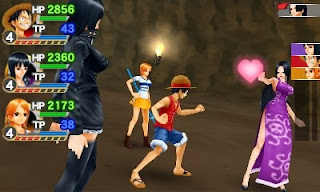 Taste in anime and manga is of course entirely subjective, so let’s get on to the flaws of Romance Dawn that are immediately apparent and will test the patience of even the most hardcore One Piece fan. The cutscenes might tell a story that I found useful and somewhat interesting, but they are extremely long and singularly dull. For the most part a cut scene is two little picture boxes with character profiles chatting to one another in unvoiced speech bubbles. This is broken up by the occasional moment of animation from what I assume is the anime, but those animations are brief indeed and when we’re talking about cut scenes that can literally last a half hour, it’s hard to justify Romance Dawn’s poor narrative pacing.

When the game finally cuts to gameplay, the experience doesn’t really improve. Players are dropped in environments that are entirely comprised of either curved paths, or straight paths. They’ll wander through these environments fighting the occasional band of enemies that pops up in front of them, and opening the occasional treasure chest. And that’s it. There’s nothing more to the game than progressing to the next cut scene. 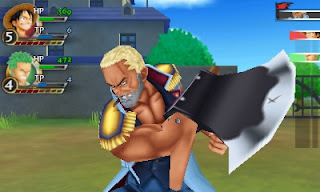 This would be tolerable if the combat was engaging, but unfortunately it’s not. In theory it could be interesting; players select from two different types of attacks (a light and a heavy one), and with each attack that connects they earn points, which can be used on a range of super attacks. Because this all plays out in a turn based fashion in theory it would be quite a strategic system, whereby players need to carefully consider which enemies to attack, whether to go for the kill or use the less risky light attacks that have a greater chance of connecting and building up the super meter, and so on, but unfortunately this is all let down by the game being ridiculously easy.

Case in point – enemies often drop loot when hit especially hard. Because of these drops I found myself constantly using powerful healing items on characters that had literally lost 17 hit points (out of thousands) because the game limited me to 10 of each healing item, and my inventory was maxed out. 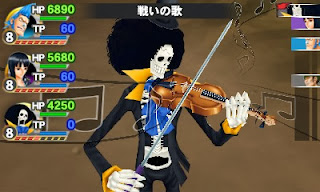 Because the game is so easy I flew through it doing the same button combinations over and over and over again. The occasional boss took longer to take down because they had a massive number of hit points, but with those fights I would simply adopt a rhythm of attacking and then using the healing ability and still wouldn’t break a sweat.

Aside from the main story games, if you find yourself in need to get more experience then you can head on over to complete some side quests (which play out the same way as the story levels) and grind up some more levels. I never needed them, but they’re there nonetheless.

And that’s about all there is to the game. There’s the standard item crafting feature that is in all JRPGs these days, and shops litter the world to get better equipment. But otherwise this is a game thin on content.

If I haven’t made this clear enough – this is a bad game. And yet, I couldn’t stop playing it. Perhaps because it’s so simple, it’s easy to tune out to while I’m playing it. Like a bit of pulp fiction (or, indeed, the typical manga), Romance Dawn is a “page turner” without being remotely memorable.

DDNet’s Games of the year 2013: PlayStation Vita Game of the Year