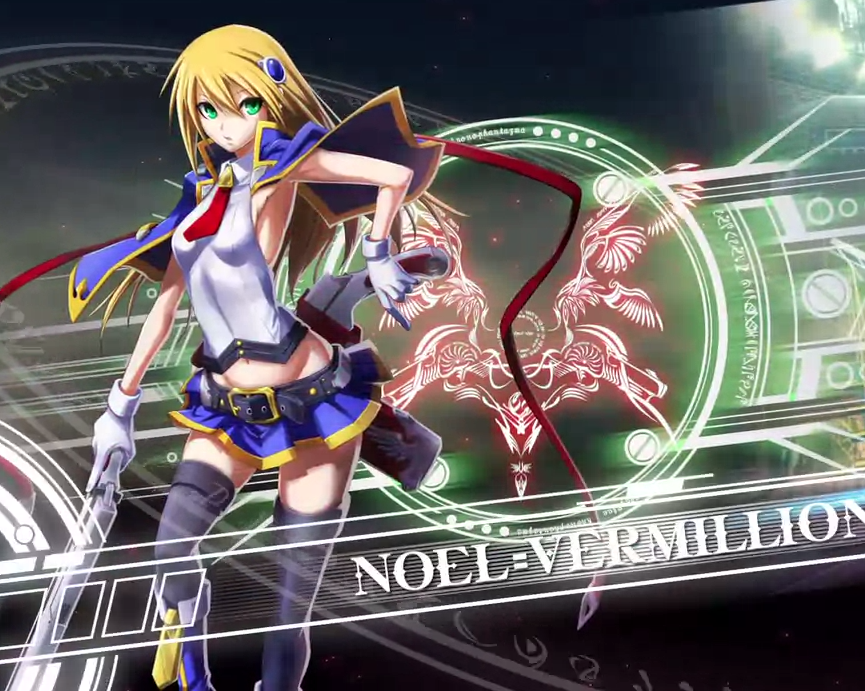 For a game that is really designed for the most committed of fighting game fans, BlazBlue is remarkably accessible for the casual button masher.

That’s not to say it’s an easy game. Oh no. This is a remarkably technical fighting game that requires practice and dedication to have a hope against any but the most basic AI. Going into a multiplayer bout and button mashing against a skilled player will always be embarrassing. BlazBlue is infamous for its sheer technical learning curve, and each of the games in the series have been oddly beautiful masterpieces in so completely executing on the technical side of things.

(The developers of this game also produced Persona 4 Arena. Click here for our review of that game)

BlazBlue on the PlayStation Vita was the first (and to date, only) fighting game where I spent significant time in the training mode to try and work out how to properly play my favourite character (Noel, not that anyone who knows me would be surprised by that choice). Not because I had any grand illusions that I would become some kind of fighting game savant and start entering myself into competitions and the like, but more because there was a grace and poetry to the speedy combat of BlazBlue, and I found that compelling. BlazBlue: Chrono Phantasma feels much the same, and I again found myself spending a bit of time in training to brush up on my Noel skills. 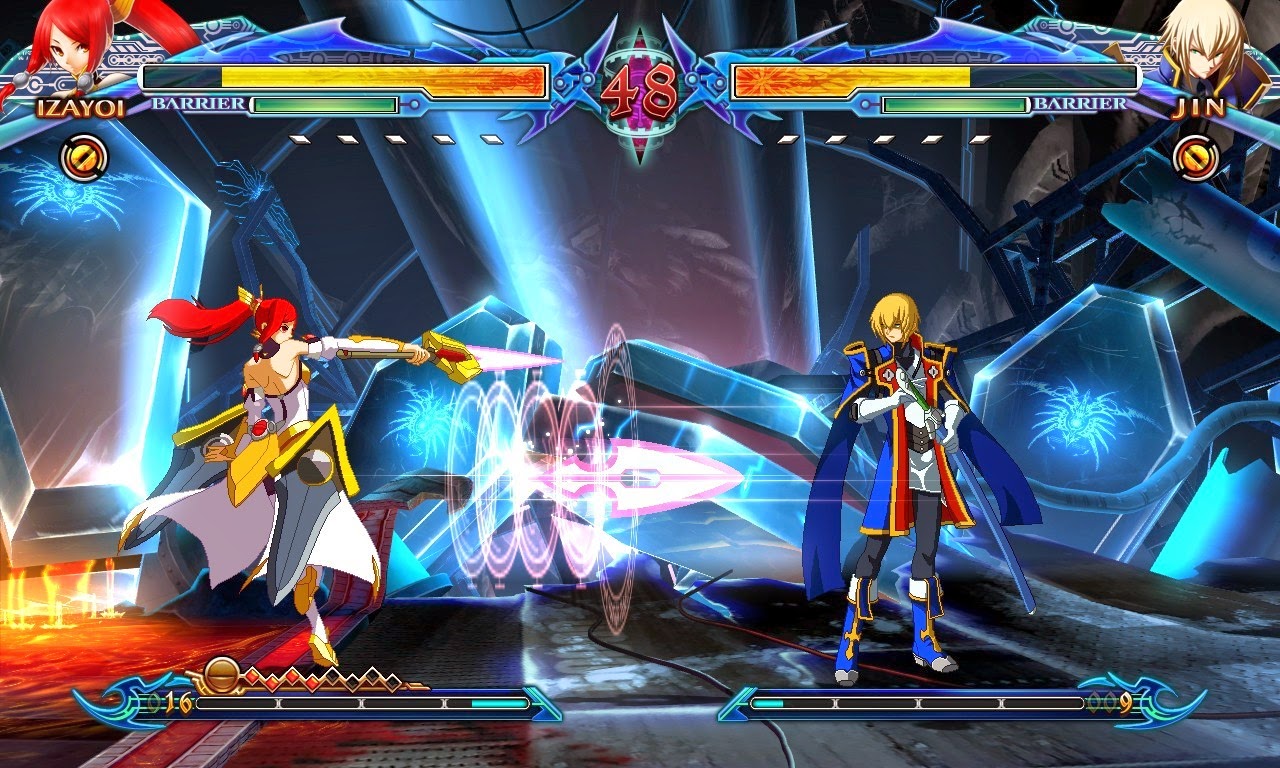 So with that out of the way, back to why BlazBlue is somehow accessible despite being a brutal ballet of a combat system. Somehow, and I really don’t know how given that this is a fighting game and so belongs to a genre not normally associated with quality narratives, the developers have nailed the narrative of this game. As with the previous BlazBlue games, if you’re not especially good at fighting games, you can simply turn the difficulty level right down to its least challenging, and still have a great time in playing through an extended and interesting anime-style story.

Picking up right where the previous game left off, BlazBlue: Chrono Phantasma includes a helpful guide to try and explain the plot to newcomers. It won’t all make sense and I don’t think the most committed BlazBlue fan can completely explain everything that goes on within the labyrinthine plot strands of this franchise, but thanks to that introduction almost everyone should be able to follow along at a general level, even if this is their first BlazBlue game.

Chrono Phantasma maintains the same thematic interests as previous games. Within the context of a gradually escalating conflict between science fiction forces of good and evil, there are some very Anime-style tropes that come to the front and centre. There’s a near-complete obsession with ranking every character in terms of power; a common line of dialogue is to the effect of “even this muscle-bound hulk wouldn’t have a chance against this really bad person, so what hope do you have?” And then, of course, you get to fight that bad person and prove the universe wrong. This is of course a theme that’s standard in every adventure manga and anime from Fists of the North Star right through to Bleach, One Piece and Dragon Ball, so fans of Japanese youth storytelling will get a kick out of it. 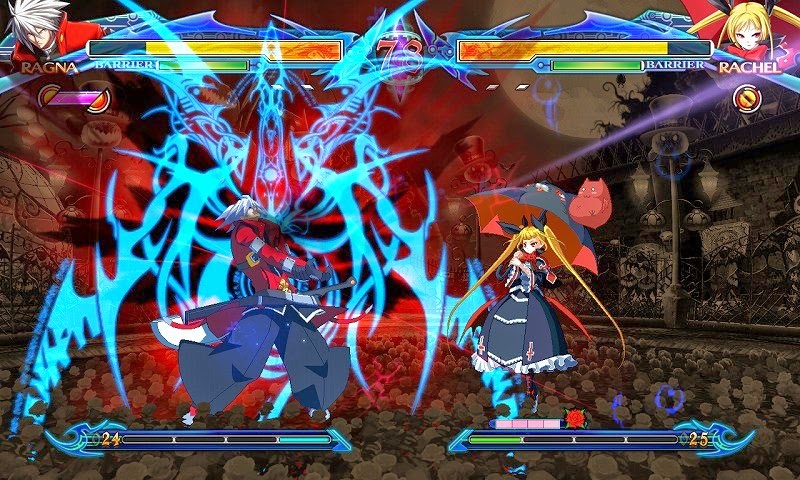 If this kind of narrative doesn’t stick for you then BlazBlue’s story mode in general is going to be more painful than pulling teeth. There are times where conversations can literally run for an hour without any player interaction whatsoever. When that dialogue is broken up by a 1-minute battle only to launch into another half hour of dialogue, the game’s story mode starts to take on a visual novel aspect which will disappoint folk that only come to beat up on digital characters. Still, the characters are all so distinct in design, and the style of the game is such that I can’t imagine anyone who isn’t an anime fan picking it up in the first place. And I can’t see anime fans not loving the beautiful character design, animation, and well-realised setting.

The personalities of the characters as told through the story replicate perfectly in the combat. For this reason, whoever is your favourite character through the narrative will become the one you practice most with in the combat, and with such a deep combat system mastering even one fighter is an impressive achievement. Those skills then move over nicely into the wealth of other gameplay options that BlazBlue throws at players, from the rock-solid netcode for robust online play, through to various clever takes on high score attack and survival mode that will keep you going after the default arcade mode. At times Chrono Phantasma can be overwhelming in just how much content is available, and that only serves to remind players that this is a game that demands dedication.

With a story mode that is as long as many JRPGs, the fact that the core fighting of BlazBlue: Chrono Phantasma is tweaked so slightly that a fighting game pleb like myself can’t notice fundamental differences to the previous game in the series is largely irrelevant. This is a meaty game, and for people that enjoy good anime plotlines and fun characters, it’s essential.