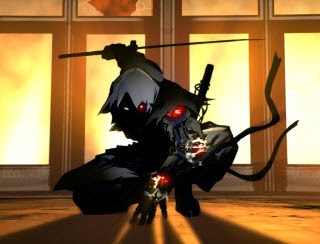 When you see the name Ninja Gaiden, certain expectations spring to mind. My own history with the series dates back to enjoying the simple side scrolling arcade brawler in very difficult NES titles. After the shift to 3D gameplay the series has instead been interested in bathing in blood while still being considerably difficult. Yaiba: Ninja Gaiden Z does retain the difficulty and gore, but trades in the realistic aesthetic for a cel shaded, comic book-style. All in all, it is a blast.

I get the impression that this is not a game that Ninja Gaiden purists will immediately latch onto. Gone is the stoic, serious series mainstay Ryu. Instead of controlling the famous ninja, players are given control of a true anti-hero in Yaiba – who is hell bent on finding and killing Ryu at all costs.

The game opens with Ryu and Yaiba duelling, and Ryu deals what should be a killing blow to Yaiba. Yaiba is saved by a shady company with plenty of money and access to a wide variety of state of the art technology. As a result, Yaiba’s arm, that was ruined in the fight, is replaced with a robotic one and his damaged eye is replaced with a cybernetic one. The abilities that these implants grant Yaiba reminded me of the God of War games. You have a longer ranged chain attack that is weaker but good at hitting and knocking back multiple enemies. You can use your claw for a series of very focused, highly damaging attacks. Of course, you also have a sword which is lightning quick and serves as your primary weapon that straddles the line between the other two forms of attack. Yaiba does not use magic the way Ryu and his other ninjas do, but instead is capable of killing boss and mid-boss type characters and ‘borrowing’ weapons ripped off of their bodies.

The combat style has a rapid, somewhat button mashing style to it. That does not make the game easy necessarily, because while almost no single enemy (except a handful of the later boss fights) is a major threat in and of itself, you are frequently surrounded by hordes of enemies. When they start to combine attacks (having yourself stunned with an electric attack and then set on fire is particularly nasty), then Yaiba’s health starts to disappear quickly. Life is replenished by using execution kills when enemies are on the verge of death. Given the abundance of enemies flocking Yaiba’s way, it’s not too difficult to get health back if the initial swarm attack doesn’t wipe Yaiba out. 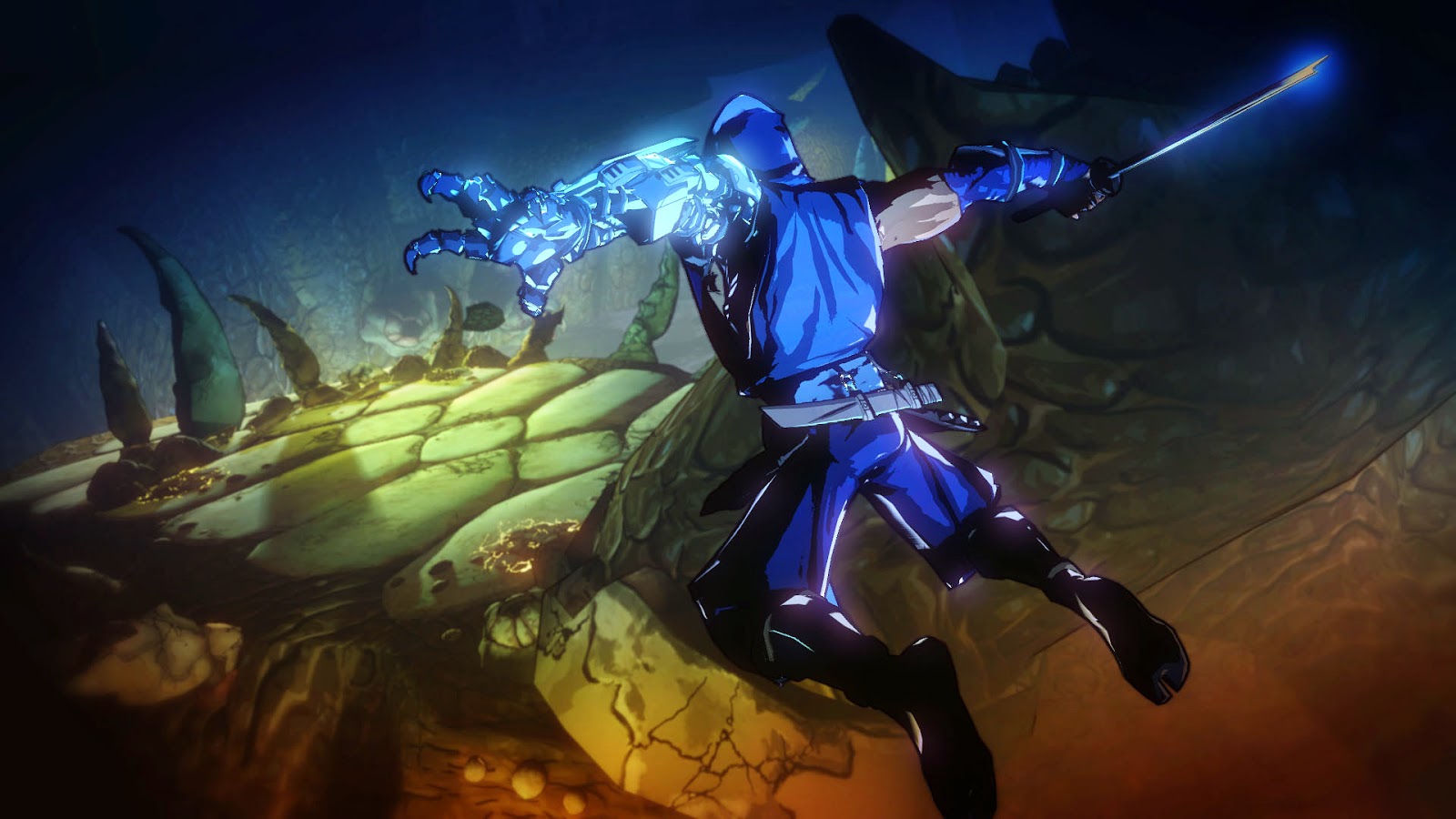 The differences between Yaiba and Ryu do not simply end at their fighting styles. Where as Ryu is a fairly stoic hero despite the copious violence he inflicts on his enemies, Yaiba is the exact opposite. He is constantly running his mouth, making lewd or obscene comments while revelling in the carnage around him. When presented with the option to go around a problem or break things, he unfailingly chooses the latter. He is not always an easy character to like, however, there is something to be said for his anti-hero attitude, and the fact that he winds up doing a lot of good despite his personal lack of morality. After all, you are battling hordes of zombies, so severing a few heads is basically a public service at that point, right?

It’s quite easy to compare Yaiba to other transgressive works like Goichi Suda’s Killer Is Dead. Both games feature ambiguous and generally unlikeable anti-heroes, both feature a cel shaded aesthetic, and both games have wound up panned by critics because by nature a transgressive work is going to straddle the line between entertainment and the kind of art that isn’t fun, but makes some kind of serious commentary that means it should be experienced nonetheless. Anyone going into the typical transgressive work expecting nothing but a good time is not going to enjoy the experience, and because people tend to go into games expecting a good time, we’re still a ways off games like these being fully appreciated by the majority.

Yaiba’s themes are buried a little deeper and are a little more simple than those in Killer Is Dead, it must be said. Where Suda loads up his games with religious imagery, surrealist themes and absurdist dialogue, Yaiba is more one-note; it’s post modernist in its extreme gore, and laughs along with the audience with how ridiculous the violence can get. It’s still compelling despite it’s relative simplicity, but it stands as evidence on just how difficult it is to master transgressive art in games, as Suda has done. 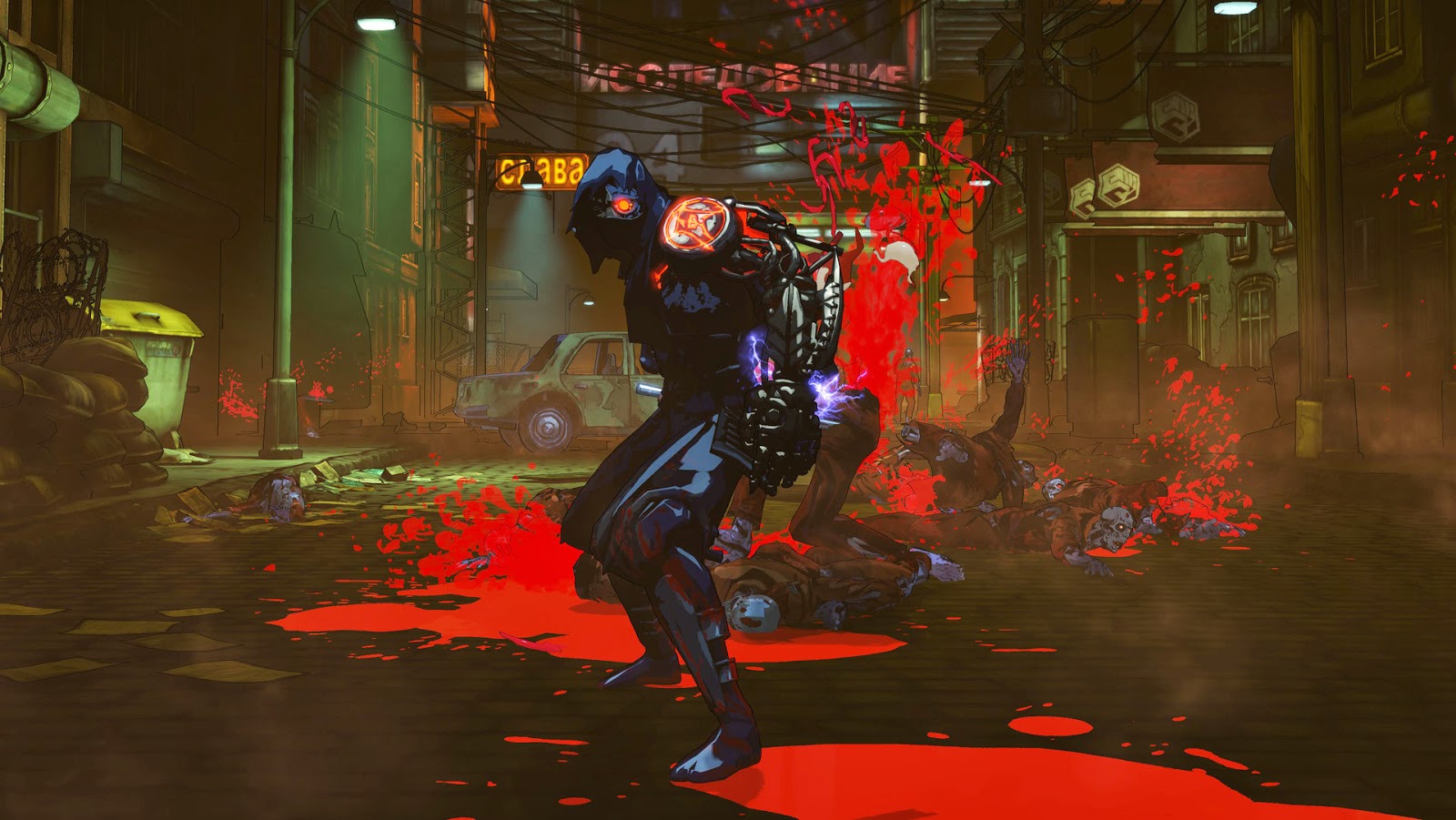 Yaiba may enjoy his bloodbath, but there are some light puzzle elements sprinkled in as well. Use certain types of zombies to charge energy stations or burning zombies to blow up walls and Yaiba can find some of these hidden items and continue along the main quest. One of the more interesting decisions is the lack of a jump button in favour of a dashing evasive move. There is plenty of platforming, where you dash button then becomes a jump or environmental interaction key, and some of these fast moving scenes can prove pretty challenging. They have a great sense of speed as you grapple from pipes, cling to perches and dash along walls while avoiding enemies and flames.

Some of these platforming segments were pretty frustrating, and the end boss – well, he was quite a challenge at first. More frustrating was that a loss to him will make players backtrack to the very beginning of a very tiring fight. For the most part Ninja Gaiden sprinkles in plenty of checkpoints along the way, but every now and then there’s a sequence of events that cannot be skipped and it is frustrating to be forced to play through those over and over again when with some fights trial and error is the only way to figure out how to claim victory.

An additional bonus for anyone who beats the game is a retro style arcade brawler featuring Yaiba. It is a lot less nuanced that the main game, but later levels can be brutally hard.

Yaiba: Ninja Gaiden Z is probably not going to appeal to everyone. The humour is often crass, the main character is one that a lot of people will struggle to get behind and the style has a more button mashing feel to it than fans of the series are used to. It is as though the team woke up one day and basically said that they wanted to do something different – very, very different. Personally I am just fine with that, because sometimes different is fun. Yaiba was probably an fun diversion for the team, but also one for me that I enjoyed the majority of my time with. It’s not the longest game, but it is a wild and entertaining ride while it lasts.