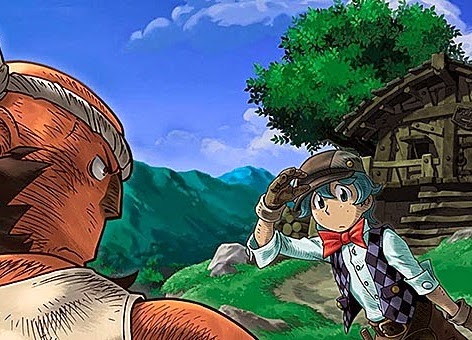 Making a comedy game is a challenge. It’s one thing to have jokes in there, but there also needs to be a compelling experience around it that people want to play through from start to finish.

After all, the running of a game is generally fairly long (compared to film and theatre, a game that lasts three hours long is long) and if it relies solely on its humour, it’s going to draw thin quickly. Weapon Shop de Omasse is, as a work of comedy, quite genius. Unfortunately it also falls squarely into the trap of being guilty of what it’s poking fun at.

The basic joke of Weapon Shop is that as exciting as the lives of heroes and adventurers are, the lives of the people that enable them must be deathly boring. As the heroes go on grand quests and slay legions of evil, the weaponsmiths and shop keepers toil away, making the equipment essential to the heroes survival, but with minimal excitement of their own to spice up their lives.

And so Weapon Shop casts players as one of the aforementioned weaponsmiths, who spends his life making equipment, passing it on to the heroes and polishing old equipment, while waiting for the next customer to come along. All along there’s a timer ticking along before a great evil invades the world. The protagonist gets no role in defeating this evil. He just sits there and watches as the others band together to fight the villain. 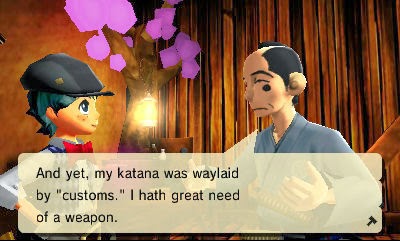 The characters are charming and amusing, and the comedy is generally solid. There’s a nice touch that during cut scenes a canned audience will also clap and laugh along, giving players the impression that they’re a part of an absurdist work of theatre in the vein of Samuel Beckett’s Waiting For Godot.

For those who haven’t either read or seen an performance of Waiting For Godot, the play follows the title pretty closely; to characters, Vladimir and Estragon, spend the entire play waiting for a third character, called Godot, to show up. By turns hilarious and quite tragic, Beckett’s play is considered one of the finest classics of theatre for numerous reasons, but not least for the thought-provoking existential questions that the play asks its audience. Weapon Shop is also existential, featuring a lead character that spends his entire time waiting on the actions of others. In Waiting For Godot, Estragon keeps asking Vladimir if they can “leave” only to receive the response that they’re “waiting for Godot,” so too does the protagonist of Weapon Shop keep dreaming of going out and being a hero, only to internally answer to himself “no, I need to make weapons for other heroes.”

In demonstrating just how mundane the lives are for characters outside of the main parties of heroes in an RPG, Weapon Shop de Omasse seeks to expose a weakness in the storytelling of the typical RPG; how can a game have a compelling sense of lore and environment when the entire narrative is centered on the heroes, and everything else that happens is dependent on what the heroes are doing. In other words, Weapon Shop, like Waiting for Godot, makes it painfully clear how dull life is in a narrative when you’re not actually the focus of it. 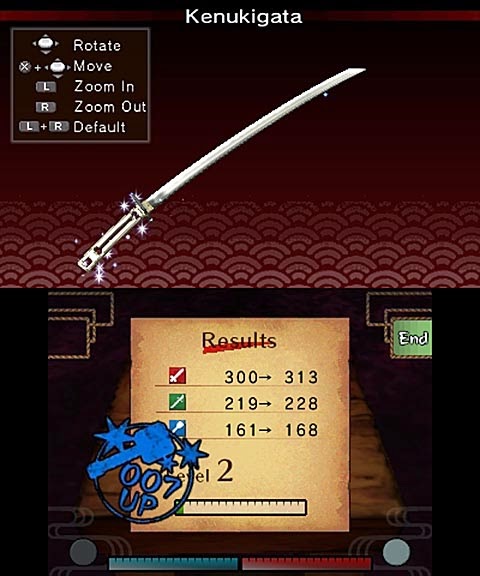 The danger that this theme is that existentialism is an incredibly difficult philosophy to engage with as a creator of film, theatre and literature, and only the most expert of writers is able to successfully achieve an existentialist work that is also interesting to watch or read. The issue that games writers face is that the medium is such a new media form that developers are only just starting to figure out how to throw deeper thinking into their games.

Weapon Shop de Omasse wasn’t written by Samuel Beckett, and it shows. While the pacing of the narrative is generally sound, there’s inconsistencies in the humour – where one scene will have me laughing so hard that I’m crying, other scenes will rely far too heavily on the inherent humour of cliche. Where almost anyone can kick back and enjoy a Beckett play (that’s no guarantee that they’ll understand it completely, but the plays work on multiple levels), Weapon Shop all but assumes that you’re a fan of JRPGs and have the sense of humour of a stereotypical “gamer.” The former works as a comedy for people who are not experts in the subject material, the latter does not.

Then there’s the simple fact that though the game’s theme is a sound one in the sense that a existential analysis of narrative is worth doing, in practice it means that you’re playing a game where you’re a character that makes weapons, polishes them, and listens to the exploits of the heroes that use them. As an interactive game, it’s fairly boring stuff. The developer has worked hard to do as much as possible with this formula by turning the weapon creation process into a rhythm minigame and giving each weapon a different set of attributes and customers having unique preferences, but it’s like taking a piece of broccoli and trying to turn it (and only it) into a gourmet meal. It’s simply not as effective as those philosophically-dense games (like Attack Of The Friday Monsters or Danganronpa) which are supported by something to make people want to continue playing the game. 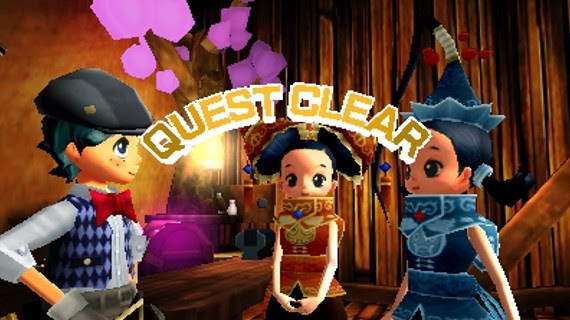 The one feature that I really dug was the Twitter-style stream that the main protagonist would listen into while he was working. While forging weapons or polishing them, a feed of short posts pops up on the top screen. Some of it is related to the quests that the heroes who have taken your weapons are on, allowing you keep track of what they’re up to. Other “tweets” are useless or silly comments designed that are thrown in for flavor. These had me chuckling, and because there are so many “tweets” it’s impossible to keep track of everything that’s going on while being productive at the same time. There’s a neat comment in there about the detrimental impact that social networks can have on an individual’s productivity, without actually benefiting their lives beyond idle curiosity, I think.

Weapon Shop de Omasse is a deeply intelligent game, and it’s certainly part of a fine heritage of philosophy that has made for compelling experiences in the past. But we can chalk this one up to the collective learning experience of the game development industry; it’s fine to feature philosophy and to shoot for comedy, but you simply can’t rely on that carrying the game. After all, if you’re not giving people a reason to keep playing, none of them are going to get through to the end of your game to understand the point that you’re making.