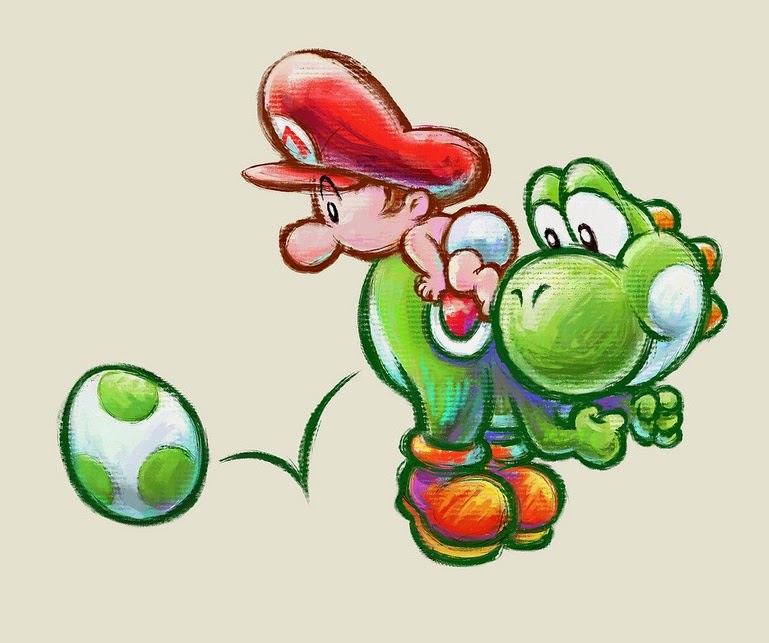 In case it was ever in question, Nintendo proved late last year with The Legend of Zelda: A Link Between Worlds that it still has the guns to meet (or surpass) its Super Nintendo glory days. Though borrowing much of its identity from its predecessor, that Zelda game forged its own path with various worthwhile formula changes that meant it did more than pay homage.

Now if only the company were willing to apply that same level of devotion to the admittedly less prolific Yoshi franchise instead of pawning it off to a third party developer.
While that third party developer, Arzest, was able to assemble an entertaining package with Yoshi’s New Island, it feels as though the studio spent too much time studying to reproduce Nintendo’s own efforts. The result falls short of both the masterful original and the DS Yoshi outing because it’s too constrained by what the developers felt they needed to do to remain accurate to Nintendo’s own work.
It’s clear from the outset that the team was aiming to replicate the original game’s successes rather than fashion a new experience. The same story, level structure, world map, collectables, and some sound effects from the first game have been left intact. Heck, even the game’s alleged “new” visual style looks like it was inspired by the opening scene of Yoshi’s Island. 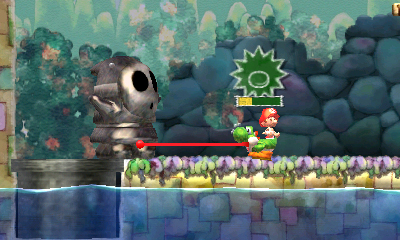 And it’s because of these borrowed elements that Yoshi’s New Island is still largely a success. Yoshi’s trademark egg tossing, fluttering, and consumption of foes provide the foundation for clever platforming and puzzles whilst preserving intuitive controls. With that said, as technically proficient as the game is, the lack of originality starts to bite quickly. Many of the ingenious concepts for puzzles are ripped straight out of Yoshi’s Island and are things that we’ve already seen, and though there are plenty of collectibles in each level, it seems like they are used to justify briefer, less ambitious stages.
Many of New Island’s new features are novelties that do little to enhance the formula. Yoshi’s sporadic use of gargantuan eggs to destroy scenery or explore watery passages is both finicky and gimmicky thanks to heavy level design limitations. The gyro-controlled vehicle segments are much the same and, while charming enough, would have been better served by using standard controls. 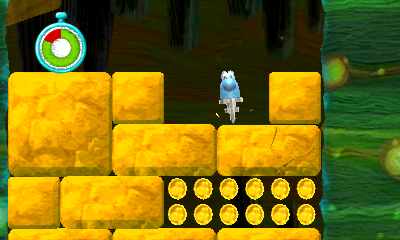 Even the designs for the regular levels can be cumbersome at times. Some of the staff from New Super Mario Bros. 2 assisted with the game’s development, and given at the surplus of needlessly hidden objects, it feels like these assistants were having a field day. The bosses, too, are fairly bland. And yet at other times I felt the game would take a brilliant concept and then severely underutilise it for what I assume is the sake of appealing to a younger audience.

The original Yoshi’s Island was a game that formed childhoods with its vibrant pastel visuals and unforgettable tunes, but I doubt New Island will have that same impact on the next generation of Yoshi lovers. The new graphics get more flak than they deserve from some other critics, but that ire is well deserved when it comes to the music, which isn’t great at the best of times, and is reused and remixed throughout the whole game. It’s a cute approach but one that was executed far better with previous Yoshi games. Here, the tunes are often so similar that they actually permeate and add a layer of repetition to the gameplay that accommodates them. 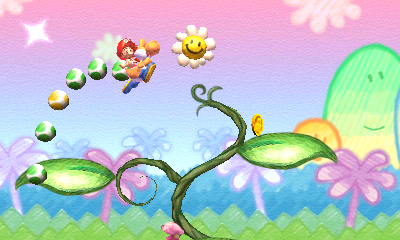 Yet despite being generally inferior to its forerunners, it’s a Yoshi’s Island game nonetheless. The mechanics and level designs, however stilted at times, are still wonderfully inventive compared to the rest of the 2D platformer genre. Likewise, the raw charm and cuteness exuded from a Yoshi game is never something to be undersold. One puzzle where Yoshi faces off against a doppelganger is symbolic of the whole situation; New Island’s greatest foe is itself.

In a world where no other Yoshi games existed, New Island might be hailed as a gem with faults that could be overlooked on the basis of its charm and ingenuity. When the original is so readily available however, it’s impossible not to make the comparison to the game that will cost a fraction of the price and deliver a superior overall experience. The new version has its merits but will merely be the 3DS’s flavour of the month for many.
Yoshi’s New Island has been accused of being a shameless nostalgia cash-in, but Arzest did well enough for Yoshi’s appeal to shine through. It just tries so painstakingly hard to replicate the original and then does an inferior job at it, which undermines the moments that are legitimately thrilling and fresh. Those who love cutesy platformers and are willing to cast cynicism aside will be well served, but just like the green dino himself, may find themselves with an insatiable appetite for something more sustaining by the game’s end.