It’s 9pm, you arrive home after a long day and walk into your bedroom. A faint breeze rustles your curtains. “Did I forget to close the window before I left?” you wonder. Before the answer comes to your mind though, you feel a presence behind you and hear a metallic clang on the floor. You turn around to see your room filling with grey smoke slowly obscuring the silhouette of a man in a gas mask before your eyes close involuntarily.

A terrifyingly evocative start to a game if there ever was one.

999: Nine Hours, Nine Persons, Nine Doors is a mystery/ horror visual novel from Chunsoft, best known as the developers of the Mystery Dungeon series of roguelikes, but also behind classic visual novels, such as Danganronpa. It first saw life as a DS adventure game which had Professor Layton-style puzzles integrated into its story. 999: The Novel removes these puzzles, although the entire story of the game is otherwise kept intact. 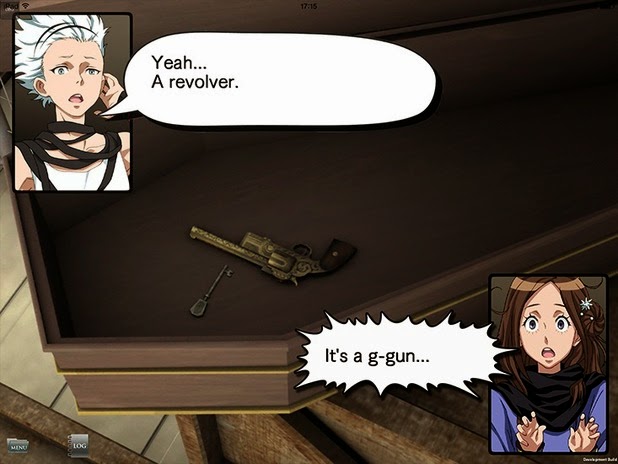 The premise is that nine people are kidnapped and placed on a sinking cruise liner. Each of them is given a tracking bracelet with a number and they must participate in a “Nonary Game”: a series of life or death challenges requiring wits, teamwork and cunning which rewards the winners with survival. You play as Junpei, participant number 5, who at first seems to know the least about the game. The other characters you meet all have bold designs and personalities, but seem to be hiding something underneath their visage. The game’s narrative made huge waves on its initial release and despite its story heavy nature, very little of it has been spoiled on the Internet and that’s just as well as I recommend newcomers run through spoiler-free for the first time for maximum effect. If you’re even slightly interested in mystery fiction and can stomach somewhat graphic violence, 999 already comes highly recommended.

Even now, the Internet is arguing over whether the iPad counts as a gaming device, so it’s only fitting that, since the iPad is an in between a console and a non-console, it would be a good home to titles which are in between game and non-game. We’ve seen gamebooks, board game adaptations and visual novels grace the platform and since there’s no expectation that these titles be “proper” games, it allows developers to get away with more than what would be acceptable on a dedicated gaming device.

The decision to remove the puzzles from this particular game is somewhat questionable, however. Normally, I would be all for removal of the interactive segments from a game like this – the main draw of a visual novel should be the story and puzzles often feel tacked on, ultimately detracting from the narrative. 999 is a different case however. Due to the premise, 999 is effectively a game within a game and each of the puzzles you had to solve in the DS version were exactly what Junpei was experiencing, and so their presence actually aided players in becoming invested in what is going on. 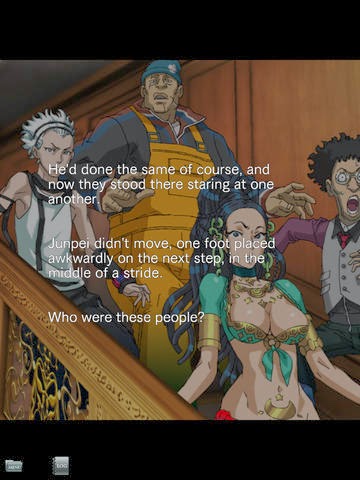 In the iOS port, these puzzles are removed and are instead conveyed through text. Sometimes you’ll get a brief description of how a puzzle works, and at other times you’ll inexplicably find keys in rooms with no effort needed. The difference is that before, by undertaking the puzzles, you were playing as Junpei. Now, you’re merely reading about Junpei. It seems like a subtle difference for the sake of better pacing but it sacrifices the sense of immersion that interactivity is able to provide.

The jump to iOS also had to leave behind the dual screen nature of the original title, sometimes for the better and others for the worse. The game’s background are now all redone in HD and look great on the iPad’s retina display. While the DS incarnation had upper body portraits of talking characters at all times however, the iOS version restricts character dialogue to speech bubbles and a smaller face portrait. The chatter that was present while you were solving puzzles in the DS version is also completely removed. This subsequently required the removal of dialogue trees, so the only choices you’ll ever get to make as Junpei are at key points of the story (and there are less than ten of them per playthrough). While much of this wasn’t necessary to understand the plot, it did provide extra characterisation which is sadly lost in this port. The iPad version also crashed on me occasionally. I became accustomed to crashing by the end, but nothing’s more infuriating than having your immersion broken right in the middle of a huge plot revelation.

It might sound like I’ve been overly negative to the iOS port for most of this review, but at the end of the day 999 is a fantastic game and this port is a solid way to experience it. Don’t be put off by the heavy amount of reading and lack of interactivity – honestly, I found this game with only text and images to be more thrilling than a high octane action title. If you haven’t been able to catch this game on its first release on DS and find the premise even slightly intriguing, you owe it to yourself to pick it up. It’s one of the most compelling stories to come from a videogame in years.