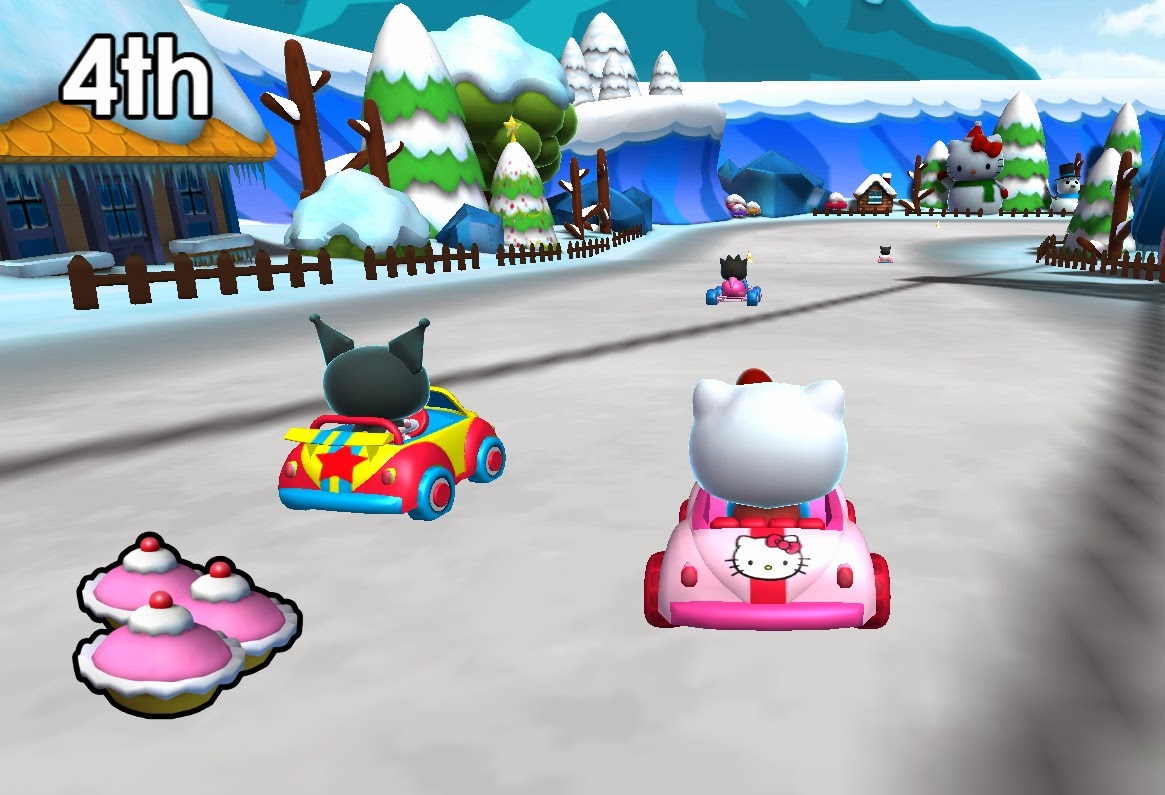 It’s disappointing when I buy a game only to find out it’s demanding more money from me. I have no problem with free-to-play games that lock content behind a pay wall. I don’t mind when a paid game has extra content that is an optional purchase.

I do mind when I’ve paid for a game, and standard content that would be found in a game of the genre is then locked behind a pay wall. This is that case with Hello Kitty Kruisers. For $1.99 Aus you get four characters and two championships of four tracks to race on. Additional characters, tracks, and a career mode all cost more money. A lot more money, in fact. And let’s be clear here – there’s no way to earn the “gold coins” that you need to unlock the other stuff by racing. You have to pay real money for it. For a game that’s aimed squarely at a younger generation, sticking $50 or so behind a pay wall is unacceptable.

(For alternative kart racers on the iPad, check out Garfield Kart or Sonic & Sega All-Stars Racing or its sequel)

I can just imagine how many kids are going to get excited by this. After all, the concept is sound if you’re a fan of Hello Kitty and the other adorable Sanrio characters, and character mash-up racing games are always good fun. And then they’re going to download it and find that they need to ask their parents for more money to get their favourite characters, or simply race on all the tracks. The disappointment that they’re going to experience should their parents then do the right thing and say “no” distresses me greatly, and is a borderline unethical play by the developer as the relative premium price on the App store suggests that the game offers a full experience for that initial $2. 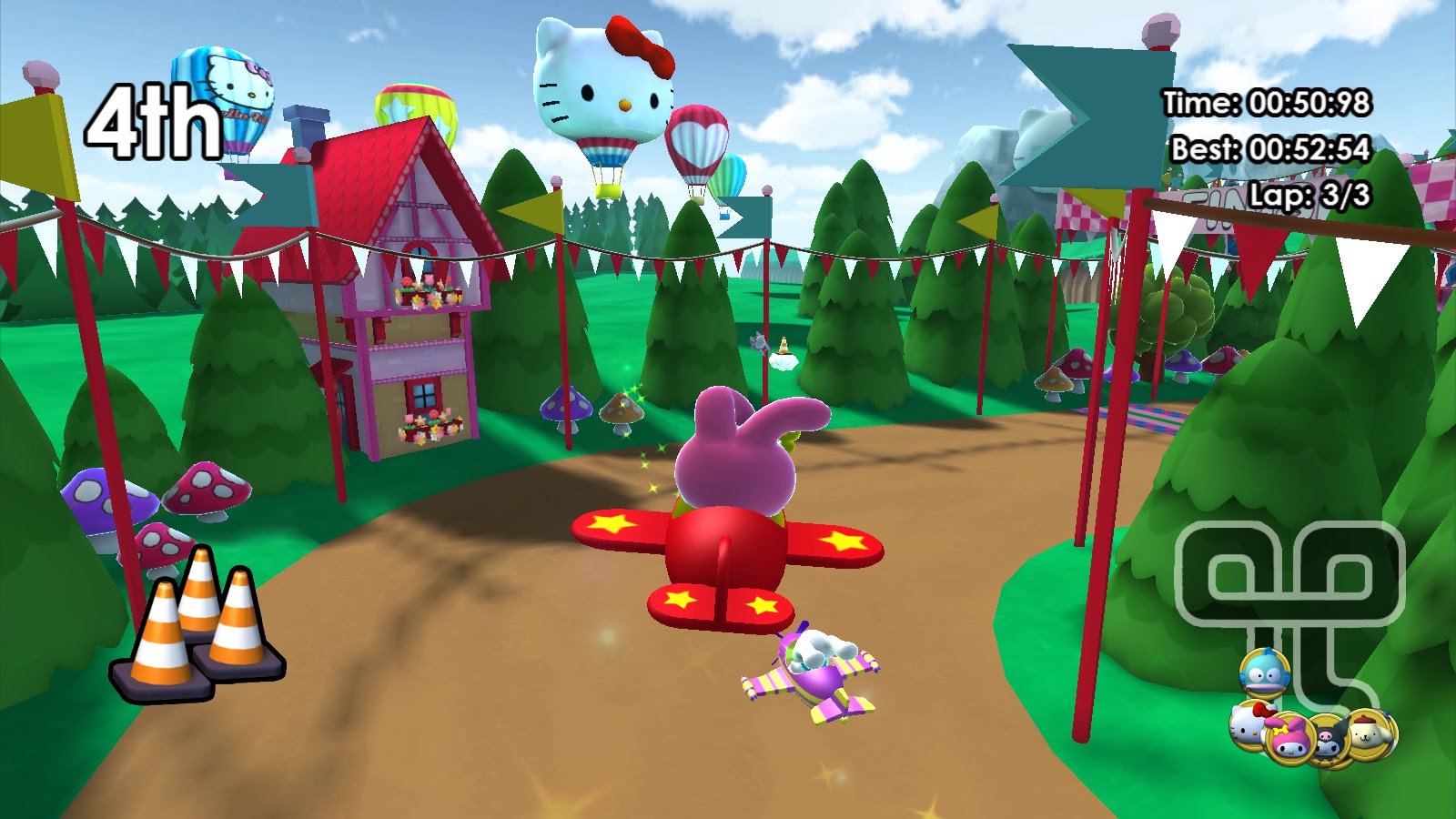 I would be willing to forgive the game to an extent if it then offered exceptional play for the money. While I can completely appreciate that Kruisers is for a younger generation, there are serious flaws in here, and I can’t really see them having much fun with this.

For a start, it’s a technical mess. My iPad isn’t the newest out there any more (it’s a 3rd generation), but it plays some pretty complex games without breaking a sweat. If my iPad can handle stuff like Real Racing 3 without issue, then the fact that Kruisers has crashed on multiple occasions and the frame rate really stutters at times is difficult to understand. The art aesthetic itself is quite charming, as you’d expect for a Kitty game, but it’s difficult to appreciate when its stuttering about.

The racing itself is simple, as you’d hope for a game that children need to be able to play. Track design is very basic, there’s no powerslides, and the items are all very standard for a kart racer. This all works in the favour of the game, which is meant to be a lighthearted and basic kart racer. But then the plane sections happen. Yep, just like the recent Sonic kart racer there are plane and boat sections to go with the road action, but the plane sections in this Kitty game are truly unbearable, with shocking physics and unresponsive controls. The road cars work fine, and the boat steering is clunky but manageable, but the plane sections would be unplayable if the turns and tracks weren’t so basic. 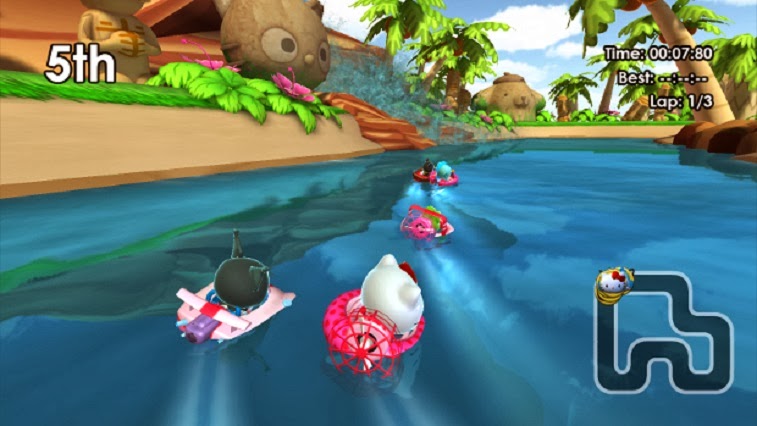 As a bit of an embarrassing admission, I quite like the Kitty range of characters. They’re very Japanese and quite charming. There was plenty of potential there to make a decent racing game from these characters, but a lust for mandatory microtransactions as well as some poor technical implementation has left us with a very poor game indeed that feels every bit the shameless cash in.

I genuinely wanted to enjoy this game, and apparently there’s a console version of it on the way. While I won’t expect it to be a Mario Kart killer, I do still have hope that those console versions of the game, at least, fix the technical flaws and are free of hostile microtransactions. If they can do that then I’d have no problem recommending this to Kitty and My Melody fans.

Want to read the thoughts of the finest art game developers? Be sure to back our Kickstarter!