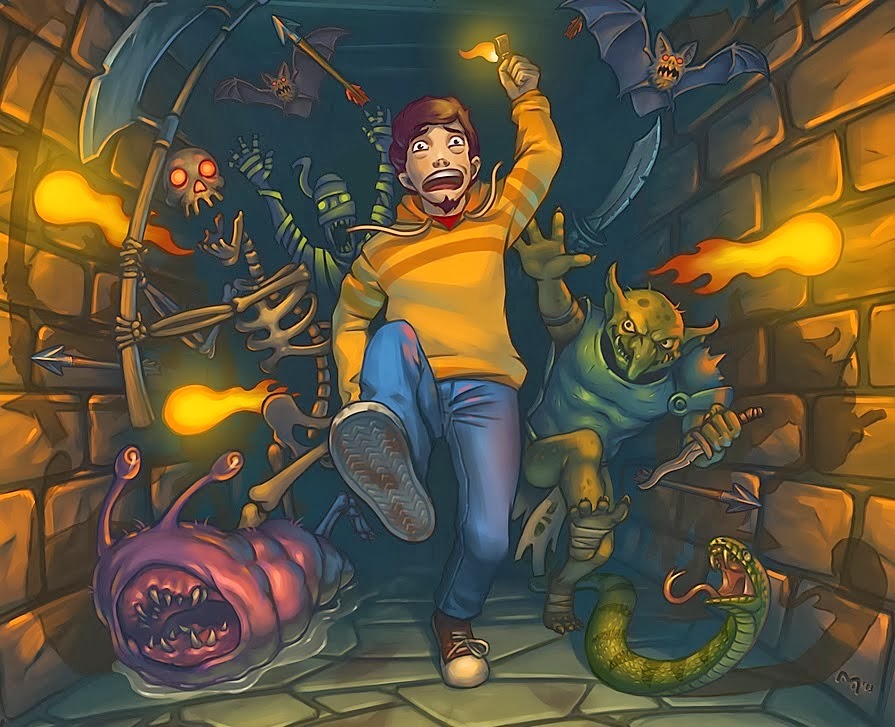 I swear the game starts off just like my typical Thursday nights. The hero of Unepic is sitting around a table with some friends playing a pen-and-paper game like Dungeons & Dragons. Banter. Check. Snarky remarks. Check. This is looking good! Then something strange happens. The hero has to pee.

He heads off to the toilet (no this is not a quest) and is somehow sucked into a real-life version of the game he was just playing. The game pops up a brief message of how to access the hero’s inventory and from there it’s time to get adventuring. right then and there in decided that the gamepad was a better choice than the Pro controller.

Fans of old school NES and SNES games like Castlevania and Ghosts ‘n Goblins are going to feel right at home with this game, as they’re a near-perfect throwback to that era of play. But then the game plays quite modern, which is a balancing act that many games try to achieve but ultimately fail. Here the developers have nailed it. 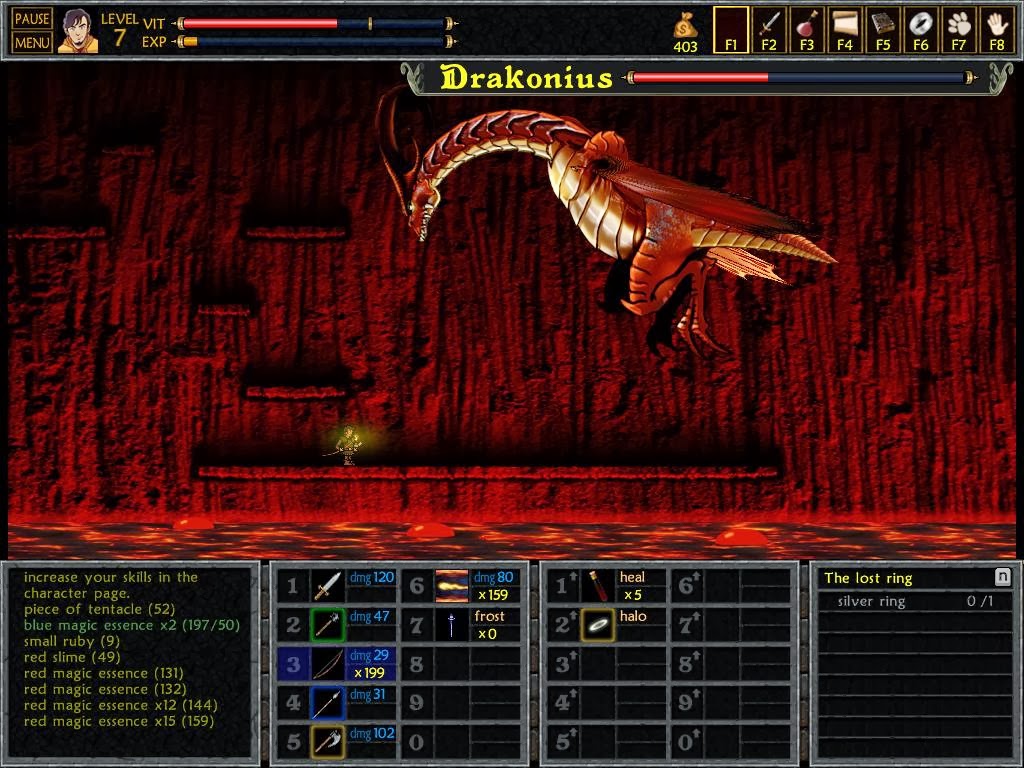 In Unepic the majority of your time will be spent exploring. By default you’re carrying around a Zippo lighter, which offers a little bit of light, but in every room there are torches/ braziers / long candle holders that, when lit, offer far better lighting than what your zippo can produce. Furthermore, the extra light will reveal a steady stream of secrets that have been hidden in the dark prior. This lighting system is a neat concept that adds quite a bit to the game; it definitely offers an intrepid explorer the suspense of wondering what lies in wait there in the dark.

Another modern touch is that there’s a neat manner of fast travel integrated into the adventure. You’ll find these gates here and there as you explore, and when you do make sure you open them. They lead to a hub of sorts that will allow you to walk through any other open door that is available to instantly travel to that part of the dungeon.

Gameplay wise Unepic doesn’t hold your hand but it doesn’t throw you to your death either like some other “hard” games feel keen to do at times (See Demon’s/ Dark Souls). The game manages to dish out the appropriate amount of information to tell you when it becomes relevant. Combat feels polished regardless of whether the character is involved in melee or ranged combat. There’s some good variety to it too, with not every weapon being designed for every creature. You won’t be able to blindly run into every room. 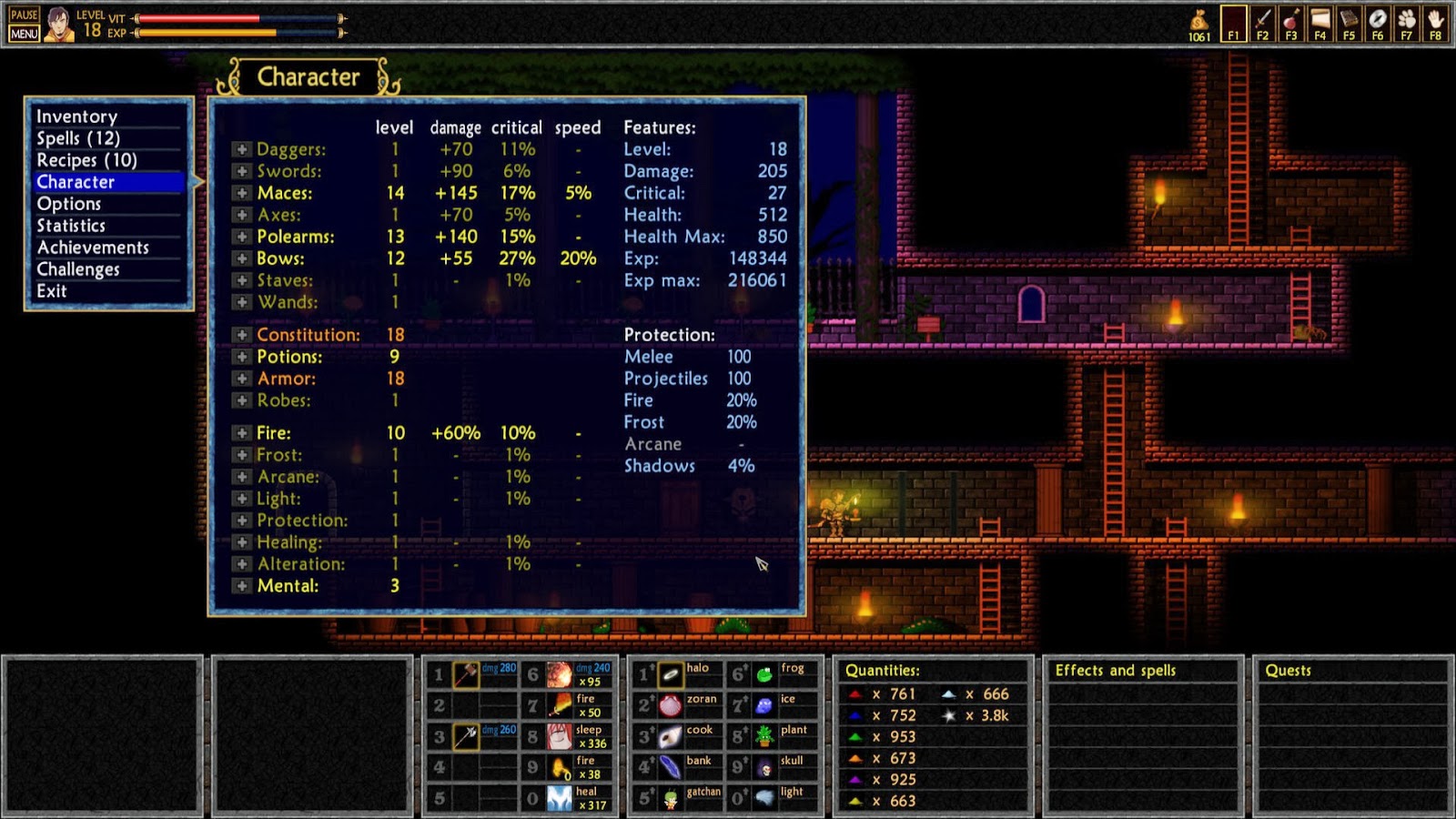 The only real place where the game feels uncomfortable is with the jumping mechanics, which at first seem a little lacking but with practice it fits with the overall tone and style of the game. Actually the jumping made me think back to another retro classic; Teenage Mutant Ninja Turtles on the NES. It takes a bit of getting used to but once you learn the timing and the distances it’s hardly noticeable.

Leveling up grants you the ability to place points into each of the different weapon types that you can wield as well as statistics such as Constitution/ Potions/ Armour/ and Robes. These stat points increase the effectiveness and then speeds of their respective types. The system is rather straight forward and easy to understand. Each point into an ability tells you what bonuses it is granting you which is nice. As you get further into the game, there are quests that allow you to learn new magic types, such as Fire, Ice, Healing, and so on. These unlock more skills in your character sheet. Levelling up these skills grants you the ability to craft higher level potions and cast higher level spells. So for a game that looks so simple, there’s a surprising amount of depth to it.

Unepic is a solid game that holds up very well throughout. It offers up a stiff challenge, while maintaining a sound sense of humour, and will go down especially well with those of us that remember (or still play) all-night Dungeons & Dragons sessions.