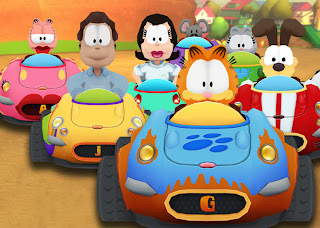 Ever since the original Super Mario Kart, it’s been far to easy to throw a collection of loved characters together in a package where they race around tracks in karts throwing random weapons at one another.

Typically these games have been less than successful because a good racing game isn’t that easy to produce. It needs balanced physics, well-designed tracks and thorough play testing in order to make sure that everyone’s favourite character has half a chance of winning.

Against all odds Garfield Kart isn’t that bad. In fact, it’s quite enjoyable.

If you’ve ever played a kart racing game before, then Garfield Kart will be very familiar indeed. The game is broken up into a series of “cups,” each with three difficulty levels (50cc, 100cc and 150cc), and each of those cups are made up of a few tracks. The more difficult cups have the more challenging track design, naturally. 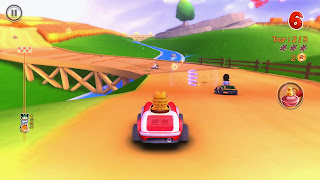 In addition to the cups, there’s a time trial mode and online racing, though I could never get an online match to work, so I stuck exclusively to the single player mode. So far, so standard, but what I immediately appreciated about Garfield Kart’s design was that there were so many hidden secrets strewn throughout the tracks. From three hidden puzzle pieces that are often really well hidden, to multiple paths through some tracks and then the odd tantalising pickup that seems to be completely out of reach, Garfield Kart wants to encourage players to explore, and this adds a lot of value to an otherwise thin package when compared to the big guns of the genre, namely Mario Kart and Sonic & Sega All-Stars Racing.

Equally critical to offering a good range of interesting tracks, and character kart racing game needs a lot of personality in its racing. Gardfield fans will love what’s on offer here. All the major characters from the comic are available here, and it’s possible to customise their cars and costumes for a range of different beneficial effects – so for instance getting you on your feet quicker when hit by a specific kind of weapon. 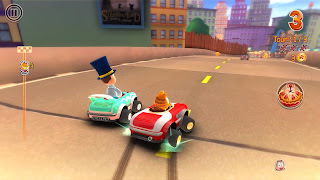 The weapons are a fun bunch that will also be instantly recognisable to Garfield fans. Pies are thrown as projectiles, lasagnas are eaten for a speed boost, and UFOs are summoned to slow down the race’s leader. As with most kart racers, it’s pretty frustrating to be a front runner because a rubber banding AI will pound you into the dirt with all kinds of weapons, but as with most good kart racers the charm outweighs the frustration.

Given that this is an iPad game, there’s going to be the inevitable fear that the lack of buttons compromises the gameplay quality for some, but that’s not really the case here. There’s gyro controls for those that can handle those, and they work OK, but personally I enjoyed the virtual buttons, which is filtered down to just five – turn left, turn right, brake, powerslide and fire weapon. The game handles acceleration naturally. 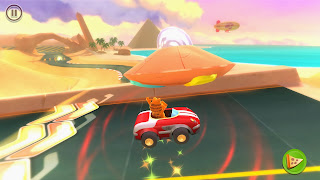 The powerslide is a little sluggish at first, but after a short while’s play I was comfortable with the turning arcs, and found myself zipping around the tracks like an old hat. As with many kart racers, powersliding for a while yields a temporary speed boost, and it’s important to make excessive use of that in order to stay ahead, especially on the highest difficulty settings.

What is disappointing is the way the game has worked some in-app purchasing into the formula. Most items need to be unlocked by spending “coins.” These can be earned from grinding away at the tracks, but they come far too slowly there to unlock everything in a reasonable time frame. The answer? To buy some coins using real money, of course.

Now, Garfield Kart costs $0.99, a price that I consider to be entirely too low for what’s on offer in the game. It’s easily a low budget but greatly enjoyable kart racing. But I would have much rather the game be honest about how much it wants from players. Either way, I wholeheartedly recommend this game to fans of the ginger cat and his antics, but that pricing strategy does leave the only real sour note I can think of with the whole experience.