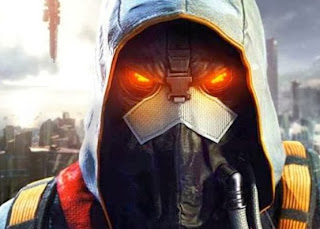 Killzone released with serious expectations behind it. After all, along with Knack, it was one of the two retail exclusives the PlayStation 4 had to launch with, and while Knack was at times entertaining, it also fell flat as a ‘next gen’ experience. This puts even more pressure on Killzone to deliver both critically and commercially (though Knack did outsell Super Mario 3D World, so perhaps it’ll be considered a commercial success).

The good news is, Killzone does a far better job of representing Sony’s launch aspirations than Knack did. Unfortunately it is not quite the killer experience everyone was likely hoping for either. It hurts that Shadow Fall will be compared to Call of Duty: Ghosts and Battlefield 4, since all three of these are blockbuster first person shooters that were released at the same time.

I have only sparingly played the prior Killzone games. I have the HD collection on PlayStation 3, but have only hopped into a handful of online matches here and there and played a little of the single player content. None of the three games really grabbed me in my time with them, and compared to my experience with them, Shadow Fall at least feels more like the more polished game, and the developers deserve some credit for trying to do some different things with the game while making good use of the PlayStation 4 hardware.

The visuals are absolutely stunning. Whereas Knack looked colourful and vibrant, the world seldom felt alive or like an excellent representation of what the PlayStation 4’s graphics could deliver. Killzone has excellent detail, a great deal of movement and several scenes that are simply amazing to take in. One scene in particular; a free fall set piece through a crumbling, collapsing cityscape, was hard for me to appreciate as I played it myself thanks to all the action going on around me, but I was thoroughly impressed with when I got to sit back and watch my son play it.

While the audio works on several levels – good music, decent voice acting and sound effects that are not only varied but helpful (such as soldiers nearby talking to give you an idea that they might be about), the real surprise was the speaker in the controller. You can pick up audio logs throughout your journey that play through the controller. The first time that happened it was a bit of a surprise, but the quality was both clear and quite loud. This was probably the best example of how the sound through this second speaker this side of Resogun. 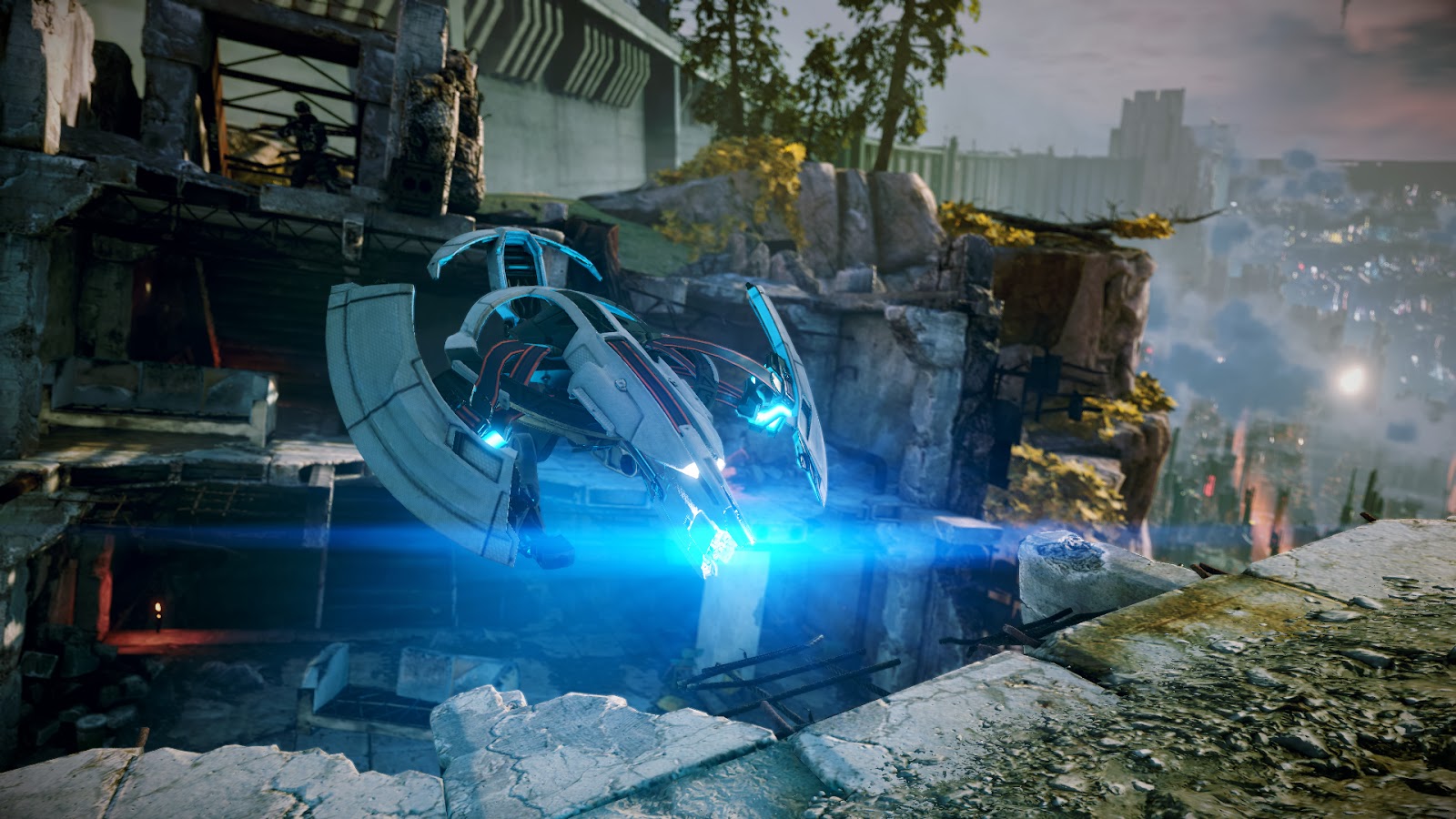 The touch pad is only used for swapping commands for your remote, robotic, Owl unit. Nothing terribly innovative here since you swipe up, down, left or right to have it do one of four tasks. This functionality could have been replaced with a simple button press to toggle/cycle through settings, but it works fine so I have no real complaints on that front. The coloured light bar was also turned to an interesting use as it smoothly shifts colours as you take damage. It is a neat effect though I seldom actually saw it at work because that part of the controller is pointed away from me and at the television.

While visually the game is polished, the gameplay itself can be a bit rough around the edges. Earlier I gave the development team some props for trying to mix up the formula a bit. That being said, at times I felt the execution was lacking. There are a handful of these free fall sections, like the one I mentioned above, where any contact with the environment means instant death. I found that segment frustrating, and looking around in the Internet, I found quite a few others who expressed the same sentiment.

Level design is also confusing at times. Most of the time the game’s objective markers do a decent job of pointing you in the right direction, but because levels have a large amount of vertical travel to them as you explore, those markers struggle to adequately represent that axis well. The story itself is also underwhelming, with a main character that just never really resonated with me. He is the typical yes-man sort with a clichéd background that I did not care about in the least. The very last level tries to make use of some stealth mechanics, but they feel a bit undercooked with frequent frustration. Once you know exactly what to do and where to go, you can cruise through that level in three or four minutes with ease, but I spent an hour and change on it though due to what I felt were cheap deaths.

There are some interesting ideas here, such as the Owl which can be used to stun, attack, shield or help you zip line around stages and enemies, but more often than not the big attempts at straying from the formula feel like missed opportunities. One of the chapters takes you to an abandoned ship that feels ripe for a scary sort of Dead Space-like level, but instead you spend about half of your time trying to navigate a puzzle where you simply move power cores around to unlock a series of doors before engaging in a large fire fight. Again, it just felt like a missed opportunity in a single player mode that was solid, but far from spectacular. 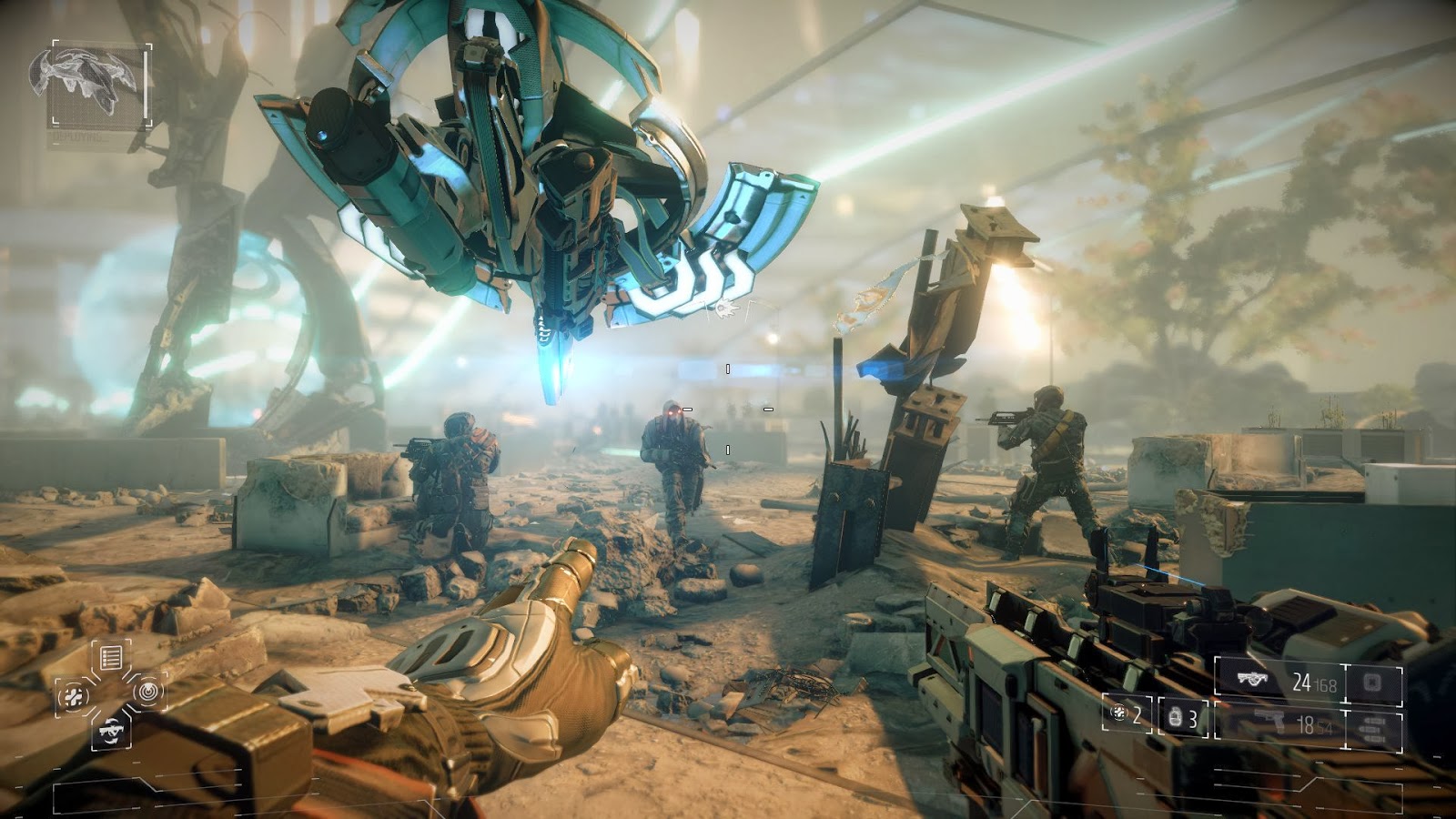 With games like this however, you are often going to simply plug yourself into the multiplayer. Killzone’s multiplayer was solid, but not my favourite from the genre. The levels look pretty, and connectivity seems solid. I never had matches drop out on me, and you do build up statistics and gain the opportunity to customise some loadouts so you can tweak your class to match your preferred style of play (I like ranged/ sniper classes in almost all of my FPS games, and they’re often underdone, so it was good to see they worked here). The modes are standard, with Team Deathmatch being the default. It’s a fun enough experience, but with so much immediate competition such as Call of Duty or Battlefield, it fails to distinguish itself as anything special at this point.

Guerrilla Games had time to work with the hardware, and it showed in the visuals and the use of the controller. It ticks off all the boxes you look for in a shooter while doing a nice job of showing off what the PlayStation 4 can do. Killzone Shadow Fall basically meets expectations without doing much to exceed them.