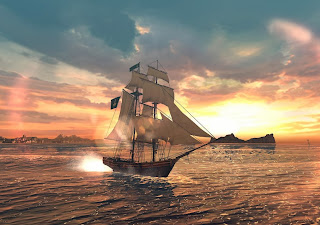 I’m not sure why, but the big publishers seem to struggle with coming up with compelling ways to bring their important franchises to the iPad. EA has both hits and misses in equal measure, and Activision has only made token efforts with its Call of Duty franchise.

On the other end of the spectrum is 2K Games, which is more interested in releasing premium-priced and full featured itirations of its games. Good on the producers over at 2K for that decision; it’s good to see some publishers understand that there are genuine fans of gaming with iPads. Somewhere in the middle sits Ubisoft. It doesn’t exactly produce AAA-games on the iPad, but what it does do is take its popular franchises and produce “mobile” titles that far exceed the normal quality of such things. Exhibit A – Rayman Jungle Run and its sequel. Not a “full” Rayman game, but a darned fine runner with all the Rayman charm packed into a small download.

Exhibit B – Assassin’s Creed Pirates. This is no Assassin’s Creed 4: Black Flag, but as a mobile experience, it’s pretty slick. Pirates is best described as a minigame compilation. There aren’t that many different minigames in effect, but the game itself works like something in the genre; one moment you’ll be tracing a line on the screen to direct your ship through an obstacle course of enemy ships (an easy approximation of a stealth mechanic), the next you’ll be engaging in ship-to-ship combat. Don’t expect anything as complex as the ship combat in Black Flag though. Here you’ll tap either left or right on the screen to dodge the enemy shots as they come at you, and then aim up a retaliatory shot. Repeat until one boat sinks. 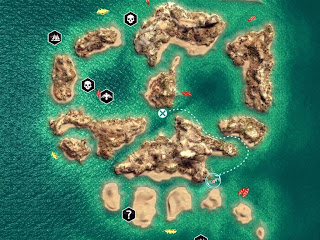 There’s also some basic management features such as hiring new crew. As with many mobile games there’s a levelling system at work here where the really good stuff is locked away until you’ve done some level grinding, but because there’s a reasonable up-front price for the game the developers clearly didn’t feel the need to be aggressive with how much work is involved here.

Aside from those minigames (some are timed to add in an extra tension), there isn’t that much more to do in Pirates, and this is my only real problem with the game. It looks good, and makes effective use of the music that was so memorable in Black Flag, but in the most critical area Pirates falters – it lacks context. The wafer-thin plot is told through static cut scenes of paper cut-outs chatting with one another. There’s no perfect example than the opening scene of the game – a pirate attacks a ship, where the hero is imprisoned. The hero is rescued, and then three lines of dialogue later the pirate captain has given him his own ship.

Yes, the narrative runs at that pace. Throw in the lack of historical authenticity that I found so appealing in both Assassin’s Creed 3 and 4, and Pirates is missing a vital component for what made those games so compelling for me.

What’s left is good fun, but goofy fun, and clean presentation aside it doesn’t really do the franchise justice. Or perhaps we’ve been so spoiled by the epic experiences of the console games that there was no way an iPad game was going to hit expectations. I don’t know which is the case, in truth, but while this effort is substantially more compelling for fans than some of EA’s efforts, it’s unfortunately never going to be seen as anything more than a “mobile” title.