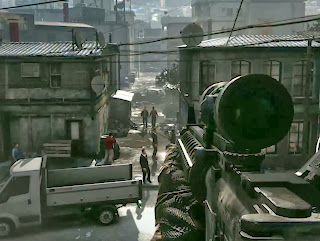 Another year comes and goes and with it comes the latest instalment in the Battlefield series. Battlefield 4 is what you’ve come to expect from the series but at the same time, the developer, DICE, has taken a lot of time to refine the game and how it’s played.

I’ll get the single-player out of the way quickly as Battlefield is primarily a multiplayer game. First person shooters have nearly always struggled to create a good single-player experience, and Battlefield is no exception. The developers have struggles to impress with the large-scale destruction while at the same time sticking to the traditional genre theme of funnelling players down corridor after corridor. On some missions you don’t even get to fire a gun until you’re halfway through. There’s defiantly ambition in the production values with scenes of ships getting torn apart and a set piece involving running through a building that’s falling apart whilst getting shot by a helicopter, but you’ll get over that quickly and find much more enjoyment in the multiplayer.

And that’s where Battlefield truly shines. The latest instalment brings back the modes we know and love such as Conquest and Rush, but also includes two new modes. In Obliteration, two teams fight for control over one bomb, which can be used to blow up your opponent’s objectives. Though if you’re carrying the bomb and you die, anybody can pick it up, so there’s a nice element of risk/ reward in there. Defuse is Obliteration on a smaller scale, but you only have one life. Rounds are quick but call for much more strategy, because the consequences of getting caught are more severe. 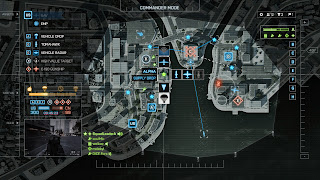 There are ten new maps to play around on, all affected by the new “levolution” system. Every map has some object such as a dam or a satellite dish, and when they’re destroyed by explosives the map changes. For instance Paracel Storm takes place on many tropical islands, yet as the battle progresses, the storm gets worse. Waves get higher, ships run aground and the mayhem gets even more manic. Flood Zone is situated right next to the wall of a dam. If it’s damaged enough it will leak and flood the rest of the map. Most maps don’t have this large-scale destruction, but there’s always something to destroy.

Now the first few times you play the level and still learning the ropes these changes are significant to the flow of the game. But as you progress in the game they don’t feel that important. It seems to be more a natural progression rather than an unexpected turn of events, and becomes easy to adjust to. The Frostbite 3 engine is put to better and more random strategic effect when you blow the wall separating you and your enemies, causing the roof to collapse on them. 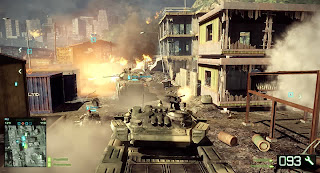 New players will struggle with the issue of the huge learning curve. The amount of weapons, unlockables and gear is incredible, but you can only unlock them by playing the game more. At the start, all four classes have basic weapons that are just not competitive and will see you getting killed quite often. There’s also a few tricks that newer players will struggle to come to terms with. For instance, if you have a laser sight equipped on your weapon, opponents will be able to see you around the corner and know you’re there. At the same time, getting shot because you forgot to reload your weapon teaches you to always reload when you have the chance. Rarely do two battles go the same way, and the highly dynamic nature of combat in Battlefield might even through off some veterans of other, more static FPSers. But with experience that energy is what keeps you on your toes and the game so exciting.

Now I’ve had the change to play Battlefield on PC, the PS3 as well as the Xbox One. The difference between the current generation and next generation is astounding. However if you’re serious about Battlefield then you have to look at the PC option. It’s a lot more friendly to the squad nature of the game. Don’t have a microphone? Use squad chat with your keyboard. Speaking of such, the squad system has been improved in the hopes of making it more efficient. Now increased to five players in a squad, you share perks throughout playing the game. If you’re the last man in the squad and you die, you lose your perks. It’s just one of the ways another layer of depth is added. 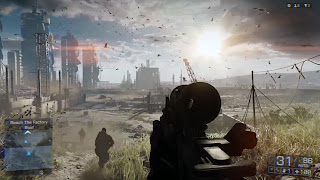 And the new Commander mode that Battlefield 4 offers is going to be a requirement of future games. One player can choose to play as the commander and while they don’t participate on the battlefield, they are given a birds-eye view of the whole map. They can command individual squads to attack different objectives, scan the area for enemies and deploy supply kits. The challenge is for a casual player is whether they listen to what they’re being told to do or do they choose to play as they want. It can bring a brand new layer of strategy into the battlefield when used correctly, but it will require a really fine commander with a strong grasp of real military tactics for the role to be a strategic advantage.

Even though my computer is not high-end, Battlefield 4 looks incredible. At the start of the match, you get the sense that real people could have existed in these environments. Pages of the newspaper fly around, computers are still logged on, cars abandoned. And then there’s the destruction. Glass shatters and if it hasn’t been broken you can see the cracks in the pane. Chips of concrete fly off the wall showing the reinforcements on the inside. It’s this level of destruction that makes it all feel more realistic. The storms you get caught within, the glare of the sun and the reflection off the water. It’s as pretty as war gets. 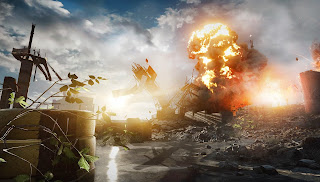 It’s common for most games heavily reliant for its online components have quite a lot of faults that need to be patched in subsequent weeks. With the PC version, launching the game opens you web browser to Battlelog. This has issues with Battlefield 3, but EA has ironed those kinks out and now it’s an easy way to get into a game. From there you can go into the campaign, compare progress with your friends and change your loadout. I did find on both PC and PS3 versions that the campaign does suffer from some loading issues however. The characters will stop completely at points in order for the game to load what comes next. Not to mention my PS3 crashed multiple times on the first chapter of the campaign.

At the end of the day, it’s Battlefield. If you played Battlefield 3 than you’ll know what’s in the latest instalment. If you haven’t played Battlefield before, and you want to try an amazing squad-based tactical first person shooter than give it a go. You will struggle the first few weeks but there is a lot of enjoyment that comes from large-scale warfare.