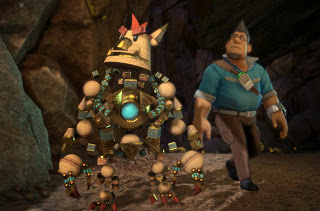 Knack was one of the two retail Sony exclusive titles that were carrying the PlayStation 4’s launch hopes. The problem is instead of ushering in the next generation of gaming, Knack feels decidedly last generation. It brings very little new to the table while feeling overly familiar at the same time.

The world of Knack is one that is plagued with human society at odds with the goblin nation. The goblins have weaponry that seems to exceed their means as they take on an offensive posture and raid human settlements. The humans bring together a handful of people with varying sources of motivation to fend off the goblin offensive, but the centrepiece is an adorable little guy with a deep voice called Knack.

Knack is the creation of a doctor who discovered his power source on an expedition a long time ago, and he has found a way to have Knack harness the power of runes, which serve as a mysterious source of power to the humans. As Knack encounters more runes throughout his adventures, he grows in size and power. This is the game’s primary hook, because as Knack grows in size, he gains more health and can jump to heights he otherwise cannot at his normal stature. 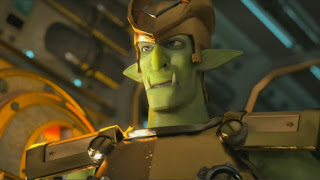 Quite regularly Knack’s size is reduced because of changing levels, the story coming up with artificial reasons to regress his progress. Thankfully there are gems and invention pieces you can find along the way that can help Knack unlock unique abilities, such as finding hidden doors or doing extra damage if you string together eight hits without taking one yourself.

You also have a trio of special attacks that vary little in the impact they have. All of this makes Knack an accessible adventure game with some basic platforming elements. Unfortunately things never become any more advanced than this. You have a few special attacks, ground and jumping attacks and a dash move. This also makes Knack’s adventure repetitive. The damage you take on normal and hard difficulties can also feel unforgiving; with just a few hits it’s game over for Knack. Knack’s visuals are definitely appealing to a younger audience, but that same audience might find themselves frustrated with the gameplay that is on offer.

The graphics are interesting. They seldom feel like something we might not have seen this last generation, but they are vividly coloured, well animated and providing excellent detail. Knack’s character design in particular is a stand out here, with outstanding small objects comprising his form. Shadows also mirror the movement of Knack very nicely.

Some of the outdoor elements feel surprisingly lifeless, however. Making your way through forests and similar environments, you seldom see leaves, trees or bushes moving during to wind or character impact. Enemies are not overly varied in design or function. How impressed you are with the cutscenes will depend on how you feel about the character design, which I was fine with. They remind me of the characters from Pixar’s Up, where they are a bit stocky with exaggerated facial features like elongated or bulbous noses. 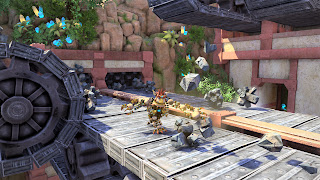 If the story was more interesting, perhaps the journey through the game would have been more worthwhile. Unfortunately the characters are seldom interesting, the story seems to lack focus and the combat so repetitive that by chapter five or six, I felt like I had seen everything Knack had to offer. There are a few puzzle-like elements that get sprinkled in later, but by then they are too little and too late to really impact the experience.

Knack is not a really long game, but it starts to feel that way. Things begin to feel dragged out around chapter ten and on. Knack is meant to be replayed, so you can make use of your gadgets and gems. Sadly I doubt I will ever feel compelled to play through Knack a second time.

Knack is perhaps being judged unfairly, but this was chosen to be a launch title for the PlayStation 4’s attempt to usher in of the next generation of console gaming, and it’s just not up to that task. Knack feels like an action platforming title we would have been happy with a couple of generations ago.

Review: The Legend Of Zelda: A Link Between Worlds (3DS)