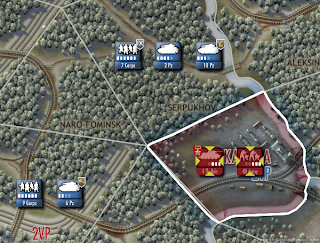 Drive on Moscow, the follow up to Shenandoah Studio’s previous wargame, Battle of the Bulge, is a near carbon copy of the engine that ran the team’s previous effort. That’s a good thing because there are still far too few genuinely serious wargames available on the iPad, let alone ones that are as replayable and rich in depth as this.

As with Battle of the Bulge, Drive on Moscow follows closely a real conflict; in this instance the push of Axis forces to occupy Moscow before the winter could set in during World War 2. Of all the conflicts that marked World War 2 this is one of the most fascinating for students of history, as it pitted two supremely evil men (Hitler and Stalin) against one another, while desperate soldiers on both sides fought and died in a conflict that would mark the turning point in the war for the Allied armies.

Students of history would know that the Axis forces were not able to occupy Moscow (only just, mind you), and the resulting defeat for Hitler’s army started the retreat that would eventually result in the capture of Berlin and the conclusion of the war (in Europe, at any rate). It’s impressive how accurately the developers has researched the progress of Hitler’s Russian campaign. Forces are accurately represented on the map by little counters, and their relative strength is abstracted in a nice, easy to read manner. Though it is abstracted, however, it is accurate. It’s possible to follow almost precisely the strategies and unit movements that occurred in the historical campaign – and arrive at much the same result. So for armchair generals, the opportunity to prove their strategic poweress and change history is going to be a compelling puzzle for the mind. 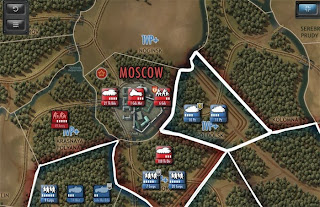 The map this campaign plays out on is split into regions, with the more important areas being worth victory points and Moscow being the tantalising end goal at the furthest reach of the map. This is a large and sprawling map – much bigger than what we saw in Battle of the Bulge, and so there is much greater room to make more in-depth strategic planning; to set up flanking maneuvers and hammer and anvil tactics.

But these maneuvers need to be carefully planned and executed. This is a turn based game, but in each turn players are only able to move units from one region of the map. It’s almost chess-like in that understanding the order in which movements and attacks need to happen for optimal effect is a big part of the strategy of this game. It’s also a big opportunity for your opponent to mess with your strategies by taking a preemptive strike or skipping a turn to mess with your momentum (unlike chess it’s possible to play a “wait and react” game by skipping turns). The strategies required of players differ completely whether in control of the Germans or the Russians; the Germans need to be aggressive as Moscow is very far away indeed and winter is coming (Ned Stark would be proud of me for writing that). The Russians are hopelessly outgunned, but then they only need to play a defensive action and they have a couple of handy tricks up their sleeves with fast cavalry units to mess up enemy supply lines.

As with the best wargames, battles are won and lost as much from the manipulation of units than their strength. This is, after all, the ultimate example of an underdog victory, and if sheer force was going to be enough to win it wouldn’t make for a very enjoyable game. But the Russians do enjoy strategic advantages on their homeland and so the developers are able to get away with accurately recreating the battle without necessarily balancing the forces. As a hint to the Russian players; In Drive on Moscow maintaining supply lines is key to the survival of units, so use the size of the map and the mobility of your forces to cut the supply lines and win as much through attrition as combat victories. 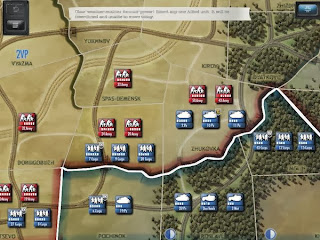 Credit deserves to go to Shenandoah; the AI in Drive on Moscow is excellent. Though the multiplayer is naturally the better option, Drive on Moscow’s single player game offers enough to challenge even strategy veterans. I’ve played dozens of strategy games and the most common exploits are all-to-easy to transfer from one game to the next. Drive on Moscow surprised me on more than the odd occasion. It might still be a training mode for the online and local multiplayer options, but as training modes go this is a good one.

As with Battle of the Bulge, Drive on Moscow is very much an example of quality over quantity. I suspect the AI wouldn’t be as capable if there were dozens of scenarios, but because there’s just the one map and a handful of scenarios to play through, Shanandoah is able to provide players with an AI custom tailored to the situation. The map and units look like a high-quality board game, and though there’s not much animation as a result, what the game does offer is a stylish, easy-to-read interface and a high quality map.

No one is going to argue that hardcore wargames are for everyone, but if you’ve ever enjoyed a strategy game, be that Fire Emblem, Civilization or Europa Universalis, then you owe it to yourself to try this game out too. Drive on Moscow is in so many ways the ultimate example of strategy gaming, because it’s one of the few that requires genuine military strategy of its players in order for them to succeed.