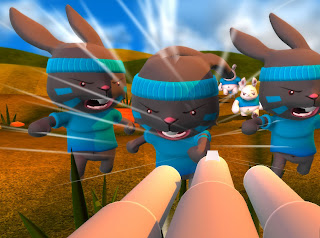 After a couple of announcements about games that it is set to publish for other developers, Nnooo has finally unveiled its first game since escapeVektor; Blast ‘Em Bunnies.

Picture, if you will, the turret gun section of a FPS. Blast ‘Em Bunnies is an entire game built around that section. Players take control of a bunny with a turret gun, mowing down hordes of enemy bunnies before they reach their position. It’s a common enough little arcade game setup, but if there’s one thing we know about Nnooo, it’s the team’s spectacular ability to take a simple idea and turn it into an addictive as all heck full-featured package.

“You have to keep your bunny alive as long as you can. The longer you play, the more difficult survival becomes. But it’s not just your own bunny’s mortality you’re concerned with. You also need to deal with the throat slitter who is holding your baby bunnies hostage. He’ll pop up every now and again with one of your little ‘uns. Kill him quickly and the baby bunny escapes. If you’re not quick enough…well, I really don’t want to talk about it,” Nnooo creative director, Nic Watt, said in a press release. Sounds fun, right?

The game will be released on 3DS, Vita, and PS4. Notably, there’s no Wii U version announced at this stage.

The game will be playable at the upcoming EB World Expo in Australia. We’re going to give it a full spin and let you know what we think then.

Review: Rage of the Gladiator (3DS)

Want to play the worst FPS ever made? Daikatana hits Steam