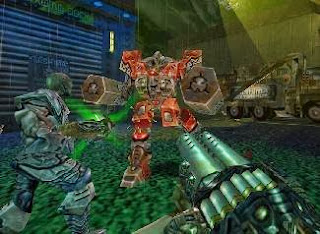 Remember Daikatana? If not, that’s possibly because your memory has blocked the experience out to preserve your sanity.

John Romero’s follow up to Doom and Quake was nothing short of horrific – not because it was the same kind of B-horror world of Doom and Quake, but because it was quite possibly the greatest steaming pile of poop that you could ever play. You thought that recent Duke Nukem game was bad? That’s nothing.

There wasn’t a second of Daikatana that was entertaining back when it was released. I can’t for the life of me imagine that it has gotten better with age, but hey, if you’re the kind of masochist that likes playing terrible games, rejoice! For some insane reason Daikatana has been released on Valve’s download portal for $7. Perhaps so that every developer that releases a game on there going forward can legitimately say “well, at least we’re not the worst there is on Steam.”

To hell with Call of Duty, Nnooo’s announced a shooter with bunnies