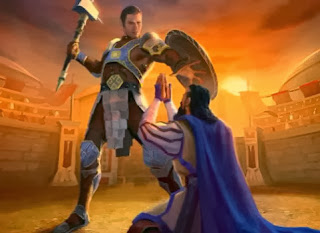 Originally released on Nintendo’s WiiWare service, Rage of the Gladiator saw to a fairly positive reaction, all up. But it slipped under the radar, with no real marketing budget despite being a “big” WiiWare release, and few media outlets running a review. After an iOS version that was never going to top Infinity Blade despite a similar theme it’s now on the 3DS as a direct port sans the interesting motion controls.

The story isn’t Game of Thrones worthy; apparently Gracius’ father has been slain and he’s at fault for it. His punishment is to endure battles with randomly thought out and ultimately uninteresting gladiators. There’s no backstory or lore to be found when venturing forward. Take the first gladiator for example: He’s an orc that calls to his God for strength that, after three yells, increases his attack, his blocking ability and he even grows to titan size. But that’s it to that character. It’s hard to really care about fighting him, and five minutes in and I found is hard to be inspired enough to work through to the next battle. 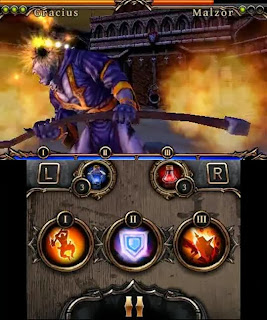 The first thing that popped in my mind when adjusting to the game’s quirky gameplay was Nintendo’s Punch Out!! series. Think Punch Out!! but in a first person perspective. Swinging left to right, dodging, countering, blocking, and using special moves are all a part of the gameplay in Rage of the Gladiator. Counters fill up a mana gauge that allows the player to unleash a super effective ability just like it does in Nintendo’s boxing simulator. It’s also possible to restore your health, which perhaps makes the game a little too easy for its own good for a large portion of the game.

Skills are un-lockable in three somewhat different ways. If you focus on flat out assaulting a foe, you’ll be rewarded with Offense points. Blocking simple attacks, special attacks and spells reward you with Defense points and Magic points are, well, self explanatory. These unlocked abilities can be leveled up after defeating gladiators and can prove to be effective later on in the game.

That customisation is nice because it adjusts to the way that you like to play. But the armoury is nothing of short of abysmal. It acts as the store of the game and provides a simple layout of good to god-like weaponry and armour to acquire. Problem is that this in no way spices up the gameplay in terms of providing players with an interesting range of beneficial outcomes. In other words, it lacks the excitement of finally acquiring that awesome sword in Infinity Blade. 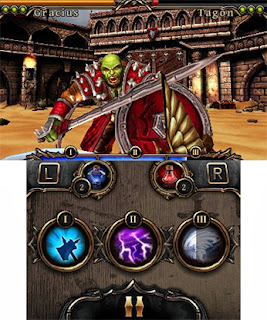 The presentation isn’t that inspiring either. As predictable as it may seem, the audio is made up of generic grunts, wails, and considerably cliche ‘epic music’ usually found in gladiator entertainment. None of this is immersive and it doesn’t bring the world to life. Graphically speaking, the character animations are choppy and haven’t clearly taken the hardware into consideration.

Rage of the Gladiator continues to disappoint well after you’ve endured the last gladiator’s wrath. Your only means of replay value is solely buying all of the equipment via replaying gladiators. Given that there’s not that many enemies to start with, this is a fairly poor way to pad the length out. With a lack of content, choppy visuals, forgettable soundtrack and characters, an absence of multiplayer offerings, the implementation of the worst RPG elements found in that genre, and an overwhelming sense of mediocrity, Rage of the Gladiators just doesn’t live up to the top games in this little genre.

Interview: Lorne Balfe, the musician behind Assassin’s Creed 3 and Beyond: Two Souls

To hell with Call of Duty, Nnooo’s announced a shooter with bunnies