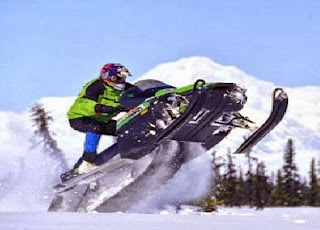 Racing video games tend to sway in one of two directions; either hyper-realism or pure arcade action. The first category contains games like Gran Turismo, Need for Speed: Shift, and the majority of Codemasters titles. The other category contains the Burnout, Mario Kart, and F-Zerogame franchises along with various one-off games. There rarely happens to come along a game that achieves a middle-ground; the only one I can think off immediately is Trackmania.
Snow Moto Racing 3D first appears to attempt and reach that middle-ground. Besides having a boosting mechanic, every other aspect of the game quietly sits between realism and exaggeration. If Snow Moto Racing 3D felt content with itself to remain that way, it would be an uninteresting game offering nothing for either fan of the racing game genre. However, Snow Moto Racing 3D eventually sheds its normality for more arcade action, ultimately saving itself from crushing mediocrity. 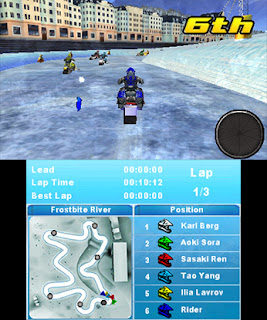 Snow Moto Racing 3Dtasks the player with completing a dozen snowmobile racing cups. Besides single races and a download-play multiplayer component, there is not much to do. What only emphasises the lack of game modes is the extremely restrictive vehicle choice and the relatively slow nature of the races. The first quarter of the game, consisting of three cups in one, “Season,” moves comparably as fast as any 50CC grand prix in Mario Kart. And unlike in Mario Kart, the first handful of races in Snow Moto Racing 3Ddon’t have interesting weapons or aesthetic splendor to captivate the player. The only bit of variety outside of the pure racing is the trick system, which can be easily used to gain boosts that makes the races an easy cakewalk for anyone even remotely familiar with the racing genre. It all combines to create an unfavorable first impression.

However, after those first three cups the game quickly picks itself up and starts showing promise. Each successive cup in Snow Moto Racing 3D increases race speed, transitioning from 50CC to 150CC in a surprisingly short time. Rather than unlocking clearly better snowmobiles after every cup, the game instead unlocks several purchasable vehicles after specific cups, allowing the player to make choices in what vehicle attributes they want to prioritize. The trick system becomes essential, as boosting provides an edge against the more aggressive AI and the money earned from those tricks is necessary to purchasing the highly-priced vehicle. It all comes together in an enjoyable package.

(If this game interests you you can also check out Aqua Moto Racing, by the same team)

What starts off good and persists is the track design and the music. Track design is surprisingly varied, with courses being able to stand out from their brethren. Specifically the track design in the cups taking place in Asia host unique courses, displaying variety even until the very end. The music on the other hand, while not varied or unique, contains several electric guitar tracks that are fitting of the mood of extreme sports without any of the realism.

Overall, if players can stomach a sour opening they might enjoy this game. Snow Moto Racing 3D begins slow and confused before quickly regaining its feet and delivering enjoyable arcade action. The overall impression is that of mild excitement, even though the first 30 minutes or so may suggest otherwise.