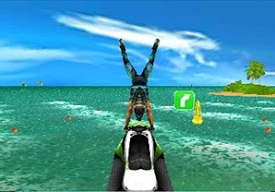 Aqua Moto Racing 3D is rather humble in the current landscape of racing games on the 3DS. It has no star power, no prestigious franchise history, and opts for a comparatively niche jet ski theme. Even the title is modest, making no bold claims and presenting only factual information. Impressively enough, it’s also a competent package that suffers more from being devoid of personality than anything else.

Being a water sports game, Aqua Moto Racing 3D is a tad different from the average racer in that levels are extremely linear affairs based on tight turning and passing checkpoints efficiently. In fact, you’re penalized for each one you miss and are disqualified if you miss three in one map. Still, tracks are scarcely vexing to navigate and the few that are become intuitive once you’ve spent a couple of practice runs to come to grips with the tracks. Throw in some ramps to perform tricks on and boost functionality to keep things competitive and you’ve got a thoroughly acceptable formula. It’s also one that rewards skill while still being basic enough for inexperienced players to compete.
There are several modes to tinker with, but by far the meatiest is the championship mode. Each tournament contained within features three brief levels against several computer opponents. Each set can be completed relatively quickly, but the sheer volume of stages and diverse level designs allows the game to shine as a pick up and play experience. 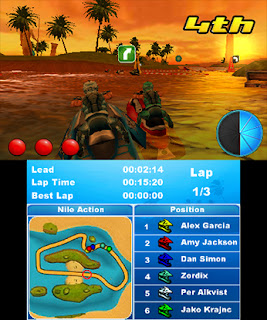 The core game is nothing truly groundbreaking, but using a theme from relatively uncharted waters makes for an experience that differentiates itself even amongst the likes of Mario Kart. Aqua Moto Racing also aims to emulate the real world more so than most titles via locales based on particular countries. The game still opts for accessible, arcade-style controls, but they are appropriate in ways that a realistic experience would not be.
The addition of a monetary system also helps the game stand out, though the implementation of this is questionable. Each stage is littered with money bags and treasure chests to encourage solid steering skills, but some are placed in obtuse locations that are only self-destructive to the player to try and grab. Despite that, racking up cash is also obscenely easy thanks to the trick system, to the point where it has no impact on the game at all; as things become available to purchase, you’re guaranteed to have enough cash to purchase it. It’s a neat concept but one that ultimately fails to even pad out the experience.
There are also several minor mechanical faults to prod at such as the exceedingly lacklustre framerate in 3D mode (which is always disheartening for a game boasting “3D” in its title), but my chief criticism is not even the fault of the developers. Rather, it lies in the use of stock characters (literally every one is a colour swap), vehicles, and locations. This might be passable for certain sports, but it’s especially prevalent here when the most common sight is water and your eyes are inclined to seek out differences in each level.
To me at least, the game became slightly numbing due to the generic atmosphere. As much as I thoroughly enjoyed the actual racing, I found the assets used actually detracted from the overall experience, if only slightly. There is a vague attempt at player customization, but just changing your name and colour probably won’t set the hearts of the masses ablaze. Some rather riveting background music can lift the mood at times, but the swanky sound waves slowly evaporate into those of the oceanic variety.
Aqua Moto Racing 3D may be a game best played in short bursts because of this, but it’s still worth checking out for those interested in the genre. There are far worse racers out there and this one is generous enough to include such worthwhile features as six-player download play for the paltry admission price.