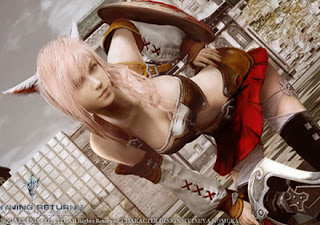 A convention is never a good environment to trial a game that is likely to last 50 or so hours. If I had played a random 20 minutes of Final Fantasy XIII I would never have been inspired to pick up the final game, and that would have been a pity because I fall firmly in the group of people that enjoyed that game for what it was.

It’s good to have control of Lightning back. One of the finest female characters that Square Enix has created – nay, one of the finest female characters ever built, Lightning is an empowered and charismatic hero, and I do like that there’s no distractions around her in terms of allies and other NPCs – this is Lightning’s quest, only Lightning’s quest, and this allows her to shine. It might be a little disorientating to some at first that there are not other controllable characters, but it won’t take long to make the adjustment.

In that context it is disappointing that Square Enix has decided to go the juvenile path of upping the raunch factor. Lightning has bigger breasts this time around and her costumes have less material. The costume I fought a battle in seemed to be an imitation of Rikku’s g-string and miniskirt from Final Fantasy X-2. Only this time it comes in a sexier black. 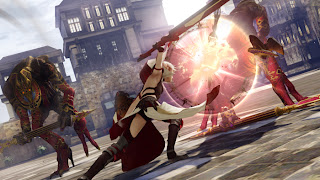 There was no need to do this. Lightning was already an attractive, interesting and empowered character. This fan service reeks of a desperate need to up sales, and personally I would have preferred if the developers decided to do that by highlighting the gameplay itself, which feels nice and strategic based on the one boss that I fought.

In this game players have a pool of action points that steadily regenerates. Each attack takes up a certain number of action points, with the more powerful attacks using more points. Wait a while and you’ll be able to string together a mighty attack sequence. So, while it’s nominally an action battle system, it demands strategic and careful thinking; in other words it strikes a nice balance between a traditional Final Fantasy combat structure and something more visceral.

I didn’t get to test out the costume change element, but basically each costume will give Lightning different attack options, and changing between them will be necessary to defeat the more difficult enemies. I also didn’t get to experience the real-time clock that is said to be ticking in the background to make Lightning’s quest that much more urgent and dramatic.

And of course I wasn’t able to get a feel for the narrative, pacing or how open the adventure is. A 30 minute demo is hardly enough of an experience to form any ideas about whether I’ll enjoy the final product of Final Fantasy XIII-3. But for the most part the demo did leave me more excited about the game than I was going in.

Hands on with Ryse: Son of Rome