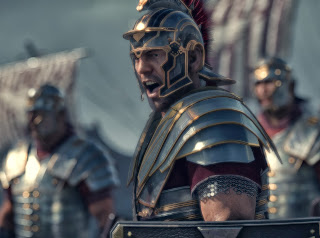 One game that really stood out for me at the EB Expo 2013 was a launch title for the Xbox One; Ryse: Son of Rome

A cinematic action adventure title that Microsoft seems to be heavily relying on to sell consoles, the expectations of this remarkable tale surrounding an unwitting centurion from Ancient Rome is high. Whilst the many specifics of the story are still, understandably, being held close to the chest what I did see promises to offer juicy plotlines of revenge and patriotism.

Dropping into the stunning visuals of an extensively and impressively detailed rendered Roman world that can only be described as something a step above current console experiences, this is a game that does feel authentic to the kinds of fantasy historical action films that we’ve seen over the years, such as Gladiator. 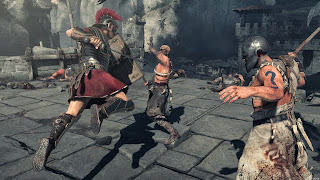 In my time with the game I got to experience the multiplayer co-operative mode where the players attempt in tandem to fight off hoards. This was simple, intuitive and easy to learn, the combat system is appreciably good. Whilst it feels less fluid then that elephant in the action world (God of War), it is not to the detriment of the experience. Rather, it feels significantly grittier, more credible and remarkably fun. Gameplay allows a plethora of attacking, defensive and weapons customisation approaches as one struggles against the various waves of enemies that greet you in a bloodthirsty gaming environment that marks the gladiatorial arena. Staying true to the polytheistic setting of the ancient world, the gladiator also chooses from one of the pantheon of Gods, though the long-term affect of that decision still awaits me in the full version.

I presume that the single player game will get far more in-depth, though I didn’t get much of a chance to experience it. All I know is that there’s barbarians to be killed and glory to be found. This being a Crytek game and all it’s almost guaranteed that the experience will be completely linear and the nature of the game means it will be combat heavy, so I assume that impressive AI will be mandatory for the experience.

CryENGINE was a good choice to show off what the Xbox One is capable of. From the facial animation realism and motion capture, to the proposed increasing power of voice commands where motivational cries can rally troops and focus attentions, turning the tides of massive battles, Ryse: Son of Rome will be another impressive, if not completely innovative, launch title for people to sink their teeth into.

Lightning Returns: Final Fantasy XIII-3; Getting hands on with Lightning