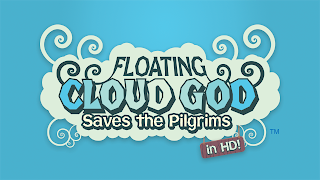 Floating Cloud God Saves the Pilgrims was originally a PS Mini title for the PSP, and one that was held in high acclaim. It was a unique horizontal shooter in the same vein as The Game Atelier’s Flying Hamster, but wasn’t quite as much fun as, in my view, the controls were less than ideal. Dakko Dakko has brought the title back once again as a native Vita title in HD, and the Vita’s second analogue stick rectifies those control issues in the process.

If past PSP titles like Patapon and LocoRoco fit your appeal, then Floating Cloud God is right up your alley. The colourful aesthetics are pleasing to the eyes and radiate the game’s playful nature, and the upbeat soundtrack fits right into place. Like the titles mentioned above, the game holds a certain zaniness that gives it a style all onto its own, but I’m sure the name alone gave that part away.

Taking up the part as the invincible Cloud God, you float in a cloud (imagine that) to protect your pilgrims below as they make their way to the safety of the temple entrance at the far end of the level. The pilgrims move on their own accord and you use the analogue sticks to float around and shoot bits of cloud at all of the evil deities that desire to do nothing more than to see your pilgrims’ pilgrimage come to an abrupt end. 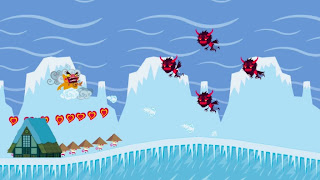 A clever gameplay gimmick that’s at play here is that the pilgrims send their prayers up to you in the form of hearts and collecting these bits of faith power your cloud’s ability – collect enough of these hearts and you’ll move faster and shoot devastating thunderous projectiles. The tradeoff is that shooting these lightning infused projectiles finds your cloud’s power depleting, forcing you to continue collecting the pilgrims’ hearts to maintain your powers.

This also means that you must keep the defenseless pilgrims alive at all cost, even if that means taking a hit to save them, which finds all of your cloud’s power zapped instantly. Each of the game’s comical bosses are ingeniously designed to twist this unique gameplay blend into a variety of ways. Not only will they make you think, but they are strong enough to put any floating cloud god’s skills to the test.

With its native Vita release, not only have the graphics seen a beautiful upgrade to HD, but the addition of trophies give the game the needed replay value that the PS Mini version lacked. Going back to try and finish all seven worlds and bosses without losing a single pilgrim for the elusive gold trophy is a challenge that only the mightiest of cloud gods will ever achieve.

Floating Cloud God Saves the Pilgrims in HD is another fantastic indie title in the Vita’s ever growing library and one that is extremely easy on the wallet to boot. Whether you played it in the past or not, this Cloud God’s thunder is simply too powerful, and too much fun, to not harness it for yourself.