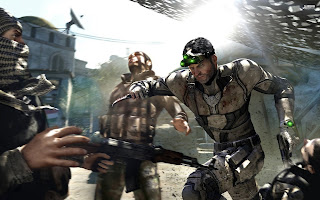 Watching the Splinter Cell franchise develop from its Playstation 2 genesis is like watching the very industry itself go through its stages from that generation to the end of this.

Those wonderful, early Splinter Cell games were for their time an incredible achievement in stealth gameplay. Back in the PS2 era developers were producing a wide range of different experiences for the headline game portfolios, and Splinter Cell was in some ways quite experimental. Combining a likable lead hero with some linear levels that always felt open thanks to the variety of ways in which players could approach challenges, the early Splinter Cell games were about as subtle as material gets when it carries the Tom Clancy branding. Here was a set of games that rewarded patience and strategy, while straight-up gun fights rarely ended well.

Fast forward to 2013 and the first thing you’ll see in Blacklist is hyperkinetic dialogue, big explosions, and nice, clear indicators for how to dive from cover section to cover section while some bright lights clearly point out when the enemies are going to see you, and when they won’t. It’s easier to play, that’s for certain, with less room for human error mess up the execution of a strategy because the game controls so well. 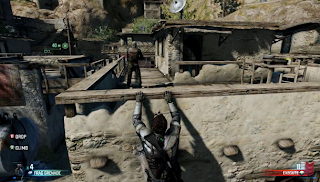 Blacklist has weapon loadouts, upgrades, and sections where stealth seems to be near-impossible. For those sections, even if it is possible to stealth them, there’s little point to do that because shooting your way through is more convenient. In fact, many levels can be cleared by running through and shooting everyone. Levels are more linear than ever before, with clear paths through mechanical human opponents if you do wish to avoid detection. There’s greater thrills and more impossible situations to contend with than ever before, and leading man Sam Fisher looks like he’s gone through a professional wrestler’s boot camp.

It’s all macho, all American and far, far more action-packed than previous Splinter Cell games. There’s still the opportunity for stealth involved – don’t get me wrong there, this hasn’t become an outright shooter – but the game has definitely taken inspiration from the popular shooters of the generation, and it seems to have been built with the people who have no patience for stealth in mind. Checkpoints are spaced nicely throughout, taking away any fear of failure, and that lack of consequence is my greatest issue with Blacklist. Stealth games, much like horror, rely on tension. Tension that is only built when there’s the knowledge than an error will penalise the player in some meaningful way. That’s not there with Blacklist; a clear concession to the fact that people would rather run through levels and get through to the ending rather than experience something rewarding. 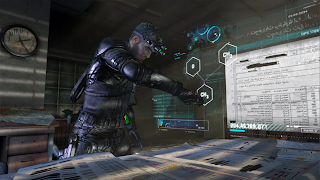 I must admit I am a little disappointed with this shifted focus of Splinter Cell games, but on a purely primal level boy does the game look and sound good. This is a full, slick production with stunning animation, quality voice actors and some spectacular gunplay. There’s solid weight behind the movement and gunplay this time around, which gives players a nice sensation of power to their actions. As a pure spy fantasy Ubisoft has nailed the idea that exotic levels and gadgets combine for a lot of fun.

The plot itself is bombastic, even by Clancy standards. There’s a lot of standard spy material in here, but its delivered through cut scenes that snap through far faster than any but the most dedicated of Splinter Cell fans to follow. If you think of a Michael Bay film, and then add in a script written by someone decent, you’re probably in the vicinity of Blacklist.

It’s easy to say “this game is fun.” For many that will be enough. But given what Splinter Cell could have been, being “fun” isn’t really enough to hit the heights of the earlier games in the series. As I said at the start, Blacklist is a metaphor for the entire games industry; here is a game that has been homogenized in order to appeal to the same people that all the other AAA-games appeal to. In doing so, it’s less recognisable as a game with its own personality. I’m disappointed with Blacklist. It’s not that I’m not a fan of Tom Clancy games or Sam Fisher, it’s more to do that I’m increasingly tired of the dominant modern game formula, and that everything that is being shoved into that formula as much as possible.

Some will enjoy the sheer energy of this latest stealth/ action game. To me, it’s just lost that sliver of subtlety that I once loved about Splinter Cell.