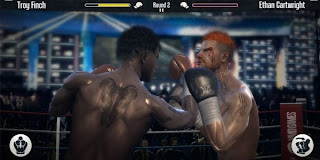 Real Boxing is another one of those indie games that was originally a mobile game and then remade for a handheld console. The thing is, I can’t imagine playing this on touch screens now, having played the incredible dual-stick setup of this Vita version.

As a full disclaimer upfront – I haven’t played a boxing game since right back on the DS, and before that the Game Boy Advance. I’ve never played a “HD” boxing game, which is essentially what this Vita game offers. I’m going to keep a closer eye on this genre in the future, because I’m liking what the genre offers.

As a sport, boxing if a fascinating case study. Where most sports are abstract recreations of military conflict, boxing is an old sport that is literal conflict. As a consequence it’s primal, earthy and nice and easy to follow as a spectator. While I don’t watch many boxing matches, that accessibility, in terms of rulesets, means that I was able to jump into Real Boxing without the need to do any prior research or wade through complex tutorials. A little bit of practice in the training room and I was blasting my way through the competition like no one since Rocky. 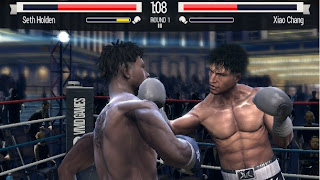 This is a fairly serious attempt at recreating the sport of boxing, with a range of different strikes with both the right and left arms to aim for either the head of various critical body parts. These attacks are executed through a remarkably precise right controller stick. Then there’s a block/ dodge button and… that’s basically it. It’s a remarkably elegant system for a game that is far more complex than that. Players need to manage a stamina bar while finding weaknesses in their opponent’s guard, or making well-timed dodges that leave the opponent wide open for massive damage.

Though it takes time to master the game (just try jumping into the robust online multiplayer without experience), there’s such a perfectly balanced learning curve that I went from utter beginner to boxing to really feeling like an expert by the end of the game. There’s a nice levelling-up system that helps to visualise the progress you’re making as well. 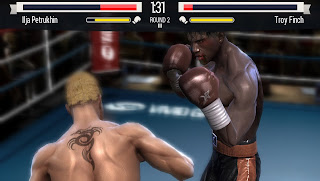 And then the game looks so good that it’s hard to believe that this didn’t come from a major studio. The Unreal Engine is a rarity amongst indie developers, but it’s really great to see small teams gaining access to such powerful toolsets and pushing the engine to the point where, aside from the AAA-games on consoles, building games that have no trouble competing with the big guns for visual fidelity. This particular developer, Vivid Games, has gone the extra mile to bring in motion capture to help generate authenticity. As a result Real Boxing feels like a full-budget sports game.

Real Boxing is a perfect example of why I love what the Vita is becoming. It’s one of the many indie games that are finding its way onto the console, and while it’s not worth buying a console for, once you have one of Sony’s powerhouses in your hands it’s well worth the download, because it’s absolutely worth the investment.