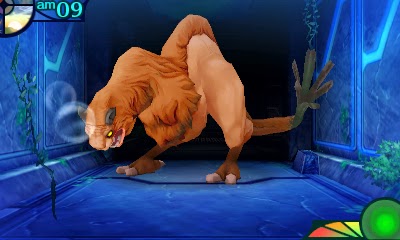 This has been a really good year for the Nintendo 3DS – doubly so if you are a fan of RPG titles. Shin Megami Tensei IV is still fresh in my mind as I had a chance to play another dungeon crawling RPG. In fact, it was not that long ago that the latest entry to Etrian Odyssey IV: Legends of the Titan was released, but Etrian Odyssey Untold: The Millennium Girl does an excellent job of balancing what gamers loved about the original game, with new mechanics that have been hits far more often than misses.

The original game rolled out back in 2007, which really does not seem like all that long ago. If this was just slapping on a coat of paint with some new visuals and a 3D flourish for the handheld, this remake could have oh-so-easy to ignore. Thankfully Atlus did an excellent job in not only adding to the visuals and giving a remixed music composition, but a new mode of play and some new features as well.

The most notable difference is that there are two modes of play now. ‘Classic’ is the typical Etrian Odyssey experience where you create a party of characters from scratch and venture out into the wild, working your way through dungeons to earn loot, gain experience, return to the city and then cycle back out into the wild once again. There is a story, but it just sort of sits in the background. There’s nothing wrong with this approach at all – plenty of notable games such as Wizardry have being using this formula for years. 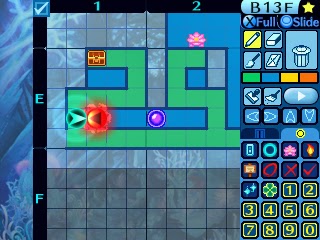 However, many gamers prefer a more tightly structured narrative to their RPG games, and the new ‘Story’ mode provides that in spades. The characters are all very well voiced, and while they can come across a little clichéd at times, some of them ooze enough charm and personality that you actually care what happens to them. This is a major departure from the original game, and even provides some excellent cutscenes and even an additional dungeon not found in the classic mode.

Probably the only significant drawback to the Story mode is that the characters are already set in terms of their classes, and it makes sense as it augments their personalities as you play. There are options later in the game to change a character’s class, but it sets them back so much that it really is not worth it from a progression standpoint. The classes chosen provide excellent balance and your party should not need for anything throughout the course of their journey, but it does limit the scope of things you will get to try and use. If you want to see what every class has to offer, you will want to go with the classic mode instead.

The game itself plays the same regardless of which mode you decide to pursue. When you are in the city, you move about using a menu system to choose locations like the shop so you can buy and sell gear. When you are out in the dungeons you play with a first-person perspective on the top screen, finding places you can drink water, gather supplies and of course – battle through random encounters with monsters.

Another nice addition are the Grimoire Stones, which sort of remind me of socketing from Diablo II or the materia from Final Fantasy VII. They have a completely randomised nature that can make them a bit unpredictable to use – especially if your party does not consist of the right classes/skills to truly utilise them, but they are a welcome addition that always had me excited when I acquired one. 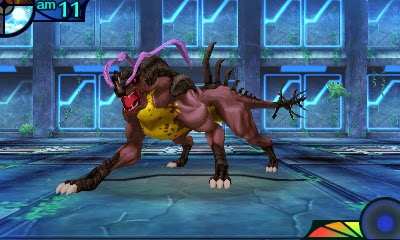 Having grown up on graph paper while working my way through dungeons in similar RPG titles, I found the lower touch screen’s mapping function to be excellent. It was very easy to draw up where I was headed, which is a perk early on and a necessity later in the game when the dungeons become incredibly expansive. It does slow the gameplay a bit, in that you are constantly walking, stopping and mapping, but the explorer in me enjoyed it (and this is why I still have tablets of graph paper some 22 years later after Shining in the Darkness released on the Sega Genesis).

There is adjustable difficulty as well, making the game a little more approachable for people who have considered titles like this before, but get spooked because they hear how unforgiving they can be. That being said, things can get a little tense when you are wandering deep in a dungeon trying to get back to the safety of town when you are in an area you really have not mapped all that thoroughly yet and your supplies are running low.

By all means, this is a great turn-based RPG game for the Nintendo 3DS, and if you have not yet tried the Etrian Odyssey series, this might just be the one for you.

Exploitation or humour; let’s talk about Dead or Alive 5