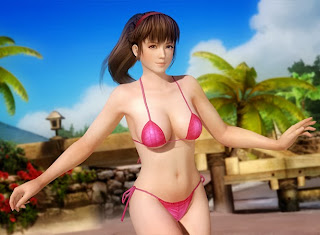 What can we tell from this? 1) The Dead or Alive DLC has been popular enough to sustain a constant release of costumes since the release of the original Dead or Alive 5. This leads to 2) Dead or Alive fans like a bit of titilation. They’re willing to spend almost as much on the game as they are on the costumes.

Why do I say ‘titilation’? Because of the content of these DLC costumes. I present exhibit A:

On the surface this is all very exploitative, and compounded by the fact that male characters of Dead Or Alive get only token treatment with these DLC costumes. Most people therefore immediately draw the conclusion that Dead or Alive 5 – and indeed the entire series that includes such classics as Dead or Alive Beach Volleyball – is exploitative and therefore a negative representation of women in games.

It’s not necessarily fair to blame the current Team Ninja for this. For a bit of history; Dead or Alive 5’s director, Yosuke Hayashi, took over the reins for the first time with Dead or Alive 5, and seems to have been forced to bow to fan pressure with the game. His original design for the game had the girls have more realistic body proportions to suit the more realistic faces that replaced the porcelain doll designs of the previous games. But that changed following a demo with those more realistic character design and a fan outcry that changed things back quicksmart. 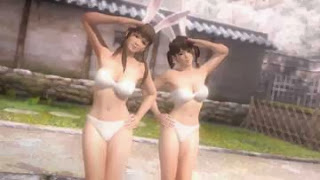 This in turn suggests that Dead or Alive has established around it a culture in which titilation is not only tolerated, but demanded, and anything that seeks to soften the sexuality is considered an affront to the series. In an interview with us last year, Hayashi went further to suggest that there are some cultural differences between what is tolerated in Japanese and what is considered unacceptable to mainstream western culture.

“I don’t think it would ever balance out,” Hayashi said on the potential for his game’s excess of violence and sexuality to offend. “There is diversity from all the various countries and regions, and that’s what makes the world interesting. If the market were to balance out, then we’d be left with games that are never edgy. Candy Crush Saga is an excellent game, but if all games were like that it would be boring.”

So according to Hayashi, Dead or Alive 5 and its sexualisation is edgy, not exploitative. Its target audience seem to want that edginess, making it difficult from a commercial point of view to be subversive to that edginess. And of course there’s the argument that when a development team of predominantly men are working on a game it’s difficult to see where the female voice into the work is.

But all that said I don’t believe that Hayashi and his team went out of their way to create something exploitative. In terms of intent, I don’t think Dead or Alive 5 can be considered exploitative at all. There’s plenty of humour in the game that clearly aims to put the sexualisation in context. Characters are way over the top, beyond their physical form and if your wade through the game’s story you’re in for some truly ridiculous situations.

But humour in itself isn’t enough to create a self-referential and self-knowing context that separates true exploitation from something that is critical of exploitation. It’s a point that is often lost in the critical discussions in the games industry, and often it’s all lumped together when in reality they shouldn’t be. Lollipop Chainsaw and Killer Is Dead, both Goichi Suda titles, are clearly self-aware. From breaking the fourth wall in Killer Is Dead through to turning gender expectations on their head, even as Lollipop Chainsaw’s Juliet Starling runs around in a cheerleader uniform, the games are as often asking players questions about what they’re doing as they are giving marketers easy material to use to sell copies of the game.

And this is where I feel that games like Dragon’s Crown and Dead or Alive become harder to defend. The intent isn’t there from the artists to create something exploitative, and if anything the goal is to use the sexuality in the same kind of ironic manner that drives humour and can be quite positive for the industry by creating discussions about a pretty important topic.

But while the intention isn’t there, the themes are just not quite clear enough; they’re not explored in enough depth, and as such players of Dead or Alive 5 are left seeing girls with remarkably big chests sweating on one another. In that context, I’m not surprised to see that there is so much criticism of the series’ use of gender, because really, when I have to dig so deep to understand why the game is the way it is (beyond the marketing of the game, which is indefensible), it’s hard to argue against that point of view.