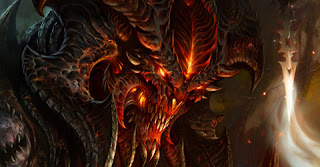 Ah Diablo. The game that spawned an entire genre. There’s just something about going clickaclicka clickaclikca clickclick that speaks to a very primal reason why we play games. That simple and predictably repetitive activity becomes compulsive once players figure out that by doing it, they’re earning rewards.

(Be sure to check out our review of the PC version)
Then they’re lost forever when they discover that those rewards are random. “Will THIS click earn me that glorious +5 sword, or will it dumb yet another useless club?” one player asks. “Is this treasure chest going to finally give me enough cash to upgrade my armour?” asks another. 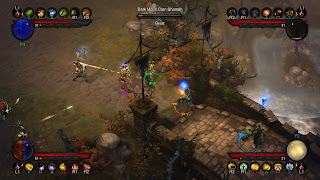 This is central to the very experience of playing games, and it’s why Diablo and its sequel were so special that they spawned the likes of Sacred II and the Torchlight games. Back when Diablo III was released on the PC, I think we lost sight of the reason we as a gaming collective love Diablo. Amongst the controversy of an always-online requirement for the single player game that at launch didn’t work so well, people got upset with the business model, and the game suffered in terms both critical and public perception.
It’s unfortunate because Diablo III is a darned fine game, and the more user-friendly PlayStation 3 version will hopefully restore some faith in the franchise by those more upset with Blizzard than the actual Diablo franchise. It gets rid of the always-online requirement for single player…. and in fact, multiplayer as well. Yep, local co-op is the real highlight of this package, and even though it gets busy with people running around the screen, a quality interface and marker system makes sure that no one loses their place in the heat of the action. 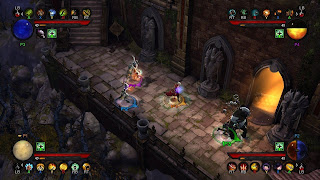 While the co-op also happens to be the kind of fun that you’ll laugh along with, the rich Gothic atmosphere is a little lost when playing this way, but then that’s why the single player game exists. Diablo III’s vision of horror is pulp in the extreme, but it’s also quite compelling for fans of classic RPGs.
With the outdoor environments melding beautifully with the catacombs I was reminded strongly of a classic Dungeons & Dragons adventure; Expedition to Castle Ravenloft. That too was generic pulp fantasy, but because it was so unapologetic in its vision it’s like those dodgy barbarian films from the 80’s where the villain is invariably killed via a thrown sword through the chest; its pure, unapologetic, guilty entertainment.
Not that Diablo III will give you the time to sit back and think about the merits of the narrative and the atmosphere. From start to finish this game lays on the action thick, with hordes of enemies offering some devious tricks. See, where Diablo succeeds and lesser games fails is that Blizzard understands that quantity doesn’t necessarily mean challenge. When you have different enemies, each packing their own unique strengths that often complement one another to conceal the weaknesses, charging at you at speed, then it doesn’t matter that other games feature larger hordes; this game has interesting combinations, and that makes running into a new horde both a cause of apprehension and excitement. 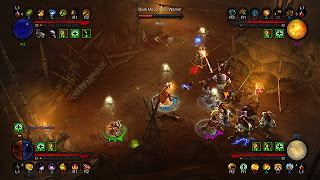 It must be said that the skills and inventory interface is a little less clean as it could have been. For instance – it took me a little while to realise that that tiny number at the bottom of the screen was the amount of money I’d get for selling an item at a shop. And though the controls are mapped well to the PlayStation DualShock, it must be said that aiming, even with the auto-aim being very generous, makes it a little too difficult to pick up individual enemies in those hordes. That hurts the strategic merit of the game, and makes the harder difficulty levels a little harder than they needed to be.
That quibble aside, this is a masterful port of a masterful game. It might well not be the perfect top-down clickathon that the world was hoping for when it was finally released after years in development, but it’s a fine entry with superb multiplayer credentials and deserves props for nailing one of the most addictive formulas out there.