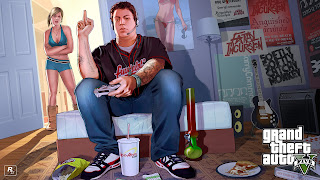 It’s almost predictable now. Big budget game gets released, draws some criticism by a critic (wow, critics being critical! WHAT IS THE WORLD COMING TO?), and BAM! Because someone dared to say something mean about their favourite game, a bunch of entitled and less-than-rational people take advantage of that anonymity of the Internet to embark on a truly nasty campaign to prove to the world that, yep, games shouldn’t be taken seriously by any functional member of society. Not with that kind of community being the vocal representative of game players.

This time around it’s GTA V. It’s a misogynistic game from a misogynistic series. Seriously, it’s misogynistic. You can debate whether the misogyny is the ironic kind to criticise social attitudes, but you can’t really debate that it exists within the series.

A critic called the game out for being a work of misogyny. Gamers proceed to create a petition to demand the woman that wrote that piece of criticism be fired. That petition seems to have been subsequently taken down, perhaps on account of it being the very definition of frivolous and an insult to the very real and important petitions that existed next to it on Change.org, but here’s a story that was written around that petition.

And let’s go have a look in the comments that this story generated, shall we?

the only thing I find confusing about this is referring to it as “her” …that clearly used to be a dude. I honestly can’t put any merit into a man trying to be a womans opinon…clearly he/she has issues to begin with.

if i was a woman and that ugly id be a feminist also.

And more, but I don’t really want to give these people more of my Web space.

I’ve already written about how this reaction to a critical review of a game is not a justified response. If you children and manchildren want games to be taken seriously, both as art and entertainment, grow the hell up and engage in these discussions on a halfway intelligent level.

Calling for a critic to be fired because you’re too stupid to understand the words she’s written, or questioning her very gender, makes you useless to the industry and the discussions within it.

Don’t like the critical reaction to a game? That’s fine too. I didn’t like how many critics responded to Killer is Dead. This is how you respond in a way that’s constructive and respectful to the industry and a critic’s right (and job) to hold an opinion.