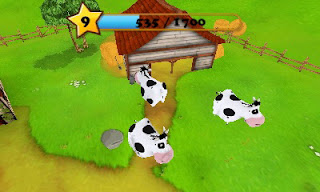 I’m a big fan of farming games. I devour every Harvest Moon game that gets released on any platform, and I’ve even had fun with the serious Farming Simulator series. There’s something cathartic about sitting down to one of these games knowing that all you’re going to be doing is dropping water of virtual plants and feeding polygonal ducks and cows.

I even liked Funky Barn, despite the name. It takes something impressive for a farming game to annoy me, and in that context My Farm 3D is an impressive game. Not only does it fail to be even remotely entertaining or relaxing, it barely manages to be interactive.

Players start out with a basic farm layout. there’s nothing on it aside from a single chicken. Said chicken eventually lays eggs if fed and kept happy (clean), and then those eggs can be sold, and the money used to buy more chickens, and then ducks, and then pigs, cows and horses. 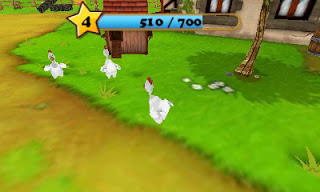 As the farm grows you’ll also need to buy buildings otherwise the animals will run away, keep the food stocks up, and buy the occasional dose of medicine because quite frequently the animals will get sick for no apparent reason.

The only other thing you’ll need to do is keep the farm itself clean from dirt splotches. All of this is presented through that 3DS 3D screen which is put to spectacularly uninspiring use. None of the animals have any personality – they literally just wander back and forth using a handful of canned animations, and they’re not especially attractive, either. It’s almost like the developers set themselves a challenge to make farm animals out of the lowest number of polygons imaginable.

Oh, and as an aside the game is filled with graphical glitches too, with weird animations for some of the animals (especially the ducks), and all kinds of clipping issues. My Farm 3D is a spectacularly ugly visual package.

That’s about all there is to the game. A Farmville-style points system provides players with levels as they gain experience (for cleaning animals, or when they produce goods to sell), but this system serves no purpose whatsoever other than to have an occasional arbitrary “you’ve levelled up” message. Aside from that you’re just going to sit there watching ugly ducks wander around and do nothing.

This is not how farming games should be made.