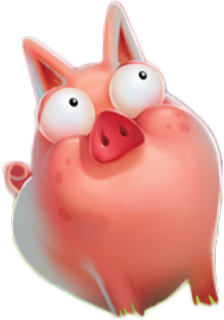 One of the things I love most about a new console is playing games that I would not normally touch.

Because I want to play games on the console, but because there are not all that many games available on it, I find my eye being caught by games I would simply bypass with the other consoles. Funky Barn is one such game, and boy am I glad I picked it up on impulse.

It’s essentially a very light-hearted simulation game, with a dash of humour and a touch of arcade-style pacing. The idea is unsurprisingly to build up a farm, starting out with just the one chick and a couple of dollars in cash. With that money you’ll build shelters, food and water troughs and do some landscaping to make the chick happy. It soon grows into a chicken, lays down some eggs, and once you start selling those, you’re off and away.

A couple of hours later and you’re managing sheep, cows, geese, pigs and alpacas (not nearly enough alpacas in games), as well as a handful of plant crops. Animals produce goods at such a rapid clip that it would be impossible to keep up if it was not for the ability to also build machines that automate the process of collecting the produce and selling it on your behalf. With a bit of skill it’s possible to get the farm to the point where everything is running on automation – and then it’s time to sit back and simply enjoy the animals running around and generally being cute. 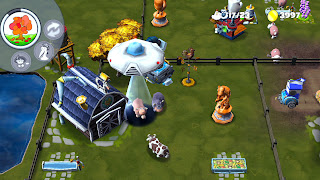 Or that would be the case if the chickens were not susceptible to fox attacks, if cows were not in danger of alien abduction and your other pets were not in danger of drowning themselves in the nearby lake. The animals are genuinely stupid and vulnerable, and so it’s important to keep a close eye on everything that’s going on around you. And then, just like an earthquake in a Sim City game, a storm can hit the farm causing a lot of very expensive damage and a good half hour of panicked repair work.

This is not necessarily a criticism. The arcade-style babying of the animals is essentially the point of Funky Barn. Because the game presents this feature, usually so irritating in games, with a healthy sense of humour and charm, it pulls it off as frivolous and irrelevant fun. Nothing deep or insightful, just clean fun. For obvious reasons, then, this game is pitched at the young and young-at-heart.

Occasionally you’ll be set with a ‘mission’ to produce a certain quantity of a certain good within a time limit, but these are completely optional and don’t result in enough rewards to really bother with them. So, once the farm is ticking along nicely by itself for the most part the only thing left to do is landscape it and enjoy the pretty cartoon vibe. The Wii U GamePad makes it easy to place objects around the place and can also be used to pet your animals – a feature that has little in-game impact (it makes the animals temporarily happier), but is adorable. 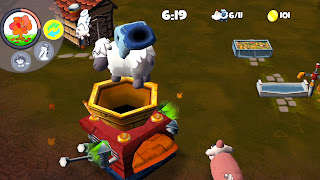 There’s not a whole lot more to the game. There’s only three levels to play on, and then three challenge levels. I’m rather surprised this was not an eShop download because it would have been a more natural fit there. But each farm takes a couple of solid hours to build up, and it’s a great deal of very innocent fun from start to finish.

Pick this one up while the Wii U is new and before more games start hitting the market, because as enjoyable as this is, this is one game that you’re not likely to bother with once your Wii U library starts to grow.

– MattS
Find me on Twitter: @DigitallyDownld
Find me on MiiVerse: WaltzIT