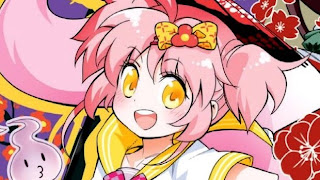 Just as the PlayStation 3 tends to snatch up JRPGs, the Xbox 360 has been the home of the bullet-hell shooter this generation. With that in mind, it’s remarkable that the former mouthful known in Japan as Mamoru-kun wa Norowarete Shimatta!: Meikai Katsugeki Wide Han was able to make it to the PS3, let alone see a localised release elsewhere with its otaku charm intact. Thankfully, it has been rechristened as the decidedly less verbose (albeit still inelegantly titled) Mamorukun Curse.
More stunning than any of that is the overall excellence of the release. In some parallel universe where obscure Japanese titles had influence over foreign markets, Mamorukun Curse would be the title to rekindle interest in console-based 2D shooters. Regrettably, it will be lost on most thanks to its genre and brand of charm.
For one thing, the game is not simply chock full of adolescent female protagonists (as is standard for the genre), but nearly every aspect of the presentation is cutesy to the point that many will inevitably perceive it as vexing. Fan service permeates throughout the experience as well, with some risqué unlockable gallery images cropping up occasionally. It’s nothing too racy but will be dismal for some. 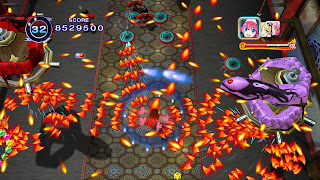 I personally dig the game’s colourful worlds and enemy designs. In fact, Mamorukun Curse has one of the most exquisite soundtracks I’ve ever heard from the genre thanks to its cheerful, retro-infused melodies reminiscent of some amalgamation of the Super Nintendo and PlayStation. If you’re not fond of unrestrained bliss leaking out of your video games, this one is best left avoided.
Explicit charm aside, Mamorukun Curse does an unexpectedly stellar job of easing newcomers into the genre via multiple difficulty levels. It gets deeper than that though – the game operates unlike most other titles in that the player progresses the action rather than being at the mercy of some omnipotent, ever-scrolling screen. While you can’t retrace your steps past a certain point, this still opens up countless tactical manoeuvres since players can operate at their own pace rather than feeling overwhelmed by a constant barrage of enemies. The game cleverly prevents abuse of this with a fairly lenient but ever-present time limit. It’s also worth noting that when the action gets too intense, the game will shift into a slow-motion mode so that players can actually comprehend the on-screen action.
Hardcore fans of the genre will still get their fair dose of depth as well. While core gameplay involves dodging immense barrages of bullets and returning fire, the titular curse mechanic allows for amplified strategies. Depending on how the player utilizes the curse, it can trigger a character’s super mode or inflict slower, draining damage on a tough foe. 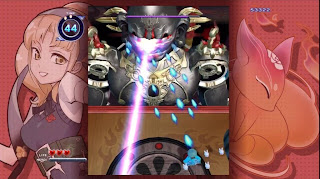 The latter option ramps up the challenge by inducing more potent firearms, but this comes with the side effect of them offering more points. Not unlike New Super Mario Bros. 2 and its coins, these points are tracked in an overarching manner, with your goal being to nab a million. I would argue the approach has greater effectiveness here too, since the player will meet with failure more than a handful of times. Thus, even a failed attempt at a level becomes a valid use of the player’s time since they are both learning and being compensated for it.
Mamorukun Curse is simply a polished experience overall. The level designs are conspicuously varied and some even incorporate the timed dodging of obstacles – a design choice scarcely attempted in the genre. That’s more than likely a testament to the experimentation of the developers, as these segments wouldn’t function remotely as well in an auto-scroll environment. Beyond that, the character roster should be lauded for being plentiful and each one bearing an individualised bullet pattern.
Objective “issues” with Mamorukun Curse do exist, but I found virtually all of them to be disposable. The most overt of them is the presence of borders around the central action on the screen (remnants of the game’s lineage as an arcade title). When playing the modes that mandate borders, you’re essentially looking at about a third of the screen. With that said, it’s never remotely as obnoxious as shooters such as Chopper I since the characters and bullets are all reasonably sized. I’d argue that the borders don’t even hamper the experience but rather the overall consistency as there is only one that can be played in full-screen mode. 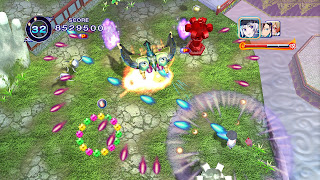 Beyond that, some will harp on the game for only including around five levels. Another legitimate concern, certainly, but the game does a terrific job of masking this via copious amounts of modes, difficulties, characters, and challenges. I’m typically adverse to the approach of dumping superfluous content atop a bare game for the sake of artificially creating replay value, but Mamorukun Curse bucks this trend by providing an addictive core experience and including bonuses that play to the strengths of the genre. I felt genuinely compelled to play through the game with every single character and fiddle with the difficulty settings since, unlike similar titles, they actually seem to affect the layout.
Mamorukun Curse is as inviting as it is divisive but has the quality to back it up. Though some will be opposed to its visual and auditory style, the game is one of the better starting points for those looking into the genre and veterans will appreciate the ways it strays from the typical formula. At the very least, it’s the PS3’s definitive bullet-hell shooter and one of this author’s favourite games released this year.