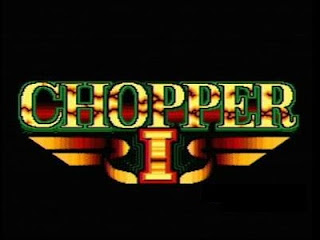 Ah, arcade shooters. Who doesn’t love the feel of dodging devious bullet patterns and firing streams of bullets whilst reliving the ‘80s? Alas, not all games of the era were able to recreate this thrill successfully. With a title like Chopper I, it seems the developers were more focused on draining your wallet of quarters than providing a rewarding experience.
Chopper still plays like most arcade shooters of the time. The screen automatically scrolls forward while you fire projectiles and manoeuvre your titular chopper to victory. Along the way, you can pick up some power-ups to increase your damage or the amount of ammunition you dish out. You’ve also got a special attack that clears the screen of enemies and bullets. At the end lies a boss battle. There are some attempts to change things up (such as the use of nets that prevent you from shooting correctly until you get them off), but overall, this is simple stuff. That’s perfectly fine, since the basic approach has proven to be an unyielding formula for a high-quality shooter.
Chopper I’s issues lie within the level design itself, though. Regrettably, they arrive as soon as you reach the second stage. Having to control a helicopter within a confined space is one thing, but when enemies and their projectiles are permitted to pass through solid objects, it becomes a bit biased. Thus, your only recourse is to memorize when and where the foes will show up. Your special attack can keep them at bay, but it has limitations.
From this point on, you’re introduced to an assortment of cheap tactics such as being attacked by off-screen adversaries. Every time you die, you respawn at the beginning of the stage or near a checkpoint rather than continue off from the point where you met your maker. Sometimes the “PLAYER-1 READY” message that appears upon returning actually blocks your view of incoming enemy projectiles and leaves you open to quick deaths. Considering you die with one hit, instant regeneration would have gone a long way toward making this more playable. 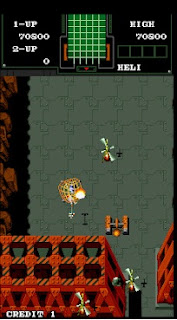 The boss stages don’t get any kinder. In addition to withstanding a ton of abuse, each one takes advantage of the sheer amount of space they occupy whilst ensuring they fire a barrage of bullets in every direction. That would be fine if your helicopter was speedier or could endure more than one hit, but the patterns you’re expected to dodge leave little to no room for your unfortunately shaped vehicle to navigate through. On top of that, some of the checkpoints right before boss battles put you in precarious positions where you become doomed to use a special attack (vital for wearing down the boss) or unable to advance due to downright preposterous enemy positioning.

Since Chopper is a port of an arcade game, it’s awkward to squish all that vertical goodness onto the PSP’s screen. Thus, about 1/3 of the screen is taken up and the rest is a border. SNK’s other arcade games were fine with being of the vertical variety, but this one would certainly benefit from a wider viewing range. It’s also a shame that you can’t see things like your amount of credits inserted, high score, story sequences, and other details since the arcade screen is too long to be contained on the PSP. You can extend the game’s emulated screen to display all the information, but it’s effectively suicide since the viewing area shrinks horizontally in the process.
The game isn’t too stable either. Aside from occasional slowdown due to the amount of sprites on the screen, there are moments where things just stop altogether for a few seconds. Additionally, whether or not you reach a checkpoint is inconsistent. You can make it reasonably far into the level and have to start from the beginning or die two times consecutively at the beginning of a level and then respawn in a totally different area. Being able to just play the whole level through without being forced to skip ahead is tough.
It might seem like I’m yammering on about the difficulty too much, but that word can be used to summarize Chopper I in its entirety. If you can look past it, you’ll find uninspired visual design and a decent soundtrack that is overshadowed by the endless sound of gunfire. Without the absurd challenge level, this would be a something of a middling title.
Still, for some inexplicable reason, the sadistic stages can be engaging and, however rarely, fun. You’ll find yourself slighted in situations where you should have come out on top, which then fuels some sort of inner desire and gets the adrenaline pumping.
You’ll be discouraged as anything, but it’s always just enough that you feel the need to keep playing and prove the game wrong. Since you have infinite credits, there’s no real reason to stop. You’re not in an arcade dipping into next month’s rent anymore; it’s just a three dollar downloadable game. While I am wary of saying I was entertained the entire time, I was certainly glued to the screen for multiple hours.
A good challenge is always welcome, but Chopper I largely feels abusive in its approach. Unless you’re a retro fan starved for shooters, you’ll want to consider SNK’s other offerings first. 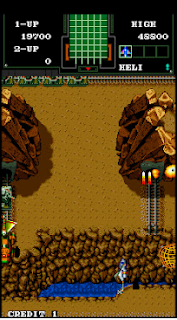 While we typically only review a game on one system due to their similarities, Chopper is a special case.
For one thing, the increased viewing space on a TV makes it infinitely easier to pay attention to the action. It also seems to run more fluidly, with a speedier copter at your command and less noticeable slowdown overall. The game’s artificial difficulty even becomes forgivable…to some degree. Yes, Chopper I is still undeniably “cheap”, but it becomes fuelled by authentic amusement rather than mere refusal to give into despair.
For comparison’s sake, it took me over an hour and a half to make it to the game’s fourth stage on the PSP, yet only 10 minutes on the big screen. The fourth stage’s boss originally took me over 30 minutes on the PSP, but the PS3 let me dispose of him on my first try (despite using the same generally failing tactic).
While Chopper I is still not the world’s most technically sound shoot-‘em-up, it’s a respectable effort nonetheless. It’s also very affordable at $2.99 USD. If you’re feeling bold enough, consider giving this one a look.
– Clark A