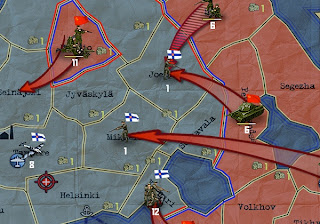 When it rains, it pours. The App Store has gone from having precious few strategy games to really enthralling players by offering plenty in just the span of a few months. Battle of the Bulge. Legion. And now Strategy & Tactics: World War II.

This game strikes me as a title that the developers really wanted to be a grand strategy wargame. The map, the mission structure and the basic way in which the units work all look and feel like something from a developer like Paradox Interactive. Squint and it looks like a Hearts of Iron title.

And that’s because the game was originally intended to be a Hearts of Iron game. I don’t know the ins and outs of what happened behind the scenes, but somewhere along the line this game went from being a licensed game to being a Herocraft original IP. It doesn’t really matter in terms of the end product, but it’s an interesting background and it’s good to know the perspective this game came from. 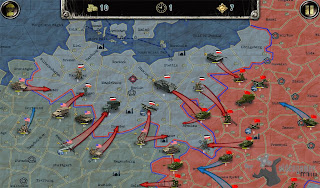 There’s a genuine effort to slip some strategic depth into the game, for instance. Each mission features strict conditions with which to achieve the highest possible medal, and hitting those targets requires players really understand the way the units work and how to maximise their army’s resources. There’s secondary objectives too which are there to really challenge players – achieving those is usually a question of beating significant odds, whether that be time or an overwhelming enemy force. Needless to say, achieving those secondary objectives is what gives this game value for strategy veterans.

Between missions players can spend points on science upgrades that allows them to tweak their army’s performance. Picking the right science upgrades for your personal play style is another layer of depth while a simple but effective map makes the game attractive to play, and when units are given orders, their movements are represented by arrows. Arrows! Every hardcore strategy gamer loves arrows (as the developers seemed to realise – the promo screenshots are filled with arrows). 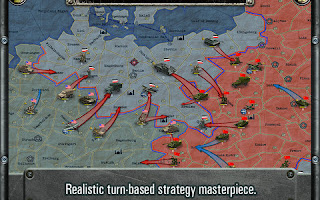 In execution though the game is closer to a simple board game than anything grand. Combat is a matter of basic maths – he who has more will probably win. There’s no real provision for supply lines and reinforcements are abstracted down to a single resource. There is no political system in place. Doing well at Strategy & Tactics, then, is a simple matter of understanding basic board game strategies.

This isn’t really a problem. In fact, because missions are so short and suited for playing in front of the Television or on the TV, it’s nice to have a casual strategy game that at least looks like it’s a little more. And the developers are generous with content – there are great multiplayer modes, plenty of campaigns for solo play, and a very generous ‘demo’ to try before you buy. There’s the hint of more to come, too.

But with all due respect for the admirable effort that Herocraft put in here, I do so desperately hope that Paradox Interactive will finally get off their backsides and produce a Hearts of Iron game for the iPad, as I would love a genuinely deep strategy game sitting on the device. As long as developers believe that there is a better market for light and breezy strategy titles than in servicing the hardcore strategy nuts we will continue to see games like Strategy & Tactics. Though it is disappointing that the game’s arrows don’t quite point in the direction I would like, as far as these casual strategy games go, this is one of the better examples.