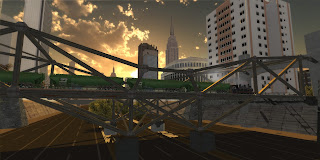 At first glance, Bridge Project would be easy for most players to dismiss. It doesn’t have the words ‘Super’ or ‘Legend’ in the title nor does it have anything to do with aliens or Russian terrorists. It’s a very niche title that only appeals to a very specific audience and playing it made me realise; this is probably the best example of judging a book by its cover because it is as niche as it looks.

The concept is simple: build a stable bridge that will successfully withhold large quantities of weight. Connecting platforms to balance the weight and avoiding stress is the key solution to completing a level. A green bar will appear when you connect a piece together efficiently whereas a red bar will appear if it’s placed inefficiently. This indicator is helpful when constructing a strategy. 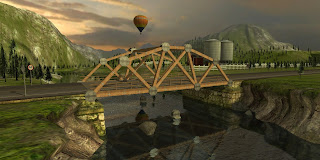 When players are convinced that their bridge is ready, there is a play button to enable traffic and natural occurrences to test your construction. The feeling of seeing your bridge stand on its own only to be demolished by three large buses is one of the most amusing, yet most humiliating things I’ve ever done in a video game. Unfortunately, that enjoyment wears thin quickly due to a lack of a sense of progression. I’m not a fan of bridges (yeah right, you’ve got entire Flickr accounts dedicated to photos of bridges, I’ve seen them – ed) nor are puzzles my guilty pleasure, yet that’s what Bridge Project ultimately feels like. A poorly explained bridge building puzzler that has little effort of teaching the player.

Bridge Project does support a free create mode that, in its entirety, feels shallow and provides little to no replay value. The customisation options are limited since buildings cannot be placed in the background of the scenery and neither can anything be built in the main playfield beyond bridges. Players have minimal control over how much traffic will appear, can raise terrain and can change the background theme, but that’s about it. 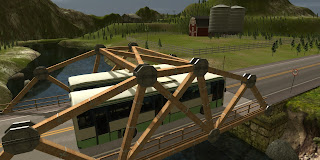 Visually, it’s nothing groundbreaking, but the low detail and bright lighting boasts a very attractive aesthetic that is also complimented by a relaxing soundtrack. In no way does either aspect save the overall experience but it does aid in making playing this ultimately shallow, brief puzzler appealing to the small niche that will get into it.

Other than leaderboards, there is no reason to come back to Bridge Project especially after the main levels and bridge creator are done with, both of which are lacking to begin with. As niche as this title is – when considering the limited resources to take advantage of – you have to give credit to such an obscure approach. If you’re a bridge fanatic or have money to burn, Bridge Project is for you.