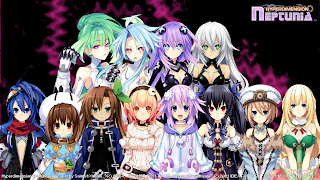 Today’s announcement that not one, but three Hyperdimension games are headed to the PlayStation Vita (no word on a Western localisation, but surely…) is further evidence that the Vita is just now hitting its stride.

Though the console never really took off in the west, the PSP was a big seller in Japan. Why was that? Very, very simple, the PSP specialised in offering a wide range of very niche JRPGs and the broad category of “utterly weird Japanese games” that meant the console was like the Xbox 360 with shooters and western games.

Despite the slow start for the Vita in Japan, the signs are there that it’s on the up. For the first time it topped the Japanese hardware sales charts after a price cut, and I don’t think it’s coincidental that we’re getting announcements like those from Compile Hearts and GUST (Atelier Meruru port, for instance). Soul Sacrifice is the Vita’s answer to Monster Hunter, and is possibly the console’s first “system seller” in Japan.

With this additional sales push in Japan, the Vita install base for Japanese developers is going to start looking more attractive, and Sony has the existing relationship with many of them thanks to the success of the PSP in the market.

The Vita’s future in the west is still far from certain (though I certainly have a lot of hope pinned on the release of Killzone), but in the last couple of weeks we’ve seen Sony make all the right decisions for the console in Japan, and the developers that will ultimately decide the Vita’s success in the market are responding.

And having Hyperdimension and Atelier in my pocket would just about make the console the best thing ever from my perspective. Get busy with those localisations, Nippon Ichi.