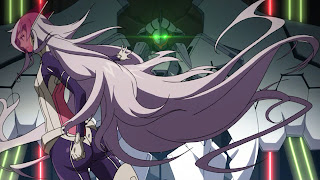 Goichi Suda has always been a difficult game developer to review. Do we, as critics, reward his ambition, or focus on the inevitable gameplay flaws that work into his games?

For me personally, it’s somewhere in between. With some games, such as Lollipop Chainsaw, I consider the message that the game is making important and engaging enough to forgive its relative brevity and other slight flaws in its gameplay. With Liberation Maiden it’s more difficult to resolve the faults.

Liberation Maiden’s characters are not as endearing as most of Suda’s work, and that’s a problem. The idea that a 17-year old girl becomes a president and has to personally fend of an invading army is a good one and ripe for anime-style plot heroics, but beneath that nice concept there isn’t actually a plot. There’s a couple of missions, with a brief dialogue intro to each. And that’s it. 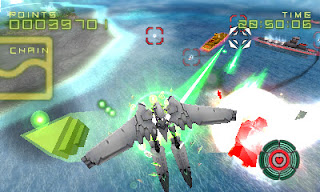 Emphasis has to be made on the “couple of missions,” too. There really is only a handful of levels and these are over in just a couple of minutes. The iPad version extends that length somewhat with challenges that players can set their friends and achievements, but it still doesn’t hide the fact the game is underdeveloped and most people will be done with it in less than an hour.

What little content there is is good fun, and well suited for the iPad touch screen. This is a fast-paced action game, but because players swipe on the screen to aim and launch weapons, it’s a game that doesn’t need buttons. As such I had no trouble taking down legions of enemies at once. Liberation Maiden’s real quirk is that the player’s attack and defense resource is drawn from the same pool. That is, if the player does too much attacking, then madame president is going to be in for a world of pain when the enemy attacks back. Measuring the desire to swipe everything into oblivion with the need to actually finish the mission makes for an interesting dynamic. 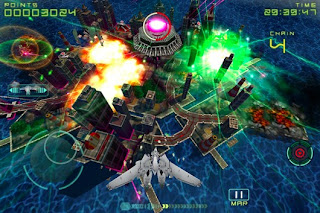 It’s also not an easy game. Though each level is over in just a few short minutes, up the difficulty level and the challenge becomes not unlike a bullet hell shooter and players will need extreme patience to memorise the enemy patterns and analyse the best route through the levels. Because the game itself is hard to connect with, it’s hard to appreciate the challenge enough to really stick at it, but more old school gamers will appreciate the game a little more for it.

On the iPad’s nice big screen it’s substantially easier to see everything going on than it is on the 3DS’s small screen, and though the Retina display can’t display stuff in HD, this version of Liberation Maiden is the aesthetically superior one. Explosions have greater impact, it’s possible to make out smaller features on the surprisingly-detailed enemies, and it’s nice being able to play a game that models itself on the bullet hell genre and actually be able to see what’s shooting at you.

I’m still not sold on Liberation Maiden, but I’ve now enjoyed my time with it twice. My disappointment has more to do with wanting more than regretting playing what I did, and considering the iPad version has a lower price point than the 3DS game, this version is far more palatable.

The Vita is picking up where the PSP left off; it’s all up from here