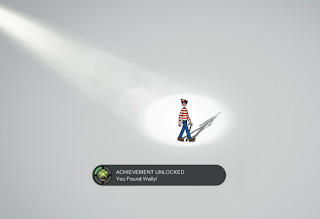 As critics, we should ideally be looking inwards at ourselves constantly – looking to redefine ourselves and questioning why we are writing our reviews the way that we are. That’s how we improve our craft and, in turn, provide our readers with better information.

So in a bit of personal reflection I’ve recently looked back at some of the games that I’ve given positive reviews to this year. Games such as Tomb Raider (well, I didn’t review it, but I agree completely with Sam and Jason’s assessments of it), Ni No Kuni, Dead Space 3. In looking at my organised thoughts on these games something stood out to me. Each of these games have held my hand through the entire experience – and in none of them did I complain about it.

Ni No Kuni, for instance, marks every single point of interest or objective on the map. I know exactly where I need to go next and what I need to do next by simply opening up that map and looking for the glowing points. In every other way the game is a glorious throwback to the 2D sprite-based RPGs of Square Enix in the SNES era – flight and ships and large overworld maps and everything – but aside from a few secrets that feel like they were thrown in for the sake of giving really dedicated players something to write an FAQ about, it’s impossible to get lost in Ni No Kuni.

Players are also literally told what to do next by a helpful little guide in Mr. Drippy. He’s handy because, again, I never got lost, never faced a battle where I didn’t know the enemy’s weaknesses, and I was never at a loss to figure out which skill I needed to use next to work through the environmental puzzles. It’s all written into the script so masterfully that it doesn’t really feel forced, but rather it’s merely surprising that this game goes to such great lengths to pull players along by the rope and that I didn’t actually care. I rather like exploring games for myself.

I’m not the only one that overlooked this hand holding in favour of the game’s broader picture – and Ni No Kuni is still an incredible game even if you take the hand holding as a criticism. Indeed, Ni No Kuni’s marker system and other games that gently guide players through all of their challenges are often lauded for taking the potential for human error away from them. Tomb Raider’s survival instinct feature that highlights any important features of the environment that players might miss. Dead Space’s 3 button to highlight the exact path to the next objective to make sure players don’t get lost. I’m playing Sly Raccoon 4 right now, and it highlights every object that I can jump on to. These features have been celebrated in the press as streamlining games, saving people from getting frustratingly lost and so forth.

On the one hand yes, these hand holding features in games do make them more accessible, and yes, it’s hard to get frustrated or lost when you know exactly where you need to head next. But by the same token these features (and others, such as checkpointing) also serve to cut big chunks out of games as logical puzzles.

In the good ‘ol days (to get a little nostalgic on you), a game would only give you a vague sense of what you needed to do next. In an RPG you might be told that there’s a town to the east that has a special key. Well, finding that town and surviving the random encounters until you do became part of the experience. There was a sense of exploration and adventure to those games which engaged certain parts of the brain that modern games don’t. I’m not saying that it was necessarily conscious thought, but some people would decide to go north to try and walk around some mountains in their quest for the eastern town, while others would brave the swamp next to those mountains, knowing full well that the enemies in there might have poison attacks with the nearest healer an uncertain distance away.

Yes there was the potential for people to get hopelessly stuck and want to give up on the game, but for those people there was a ready solution in GameFAQs. For everyone else, the sense of achievement for finally finding that town in the east, or the sense of anticipation that came with running low on health in a shooter like Doom with too many different paths to head down was a big part of the game experience. Even the original Tomb Raider games were in some ways more rewarding than this reboot – finally figuring out an environmental puzzle without having Lara talk herself (and you, the player) through it and without being able to highlight the important things you needed to do make getting through those Tomb Raider games a reward in itself.

I’m not here saying that modern games are necessarily easier. Turn the difficulty to its highest setting and you’ll still be reloading plenty of games plenty often. It’s just that games are becoming undeniably more straightforward and linear in terms of the thinking that players need to go through to arrive at the game’s end. What interests me about all this is that critics (including myself) don’t seem to care about this development; or if they do more often than not it’s considered an improvement. In fact, the majority of people that play these games don’t care either.

Look at the Metacritic rating for the likes of Tomb Raider and Ni No Kuni – it’s huge. Have a look at some of the discussion threads around these games – those few that don’t like the games are dismissed, if not derided by the masses.

This interests me because it means two things – 1) the masses approve of this simplification and 2) it’s tacit approval for developers to keep doing things this way. Longer term we’re going to see fewer and fewer games require logical thinking on behalf of the players. Outside of the realm of indie development games are going to be spoon fed to us, and we’re going to love them for it.