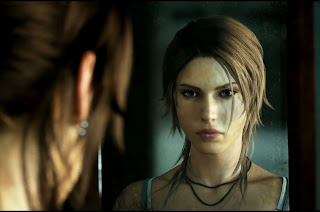 Tomb Raider is the latest video game reboot to try and create a brand new series for a franchise. Lara Croft returns this time as a young, naive explorer who struggles to survive in what is established to be her first big adventure.

After setting off to try and find the lost kingdom of Yamatai, Lara’s ship is pulled into a storm along with the rest of the crew, who end up shipwrecked on an island located within the Dragon’s Triangle. Upon waking up, Lara is taken hostage by the inhabitants of the island who worship the sun queen of Yamatai, Himiko.

The first few hours of the game definitely pushes you to connect with Lara. Isolated with an almost constant fear of death in a new environment creates a struggle which is evoked marvelously through the attention to detail in Lara’s animation and voice acting. Lara’s actor has done an amazing job of capturing the pain and struggle that Lara endures. There were times I genuinely felt pain for the pain Lara was feeling when she was snagged by a bear trap or impaled by a spear. 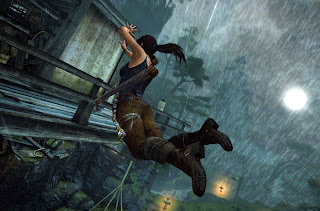 The best thing about this reboot is that it doesn’t attempt to completely throw out what Lara Croft eventually becomes. Rather, this reboot shows her beginnings, showing her fears the player is fearful with her. There’s a great sense of vulnerability that is depicted at the start of the game. Tomb Raider grabs this vulnerability with both hands and uses it to slowly start to build up the player’s confidence of what Lara can achieve, only to snatch it back the moment you feel safe. This is only furthered by the way the player is always with Lara. Once you’ve started the game there isn’t a single loading screen. Although the loading is masked by a slow walking sequence most of the time even this is used to good effect, as you have a foreboding feeling of whats around the corner, rather than thinking it’s filler to, well, hide a loading screen.

The same vulnerability is shown in the ways Lara fights for survival. Her first kill is not an enemy or monster; it’s a deer. Lara’s emotions are at a peak following that kill, which are multiplied when she later has to take the life of another human being. Never mind that the first human Lara kills is one trying to rape her, she is visibly in emotional pain with what she needs to do to survive. The emotional impact that this character creates within the player is truly remarkable. Sadly the rest of the cast are made up of the cliche character types found in most stories and aren’t that memorable. Though there are some nice moments between Lara and some of the others I found greater enjoyment in the development of Lara than anyone else. 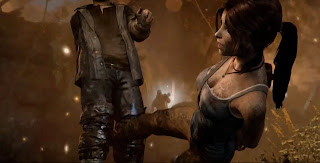 In fact, there is a great sense development of Lara’s character in all aspects of the gameplay. Initially, her only means of fending for survival is using a bow that she took of a dead body. At her disposal later on are also a handgun, shotgun and a rifle. The main problem I have with the introduction of weapons is not how she acquired them, with makes contextual sense, but rather how they’re used. The handgun is stolen in order to survive in the night after being captured again. The shotgun is stolen from a man she just blew up to save her skin. Yet, once Lara has the weapons ammo is lying around everywhere and there are no real repercussion with death; it’s a standard back-to-checkpoint restart. While this doesn’t draw me away from the emotional themes that Lara carries throughout the game, the development into a gunslinger just seems to be a little too quick.

That being said, the combat is superb. Guns have a great feel to them, though that can’t be said for the bow. It doesn’t feel real, as there isn’t a sense of realistic aiming or firing. Lara can fire arrows off like a machine gun with no loss of power. That being said I did use the bow the most, mostly because it brings with it the option for stealth kills. Enemies are constantly on the lookout, and if they see one of their men go down they’ll come running after you. Being stealthy not only helps avoid big gunfights, but also listen into the enemy conversations, which helps prevent these enemies from feeling too much like fodder. The game’s cover system is automatic and is the best I have ever seen in a game. Walk to a wall and if needed, Lara will crouch behind it. It’s that simple and it works. 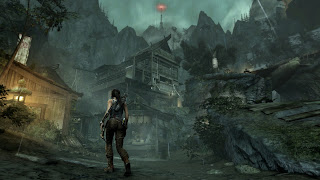 Along with the combat is the climbing and exploration throughout the entire island. Lara can jump all over the place, climb up rock walls thanks to her climbing axe and use rope arrows to form zip lines over large gaps. There is enough diversity throughout the game to not get bored of exploring, and there are some heart-pumping moments when you’re running away from burning buildings, collapsing walkways and a runaway plane.

There is a lesser reliance on tombs and puzzles, which were previously the hallmarks of the Tomb Raider games, and this is quite disappointing. All tombs are optional and the only reward they provide is a map of the area which allows you to find other collectibles and for completionists, you can go back after the credits have rolled to collect everything that you missed the first time. There isn’t a great deal of brain work needed to complete these tombs, rather most of it comes down to timing switches and the like. If that isn’t easy enough Lara has a ‘Survival Instinct’ ability that highlights important objects in the environment. It would’ve been nice if there was a little more emphasis on puzzles in the actual campaign, but that’s just me nitpicking. 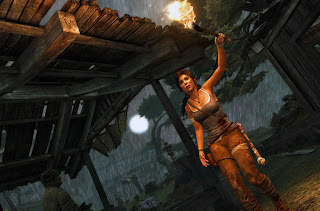 As Lara makes her way through the island, she picks up skill points and salvage which can be used in upgrades. Skill points can enhance her combat and discovery abilities, whilst salvage is dedicated to upgrading weapons. What’s great about the customisation is you are not forced to upgrade all your weapons, so if you find something you like you can complete it fairly early in the game. I couldn’t look past the exploding napalm arrows though.

The multiplayer is by far the weakest part of the whole game. The combat is once again really fluid, and even though there is a dedicated crouch button I rarely found the need to use it thanks to the auto-cover system. You have your stock standard deathmatch, as well as some new modes that mostly follow the same requirements of collecting something without dying. My biggest gripes were how unbalanced the game can become. In all of the multiplayer games I played, once a team gets an advantage it is pretty hard to lose it. Players can camp outside of the enemies spawn point and just shoot them down as quickly as they appear. There is a perks system and upgrades to your loadout similar to the single player but I don’t think it will be as gripping as other multiplayer games.

Tomb Raider is an amazing game. It is a perfect way for the series to be re-introduced to gamers, as it depicts a very likable heroine who truly struggles to survive, emotionally and physically. The overall experience wanted me to jump straight back into the campaign the moment it ended. Lara is back!