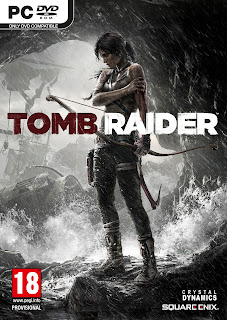 Lara Croft’s reinvention has its problems, but does so much right that you’ll probably forget all about them.

As someone who’s never played a Tomb Raider title (yes, really), I didn’t have any apprehension going into Square Enix and Crystal Dynamics’ reboot of the famous Lara Croft. Much like with Devil May Cry, which was also recently restarted, I never had any interest in the original games in the Tomb Raider series or the main character.

Lara herself always seemed a little goofy to me, with her short-shorts and tank top. And with that in mind, I’m very happy to report that the ‘new’ Lara is anything but goofy.

A young adventurer looking to make her mark in the world of archeology and fortune hunting, Lara puts together a crew of some of the best seamen and scientific minds she can find. Her goal is to find the legendary kingdom of Yamatai in the far east. Yamatai is no ordinary ancient site though, it’s a place akin to Atlantis according to one of the characters in the game and was ruled by the shamanic queen Himiko.

One of the coolest things about the lore behind the main storyline is that it’s historically accurate (well, pretty much anyway). Much like the Indiana Jones movies and (to a lesser extent) the Nathan Drake games from Naughty Dog, all of the historical elements in Tomb Raider (TR) are at least based in fact. Of course, even though things start out rooted in history, they twist and turn quite a bit as the story progresses. Early on you’ll meet other survivors and be introduced to some islanders who are planning a ritual to choose a successor for the long dead Himiko.

But it’s not just Lara and a bunch of bad guys on the island. A good deal of supporting characters in the form of her crew mates are there too, and the place is swarming with wildlife… maybe a little too much. One of the things that never appealed to me about the old TR series was the emphasis on battling enemies of the non-human variety.

Personally, I don’t have any interest in hunting deer or shooting the seemingly never ending flow of wolves that apparently infest the island (are there even wolves that live on islands?). But though I’d rather face human foes, there is a point to hunting. And that point being that you can scavenge the remains for materials, so at least there’s that.

Campfires dotting the landscape make for ‘base camps’ where you can upgrade your weapons and dish out earned skill points to improve Lara’s chances in combat and survival. It’s a pretty deep system for an ‘action’ game and one that I was very pleased to find a relatively big part of things.

And about that action- it’s really, really well done. Aiming is a breeze, as is firing and taking cover- that last part which works better than in pretty much any other game in recent memory. I used an Xbox 360 controller when I played and it worked flawlessly. Simply holding LT readies your weapon and pressing RT fires. In the case of the bow and arrow, it’s a little different, but no less simple and elegant.

The bow is an integral part of Lara’s arsenal as it’s perfect for silent kills when you can’t get close enough for a melee. In its case, LT readies, RT draws back and then releasing RT fires. Simple and easy to use. Lara also has a ‘survival sense’ that’s akin to Batman’s detective ability in the Arkham games. At times, I was very glad to have it as objectives weren’t the easiest to spot at times.

I mentioned the cover and it’s one of my favorite parts of combat so I’ll get a little deeper into it. Moving close to a wall enters Lara into active cover. That in and of itself isn’t overly original, but it’s the way that it’s done that is. There’s no sticky feeling when you get into cover and you don’t have to press anything to leave cover. Lara just kind of glides into and out of it. It’s super-well done and I hope more developers pick up on it.

One thing that I’m still hoping will one day go away though are ‘quick time events’. There are a decent amount of them in TR and I can’t say I’m ever really happy when one shows up. They just feel… lazy somehow. To be fair, they are a relatively small portion of the gameplay, I only bring them up because they’re a bit of a pet peeve of mine. The overall controls are certainly nothing to complain about.

And there’s really not much to complain about as to the presentation in Tomb Raider either. The visuals go from really nice to drop dead gorgeous. More than once I actually had to take a moment to stop and gaze out upon one of the beautifully rendered island locales because it was just so darned pretty. Much has been made of Lara’s new TressFX too, but that was a little bit of a bump in the road for me.

TressFX gives longer hair (like Lara sports) a definition that hasn’t been seen before by animating it to an almost individual strand level. It seems like a cool idea, but I couldn’t get it working on my system to save my life, so it was a non-issue for me. And there were other problems too.

Tomb Raider crashed completely a few times and the opening cinematic was totally unwatchable- it crashed the game every single time I tried to let it play. These kinds of things do happen in PC gaming since everyone has different rigs and different capabilities, but it was extremely aggravating nonetheless. Lets just say ‘thank the gaming gods Tomb Raider has autosave’ and leave it at that.

There are no problems with the audio though. The music is beautifully done and seems perfectly paced and paired to the on screen action. Likewise, the voice cast does an excellent job with the terrific script and the new voice (and face) of Lara Croft, Camilla Luddington, is top notch.

So aside from the technical issues and a totally unnecessary and bare bones multiplayer mode (please stop, not every game needs multiplayer – I could not agree more – ed), Tomb Raider is a great time. Be aware that if you’re a fan of the series already you might have some minor quibbles, since it seems that Crystal Dynamics has indeed changed Lara pretty drastically from what I’ve seen of her previously. She’s a lot more realistic and a lot less of a superhero.

If you’re fresh to it though, you’ll like Tomb Raider just fine. The graphics are spectacular in places and never really disappointed me. There were some technical flubs, and there are some things I would have done differently design wise, but Tomb Raider’s strengths outweigh its weaknesses by a long shot.

Applause for Crystal Dynamics as they did an excellent job with this one. They’ve given new life to an ageing series and it’s going to be a lot of fun to see where they Lara goes next.