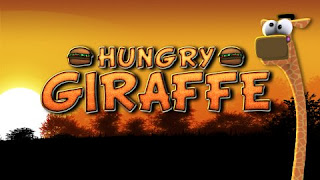 I was not the greatest fan of the game the first time I played it, and yet I keep coming back for more. Every single time I find myself addicted and playing for hours at a time. After the first couple of plays it becomes something as a quick time waster, and yet I come back to it. I guess that is the very definition of a good casual game.

I am guessing that the PlayStation Vita version is intended to be the definitive one, as the Vita versions of The Game Atelier’s Flying Hamster and Sunflowers is. There’s the gorgeous high definition visuals, there’s the trophies – yep, this is one of those cheap, full-featured mobile games that trophy hunters can get stuck into. 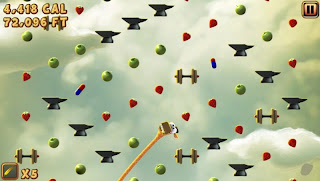 The high quality visuals do really work for this game, which is all about being cartoony and charming. The giraffe has personality (especially when bonked on the head by a anvil) and the food pickups spin around invitingly. The game is repetitive – eat food, and the Giraffe’s head will continue to move forwards and the game will continue. Stop eating food and the head will drop off and it will be game over. It’s like an endless runner, but with MacDonald’s thrown in. There’s nothing inherently wrong with that, but high-quality visuals and personality are essential for giving the game long-term value. From that perspective this version of Hungry Giraffe is the finest.

In fairness to the developers, Hungry Jackal, there’s been real effort to add more stuff to a game that was so simple that it was going to be difficult to do so. There’s powerups that people can purchase with the “calories” (points) they accumulate while playing the game. There’s those trophies, and there are two different ways to play – motion controls and traditional buttons. 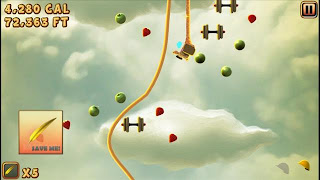 The more cynical will claim that these powerups are there solely to drive players to the microtransactions that have worked into the game (and were not in the early versions of the game, it must be said). Players can hand over real cash for extra calories, and the powerups are expensive. It is a huge grind to earn the basic powerups through regular play. But, because the powerups are not essential to enjoy this game I never felt the need to buy into these microtransactions, and I still had a good time.

Hungry Giraffe is good, clean, simple fun. It’s not more than a mobile game, but because this looks so good in Vita-style HD I’m happy to concede that this is the definitive version of the game. Nothing essential, but hardly a waste of money.

Interview: Paul Turbett on bouncing back after a disaster