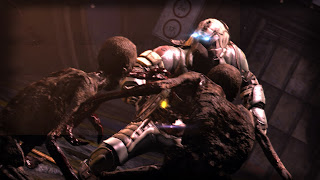 When I start playing a horror game I have a few very, very basic requirements in order to have a good time. Firstly, I expect to be frightened. Secondly, I expect to be challenged. After all, it’s a little hard to achieve my first requirement if I feel like I’m invincible.

With that in mind, unless my tolerance to fear has jumped tenfold since I played Dead Space 2 a couple of months ago, I can safely say that Dead Space 3 failed to give me a good time. Dead Space and its sequel might have relied on the jump scares a little too much for their own good, but it managed to make me jump. By contrast, Mass Effect 3 had more frightening moments than Dead Space 3.

In fact, I secretly suspect that Dead Space 3 was an application to EA by developers, Visceral, to take over development of Mass Effect 4. For the first hour of the game (and it’s not an overly long game if you’re sticking to the narrative), Dead Space 3 is wall-to-wall action in deep space. There’s space jumping (complete with ridiculous moments where the hero is floating through space without a mask), and there are grounded moments where your enemies look human rather than monstrous (there’s a cult in the game, see). The action is not as elegant as what we saw in Mass Effect 3 as it lacks the strategic cover system but it’s functional. And, as though admitting that this is like the somewhat-gritty Mass Effect sub-story, there’s even the Mass Effect N7 Armour up for grabs as a bonus if you have played Mass Effect 3. 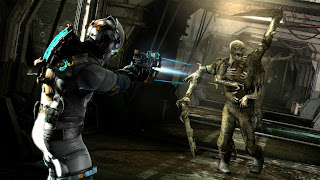 Most laughable of all though is the music. The opening theme (and many of the in-game music tracks) sound like something Danny Elfman came up with for a sci-fi film. It’s high quality, but it is completely inappropriate for this kind of game. By the time the music dies down and the game’s atmospheric noise become all that you can hear the mood is irreparably shattered.

After that first hour Dead Space 3 settles down into something a little more resembling a proper horror game rhythm, but the point here remains – this is more like a space opera-RPG than an actual horror game. The weapon-crafting system doesn’t help break away from that association. Not only does this system allow you to create spare ammunition – which immediately kills any pretense the game has to survival horror, but it also allows you to make some incredibly powerful weapons by grinding up materials. It’s fun from a meta-game point of view and it’s also fun to run around slaughtering enemies like they are peons from a Dynasty Warriors game, but is it worth killing the game’s atmosphere for? No. The Dead Space games that I appreciated greatly – especially the original – are tense, atmospheric games with a genuine claim to horror. 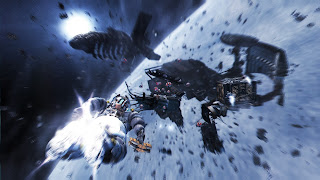 The final nail in the coffin is the co-op. Co-op is a pet peeve of mine in horror as the simple act of adding a buddy in to watch your back utterly ruins the atmosphere of isolation that is required for good tension-building. The fact that levels then need to be built around the co-op experience also makes it less of a game when played solo. It feels like there’s a piece of the puzzle missing, and that dampens the enthusiasm to go it alone.

What we see in Dead Space 3 is what we saw happen to the Resident Evil series – both franchises have hit such sales expectations that the developers can no longer afford to risk upsetting anyone. Sterilising the experience to appeal to the mass market works for shooter games like Call of Duty because all people want to do with those games is point a virtual gun at something and fire away. People play horror games for intangible elements – atmosphere, challenge, tension. You can’t incorporate these elements without upsetting a section of people, and that doesn’t gel with big budget games. 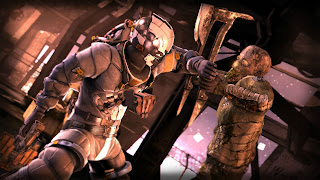 I didn’t jump once while playing this game and again that might just be that I’ve magically developed a resistance to scary stuff, but I suspect the fault is more on the game’s side of things. Yes there are end-game features like new game+ which limit ammo and up the health of enemies, but that doesn’t make the game scarier – I’ve already played it and I know what’s coming before it happens.

All of that said if you strip away the expectations, Dead Space 3 it a technically proficient and entertaining shooter. There’s a nice range of weapons, and there’s a certain satisfaction in constructing your own weapons to take on the enemies with. It’s a gorgeous looking game too, and there were moments where I would find myself staring out of the window of the spaceships and admiring outer space. The voice acting is brilliant and the music, as inappropriate as it is for a horror game, suits a generic sci-fi shooter perfectly.

But I came into Dead Space 3 expecting a horror game. My expectations were not matched and so I am disappointed. Sorry EA, but please for the love of God don’t ever throw a big budget at a horror game again.