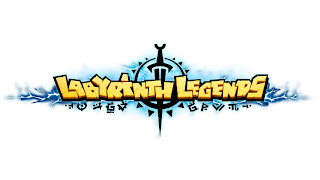 Creat Studios is no stranger to PSN. In fact, it has got so many titles on Sony’s downloadable service that it got its very own shelf within the digital store.

From Smash Cars to Mushroom Wars, this is a company that is not afraid to tackle new genres. With Labyrinth Legends, Creat brought a cutesy top-down dungeon crawler to the service that brings a Nintendo-like style along with it. While it definitely would fall under Nintendo’s “Seal of Approval,” it is a few missteps short from the quality of Nintendo’s first party titles – meaning it’s flawed, but there is still enjoyment to be found in these dark and err… charming dungeons.

Let me just level with you right here. Labyrinth Legends did not sit well with me for the first couple of hours I spent with it. Its charismatic graphical approach is wholly appealing and the soundtrack is not only captivating, but quite funny at times too. Also, the isometric view is reminiscent of Nintendo’s old-school series, The Legend of Zelda – minus the huge overworlds – and the simplistic controls/gameplay should all just put me in a dreamy mood of pure nostalgic satisfaction. At first, this wasn’t the case. In fact, it brought back another nostalgic moment of yesteryear: one of extreme frustration and the desire to throw a controller at a wall.
Some level of frustration is expected to be had when it comes to roguelikes, but not when it comes to the controls, which is right where my prime frustration stems from. The simplistic control scheme finds two attack buttons (Square and Triangle) at play here, with the weak attack being a quick sword swipe and the strong attack being a swirling spin attack. This is all fine and dandy until you try and move forward and use a weak attack on an enemy, only to find your courageous hero performing a lunging overhead sword attack into a swarming pack of enemies, or ever better – right off the small pathways and into an endless pit. Every single time your try to move your character forward when using the standard attack button – you guessed it, lunging overhead sword attack. Like any good game of this ilk, deadly contraptions (e.g. speeding saw blades, spike pits, etc.) and questionable pathways are everywhere. Unexpected and uncontrollable forward jumps aren’t only a frustration, they’re flat-out deadly. 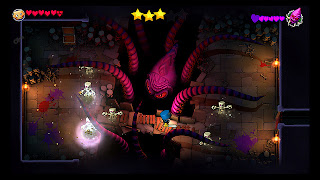 Control woes go a step further too. Aside from a dash move (when you actually want to dash forward), you can block to infinity, regardless of the enemies attacking point. The game enjoys nothing more than to swarm you in enemies, because holding the block button and spamming the spin attack over and over (and over) again is apparently supposed to be loads of fun. Well, it isn’t.
Okay, I started this review off level and then straight down a hill of frustration, because that’s exactly how it was for me in my time reviewing it. It was at this point where I became so frustrated with Labyrinth Legends that my desire to keep playing was minimal, yet it was also about this time when the game started climbing uphill for the first time and I actually started to have fun. Now that I’d become somewhat used to the (questionable) controls, I started to find myself thoroughly enjoying the expertly designed levels. Each level has five Stars that can be obtained and these are in turn used to unlock new, more challenging levels. But each level also holds hidden Stars, which could be tucked behind a hidden pathway or even found by finding creative ways to dispense of a horde of enemies. Running like a coward away from an enemy horde only to accidently trigger a floor switch and burn them all to a crisp is not only funny, but satisfying when you’re rewarded for it.
This gameplay formula brings with it a hefty amount of replay value, which is needed, because the game is a little light on content, with only 16 levels to crawl through. While the initial few are relatively easy to trudge through, they get longer and harder quite early into the mix. A few of the levels even offer up brain twisting mazes to think yourself through, which is a nice change of pace for the genre. There are even a few bosses to defeat here too, but most of these come at the end of long levels without checkpoints. Realizing that you’ll be replaying these long levels numerous times because of the overly difficult bosses and their constant enemy swarms is again… frustrating. 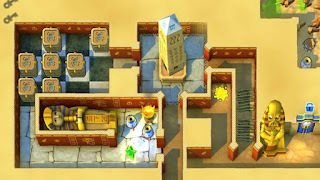 Maybe this last irritation is just nit-picking for a $10 downloadable title, but when you have to access the internet to download the game – why restrict the multiplayer to local only? Maybe this was another attempt to be Nintendo-like (there are several Nintendo references in the game itself outside of those I’ve previously mentioned), but it’s yet again another miscalculation in my opinion. Don’t get me wrong, what’s available is good fun and will have you whacking and smacking baddies with a few mates for hours. But the game isn’t developed for a younger audience and online multiplayer should have been a no-brainer here.
Before I go into my concluding statements, I do want to say this: after finishing up Labyrinth Legends, I feel like it was intended to be so very much more than what was released. Maybe Creat Studios ran out of time, money or both – I don’t know – but I can’t help shake the notion that this is only half of what it was intended to be.

Creat Studios’ Labyrinth Legends attempts to bring a mix of Nintendo-like games and the roguelike style to the PlayStation Network, but it comes up short of the greatness that it takes so much of its inspiration from. Those looking for more of an arcade styled dungeon crawler will likely find the most enjoyment here, but experienced crawlers will likely find frustration. There’s good fun to be had in these deadly labyrinths, but it feels like it’s only half the journey.

The week’s specials on Play-Asia